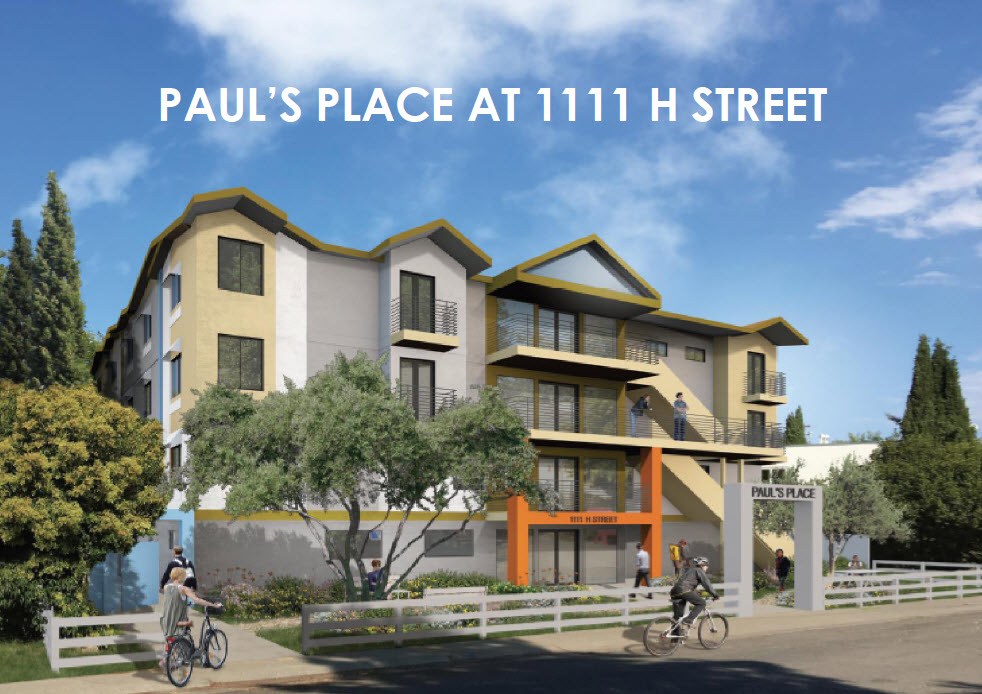 Having watched the discussion earlier on the Respite Center, we see two very distinct points of view in this community on the homeless and mentally ill. You see those who are committed to evidence-based approaches to fight homelessness, and those fearful of the homeless and mentally ill and wanting them as far away from their homes and any impact on their personal lives as possible.

The Davis community is really of two minds when an issue such as Paul’s Place comes up.  On the one hand, there are large numbers of people who have stepped up to make this project possible. One of the developers of the project told me this week they raised $2.5 million in advance of the project—that’s really a great testament to this community.

On the other hand, we also see people complaining about putting homeless into their midst, fearing that having concentrations of mentally ill people nearby will lead to a loss of safety.

This played out at the Planning Commission on Wednesday.  City staff noted they received more than 100 emails—a high number—and most of them were positive.

At the same time, we keep getting these comments where people worry about putting mentally ill people in neighborhoods, and they worry about the size and scope of a project—it’s troubling to hear this time and again. And unfortunately it’s not just a few people.

On Wednesday, of the public commenters who called in, many complained about the physical size, scale and location, and also questioned the number of residents planned for the project, given the infection potential posed by the COVID-19 pandemic.

One commenter urged the Planning Commission to “consider the many negative consequences both for the homeless and for the city of Davis.”

He argued that “50 percent of the homeless have mental illness, it is better (f0r) them to be distributed in smaller care facilities.” He said that Paul’s Place will have 15 mentally ill individuals

on the site, where “six is the national average (and) is better for their care and costs less too.”

Another caller agreed that we need safe spaces for the homeless and mentally ill. However, she argued, “I do not feel that the Paul’s Place proposal has adequately considered the potentially negative impact a project of this size and concentration could have on the residents themselves as well as on the surrounding community.”

She argues this is larger than Pine Tree Gardens and that facility has over twice the number of mentally ill clients as “recommended in the scientific literature.”

She also cited the impact of COVID-19 on the community, and added that “the homeless are at higher risk for infection of COVID-19.” She asked, “How can you assure us, if this project is accepted, that concentrating 32 homeless people in this same large building, where half of the folks will be mentally ill and initially not be medicated, will be safe for them?”I find it interesting that here we have professionals who have been working with the population for decades and yet the neighbors are trying to argue that they know best. They are citing scientific studies.

I was glad to hear Greg Rowe push back on this.

Many attempted to use this as a reason to deny the Mitigated Negative Declaration.

But, as Rowe  pointed out, “the negative comments are to some degree not germane in terms of asking us to not accept the CEQA document.” The kinds of things cited, like the degree of mental illness or concentration of people with communicable diseases, “really aren’t germane to the environmental documents.”

The strangest comments by neighbors were ones where they are citing industry guidelines for optimal numbers of mentally ill people at a location.

There are a number of errors in that way of thinking, but perhaps the most basic is that the people who have put together this proposal are in fact experts who have decades of experience with issues of homelessness, mental illness, and housing for such populations.

They were able to design a facility based specifically on evidence-based best practices.  And, in this case, it is a non-profit—they do not have a monetary incentive for doing this.  These experts know a good deal more than an average citizen who has Googled some statistics and cited some studies.

Finally, people are using COVID as a reason not to do a whole variety of things in this community.  The COVID concerns have become part of the new cachet of stock arguments against projects people don’t want.

Greg Rowe captured exactly what I was thinking when he said “one of the things that needs to be kept in mind is this new facility is going to take some time to build, probably going to be a year or year and half before its ready to start operating” and he views the COVID crisis as “we’re dealing with a temporary virus situation that I don’t (think) should be a cause to slow anything down much less a project that is as valuable and important as this.”

By the time this gets built, the COVID-crisis is likely to be over.

The comment from David Robertson sums it for me: “This is exciting and I hope that other communities will take an opportunity once it’s open and operational to see what can be done with the vision that this whole group has put together.”

One thought on “My View: Paul’s Place Sails Through but Attitudes toward Homeless and Mentally Ill Remain Troubling”