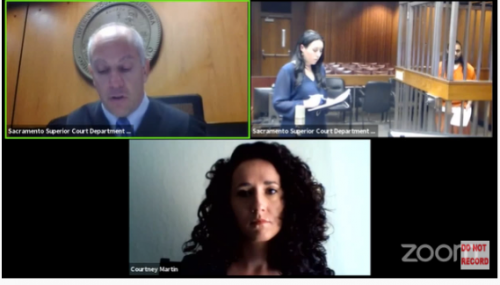 SACRAMENTO – In-custody defendant Lorenzo Ledbetter was sentenced to prison for six years for “pimping” a minor—and his “professionalism” in committing the crime bought him that higher sentence, said the court Tuesday in Sacramento County Superior Court.

The upper term was recommended and selected because of the manner in which the crime was carried out, which indicated “planning, sophistication, and professionalism…the defendant’s prior convictions as an adult or sustained petitions in juvenile delinquency proceedings are numerous and increasing in seriousness,” said Court Commissioner Kenneth Brody.

The matter was referred to the court by the Sacramento County Probation Department for a pre-sentence report. Trigger said she reviewed the report with Ledbetter and found everything in the report to be

The defendant was not eligible for probation pursuant to Penal Code section 1203.065(A), therefore a state prison sentence was mandatory, indicated Commissioner Brody.

There were two other dockets mentioned on the probation report from a matter in 2019, but they weren’t on the calendar and would need to be added. Probation was terminated in light of the prison term.

In addition to the six-year prison term, the commissioner noted that the defendant had custody credits of 127 actual, and 126 good-time and work-time days, for a total of 253 days credit time served to date. The court also ordered that he pay a restitution fine of $1,800. But the fine was suspended unless the defendant’s parole is revoked.

The court ordered restitution to the named victims in this manner under Condition 4 in the probation report, in an amount to be determined. And he also ordered restitution in an amount to be determined to the guardian of the victim named in Condition 5. There was a no-contact order issued to Ledbetter that protects the victim in Count 1 of the case because she was a minor. The order also protects the victim’s families.

At the end of the period of incarceration, the defendant will serve three years probation. If he violates any terms or conditions of parole, parole can be revoked and he may be returned to custody for up to six months.

Share:
Tags:Pimping a MinorSacramento Court Watch
Previous : Yolo Should Be Able to Reopen under New Criteria Announced on Monday
Next : California Takes Another Step Toward Relieving Family Debt