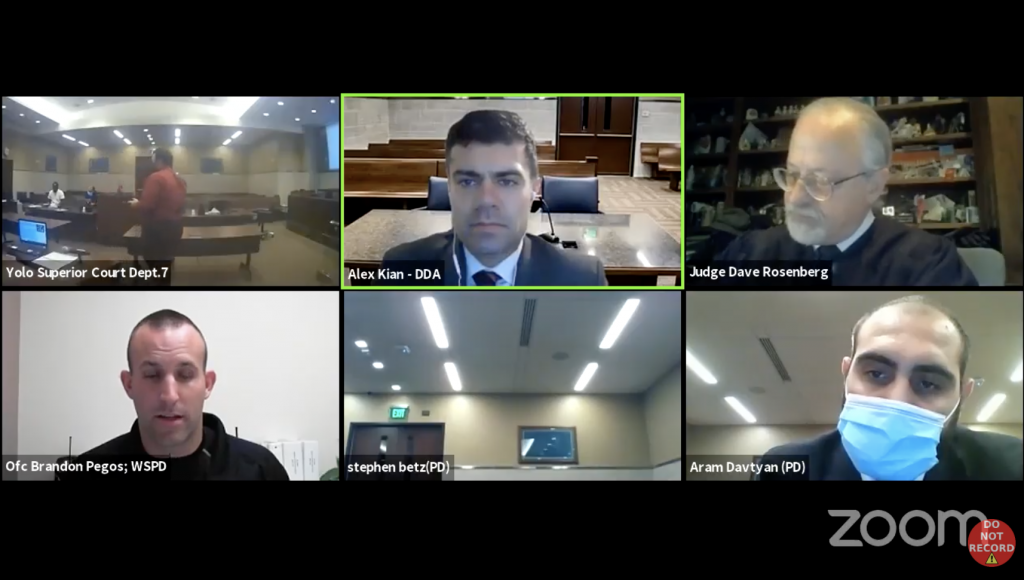 DAVIS, CA – A West Sacramento man faced a preliminary hearing on five felony charges after allegedly striking his wife in front of her child.

On the night of April 22, Officer Pegos was dispatched to a residence in West Sacramento after reports of a physical altercation. There he spoke with the alleged victim, Hinton’s wife, about the incident.

According to the alleged victim, Hinton came to their house drunk and started an argument. He began to yell and throw things at her before picking up an aluminum baseball bat. The alleged victim then ran into her son’s room to protect him, and Hinton threatened to kill her and her son.

Hinton allegedly hit his wife’s legs with the bat multiple times and then proceeded to smash the television and PlayStation 4 (PS4). The alleged victim grabbed her 13-year-old son, and they ran out the door. Once outside, Hinton grabbed his wife’s hair and smashed her face against their truck multiple times. He then dragged her body across the ground as she yelled for help.

Hinton demanded the car keys, and she told him that they were inside the house. After he drove off, she ran to her neighbors for help. Officer Pegos recalls observing swelling and redness on her legs and head, as well as an abrasion on her elbows. She did, however, decline medical treatment.

The next witness was Officer Kenslee Viera, also a peace officer at West Sacramento Police Department. Officer Viera spoke with the alleged victim’s son, who witnessed the altercation.

According to the child, he was eating microwavable pizza in his room when he heard the defendant come into the living room and yell at his mom. He then saw Hinton strike his mom with the baseball

bat five times, before destroying the TV and PS4.

Based on personal experience, Officer Viera estimated that the cost of the PS4 is around $400.

During the fight, the alleged victim told the defendant that he did not care about her son, to which he responded, “I’ll show you how much I don’t care about your son.”

The child also told Officer Viera that there was a previous incident back in November when the defendant cut his mom with a kitchen knife.

Kian called forth the next witness, Officer Louis Esway, who interviewed several witnesses who saw the incident take place outside.

One witness that Officer Esway spoke to was a neighbor who tried to break up the fight. Fearing for his own safety, the witness called 911 and sheltered the alleged victim in his home after Hinton drove off.

In his statement to the police, the witness said he saw the defendant throw the alleged victim onto the ground and drag her across the ground.

When asked to identify the defendant in the courtroom, Officer Esway said he recognized Hinton, who was still wearing a mask, through the Zoom call.

“If I had another African American individual with a similar build and a mask on sitting next to me, would you be able to tell the difference?” asked Deputy Public Defender Aram Davtyan.

The next witness called was Officer Raymond Barrantes, who was the first officer to arrive at the scene. He saw Hinton driving off in a white Volvo with the lights turned off, and he gave him commands to exit the vehicle.

Officer Barrantes described the defendant as extremely uncooperative and agitated during their attempts to detain him. Hinton allegedly refused to get down on his stomach and kept cursing, which led the officers to point their guns at him.

When the officers tried to put a mask on him, Hinton ripped it off and said that they were trying to give him the coronavirus. Eventually he was detained, and dispatch informed Officer Barrantes that the defendant’s driver’s license was suspended.

The final witness called to testify was the alleged victim, Hinton’s wife. According to her, the argument began through Facebook messaging while she was at work. When she came home, she became intoxicated after drinking multiple beers and a pint of Hennessy.

She described the incident as a “mutual fight” as she recalled hitting his head with pliers. She claimed that the defendant did not swing the bat at her or her son and that he never threatened to kill her.

The alleged victim also denied going to her neighbor’s house for help and said that her son was lying in his statement to the police. She said Hinton never punched her or slammed her against the car either. Regarding the photographs of her bruises, she said there were no injuries sustained from the incident.

When asked by Kian as to how she wants the case to go, she said she wants all charges to be dropped, insisting that both she and Hinton were equally at fault. She also says that her uncle, who is a pastor, is counseling their marriage and that their relationship is doing well now.

After the alleged victim was dismissed, Davtyan argued that there is no credible evidence that Hinton hit her, as his body weight of 240 lbs. would have created more obvious injuries. He also argued that since the television and PS4 is Hinton’s own property, he should not be charged for vandalism.

Kian responded by saying that the alleged victim’s testimony contradicts multiple eyewitness accounts, as shown by the police statements.

Judge Dave Rosenberg concluded that the alleged victim’s testimony lacks in credibility and that Hinton will be held to answer for all charges, excluding the count of vandalism.

An arraignment on the information is scheduled for June 5 at 9:00 am.

Share:
Tags:Corporal InjuryCourt WatchYolo County
Previous : Sunday Commentary: We Could Re-Open and Be Relatively Safe – but We Won’t Be, the Way People Are Acting
Next : Community Leaders Ask District Attorney Candidates Their Visions for Public Safety Beyond Mass Incarceration