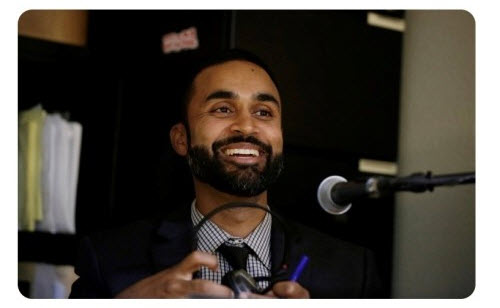 San Jose: The story of Sajid Khan’s blog post, that turned into a tempest for the Santa Clara County DA’s office when DA Jeff Rosen attempted to file a whistleblower complaint over the public defender’s post, blew up nationally as Washington Post columnist Radley Balko wrote an op-ed last Friday and 650 public defenders across the US signed a letter of support this week.

After Rosen announced he was withdrawing the complaint, the Vanguard spoke with Khan about the experience.

In the column, he argued that, in addition to unleashing “our anger and frustration at police departments across the country for their continued brutality, violence and harassment imposed upon black people,” that in order to “best honor George Floyd” we should “fire our very righteous outrage, fury and ire at District Attorney’s offices too.”

As he pointed out, “it is the DA’s office that is responsible for prosecuting those police crimes or at the very least not endorsing that callous and illegal behavior by using the fruits of those unlawful police intrusions as part of their prosecutions.” Khan published on his own blog, but also submitted to the Vanguard for republication on June 3.

“I wanted to help inform and educate the collective masses that were taking to the street and looking to make systemic change,” Khan said in a phone interview with the Vanguard.  “I wanted to highlight the role of prosecutors in perpetuating police violence and in perpetuating the overall dehumanization of black people in our communities.”

He said he felt like DA’s offices were floating under the radar to the people who were rallying in the streets, where people directed their attention to police departments and City Hall but

were overlooking the role that DA’s offices play in perpetuating police violence.

As he explained when police departments are “misbehaving,” it is “DA’s offices who are arbiters of their actions.”

The problem from his perspective is that “DA’s offices don’t hold police officers accountable for those behaviors and in return perpetuate those misdeeds by police officers.”

But Jeff Rosen, the Santa Clara County DA, saw this as a threat.

He responded to his staff with an email, arguing that he found the posts threatening to his office and that he had filed a whistleblower complaint against Khan, apparently in hopes of spawning an investigation.

Rosen charged, “(Khan) endangered the safety of everyone working in both the East and West Wings of this building. We acted immediately through our Bureau of Investigation to secure the building and take steps to protect everyone’s safety.

That was a step that Sajid Khan said he could never have imagined.

“I was surprised, I was offended,” he said, but also, “I was laughing in some ways to how unreasonable it was for Mr. Rosen to claim that I had an intent to incite to destruct and he won’t stand by while someone endangers his staff.”

He said, “To me it was comical because it was so unreasonable.

“The post in and of itself was not violent or threatening,” he said.  “I used some strong language, but the language matched the call to action.”  But violent, he continued, “that’s beyond my imagination, I don’t think that’s reasonable.”

He said ultimately what he wanted was people to hold them accountable, but in the voting booth.

“It was a call for civic and civil action,” he said.  “They were an expression of free speech, they were editorial words, and just that.”

But for Khan, Jeff Rosen went beyond just comical to threatening.  The language he used was indicative of Khan having committed a crime, been a terrorist.

“I was offended by that because it’s not lost upon me,” he said, noting that he is a Muslim, Brown-skinned, bearded man and was painted as violent and being a terrorist.  “It was very upsetting and is not okay.”

The use of the county whistleblower clause took the issue even further.

“To me it was an abuse of power, it was an attempt to bully and silence me,” he said.  “To silence dissent against him and his office.”

Whistleblower seemed like an odd avenue to pursue, as this did not seem to fit the definition of the statute.

“It does seem to me that this was an intent to get a pound of flesh,” he said.  “Or make me think twice the next time I go against his office.”

But in most ways this appears to have backfired.

“I’m actually grateful that he chose to pursue this complaint,” he said.  “It ultimately highlighted what I was trying to discuss in my original post.  It illustrated the abuse of power that prosecutors perpetuate all the time across our state.”

“One after another, these groups were really galvanized and activated,” he said.

In essence, the actions of the DA prompted a further activation of numerous individuals in various communities to hold DA’s offices accountable.

As was the case when the Yolo County DA Jeff Reisig attacked Public Defender Tracie Olson, communities rallied around the public defenders and made use of social media and other technology to do so.

“This is a moment in our country where people are not happy and are angry and frustrated with how our system operates, the status quo is not going to be acceptable anymore,” he said.  “For the moment, DA’s offices are not going to be immune from being held accountable and held to task.

“The overwhelming statewide and national response to this relatively local story was really incredible,” he said.

Eventually the support forced DA Rosen to back down.  On Tuesday he issued a statement, “I am withdrawing the county complaint that addressed workplace safety and security issues caused by a county employee’s social media posts. The complaint has become a distraction from a vastly more important aim: that we confront racism.”

But by then, he unleashed forces he may have trouble controlling in the future.

Share:
Tags:Jeff RosenPolice ViolenceRadley BalkoSajid KhanSanta Clara DA
Previous : Progressive Cruises to a Blow Out in a Key NY DA Race
Next : School Board Narrows the Selection Down to Six to Replace Cindy Pickett