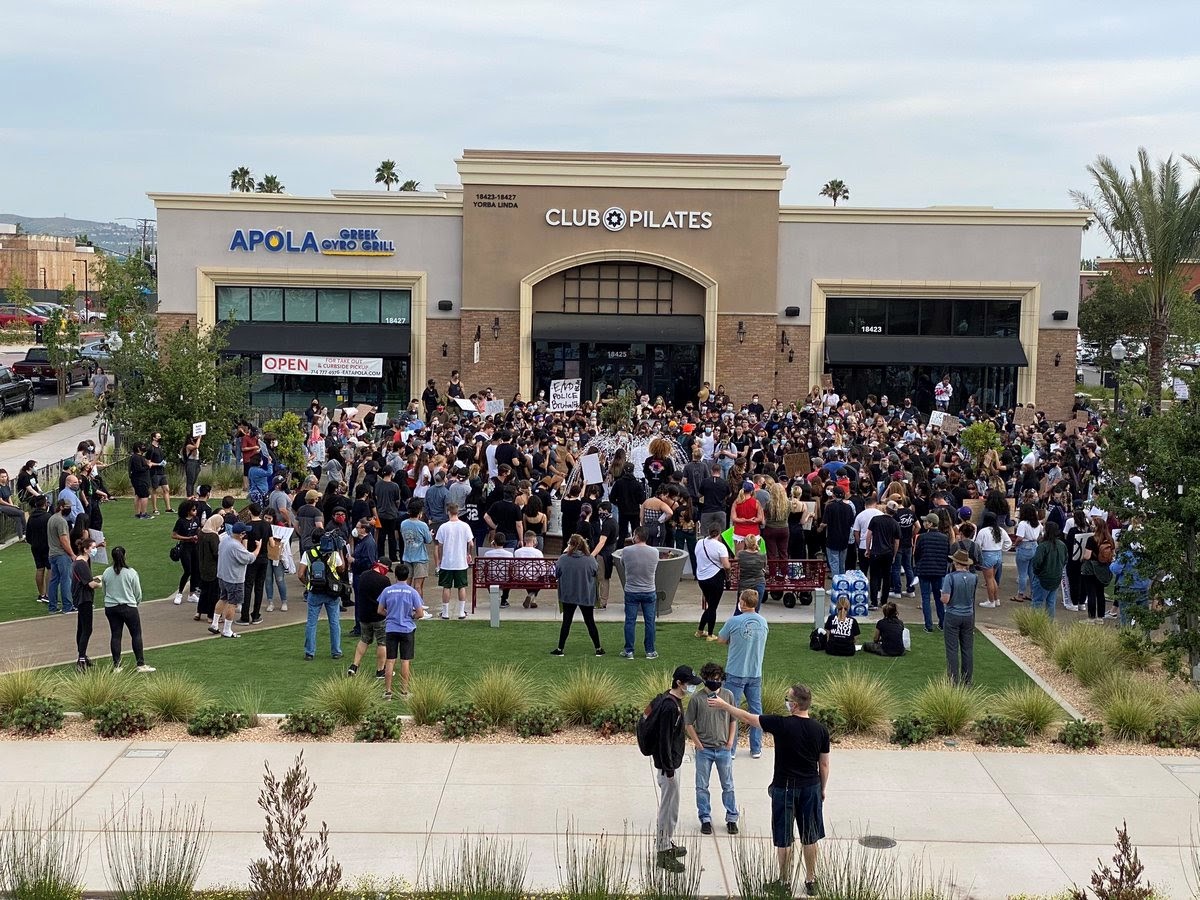 YORBA LINDA, CA – Hundreds of individuals showed their support for George Floyd and the Black Lives Matter Movement by gathering together in the city’s downtown area for a peaceful protest.

George Floyd was murdered by Minneapolis police officer Derek Chauvin along with three others May 25, 2020. And, over the past week and a half, hundreds of protests have occurred in all 50 states in response to the incident. And many worldwide.

Floyd was one of the many black individuals who have lost their lives at the hand of the police, noted Black Lives Matter, a human rights movement founded in 2013, adding that “we continue to fight until

white supremacy no longer permeates every corner of this country—until we can live full lives, freely.”

That’s the message that is the focus of activists across the country and around the world through protests. While many of these Black Lives Matter protests have occurred in large cities like New York, Atlanta, London, and Los Angeles, several have been organized in smaller, suburban areas like Yorba Linda in California.

The protest in Yorba Linda began around 4 p.m. on June 2, 2020, eight days after George Floyd was killed. The news of the event was spread through social media, primarily on Instagram and Twitter.

“Stand in solidarity with Black Lives Matter and let your voice be heard,” one flyer read. The protest was advertised as a peaceful event and remained peaceful throughout its entirety.

A few hundred people gathered on Main Street, in the city’s downtown area, with signs advocating for racial justice. 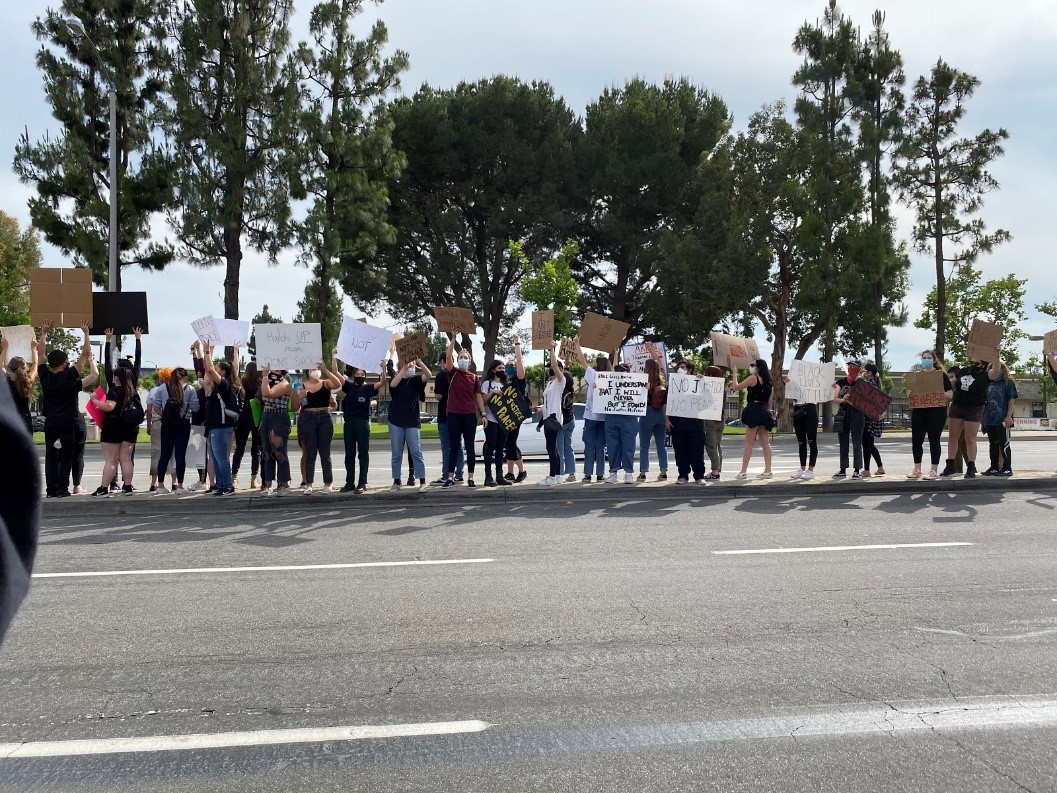 “I can’t breathe,” George Floyd’s last words before his death, were written on some of the signs being held. Others displayed the lines “no justice, no peace,” “black lives matter,” and “skin color is not reasonable suspicion.”

Cars drove along the busy street, honking in support of the protest while participants chanted, “What’s his name? George Floyd!”

During the protest, the group also knelt in silence for 8 minutes and 46 seconds, symbolizing the amount of time George Floyd was held under the knee of Officer Derek Chauvin, who is now being charged with second-degree murder. Some participants knelt with fists raised and their signs up while others held up peace signs.

“I know these are dark times but I am so excited for our youth. We can’t stop fighting!” exclaimed one individual on Twitter, in reference to the local protest.

The majority of protesters wore face masks in compliance with the CDC’s recommendation to slow the spread of COVID-19. However, most individuals did not practice social distancing at six feet.

Many on social media were pleasantly surprised at the success of the event. Yorba Linda is known for being a predominantly white city—white residents making up 60 percent of the population, while black or African American residents represent about 1 percent, according to Data USA.

The city has a reputation for participating in conservative politics. According to the Orange County Register, in 2018, Yorba Linda was “one of only two Orange County cities with a majority Republican voter registration – 50.7 percent,” while Democrats made up 22.2 percent of the population. 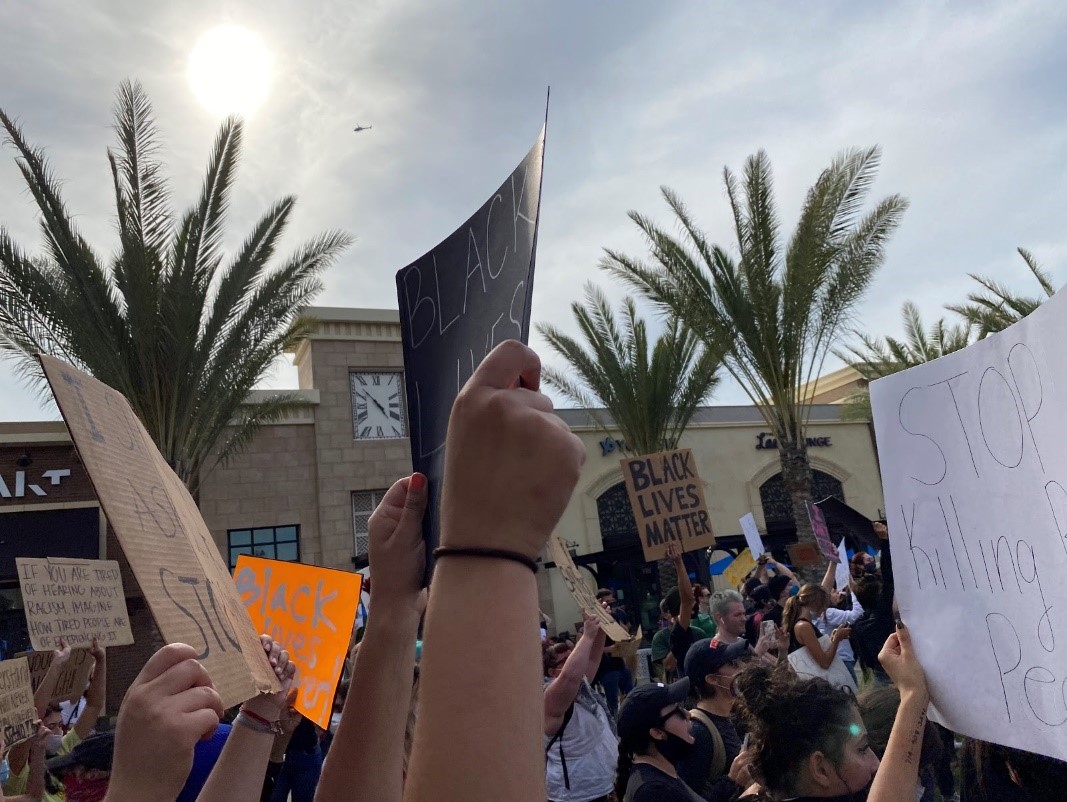 Yorba Linda also happens to be the birthplace of the controversial Republican President Richard Nixon. A presidential library and museum in his honor currently operate there.

“We thank all who expressed themselves peacefully last night while condemning hatred, brutality, and racism: none of which are welcome here in Yorba Linda,” said Mayor Dr. Beth Haney, in a message from the city.

“We give deep thanks to the men and woman of the Yorba Linda police services, and those from other agencies whose careful preparation and planning allowed for last night’s peaceful expression,” Dr. Haney added.

The Orange County Sheriff’s Department (OCSD) and Yorba Linda Police Services have not made statements.

One participant who attended the protest, Camille Sparacio, spoke with the Davis Vanguard.

When asked what message she was trying to get across by attending the event, she said, “I feel like I wasn’t doing enough on my part to help the movement. Spreading awareness and passing around petitions was a great way to help, but I wanted to go out to those protests and physically show my support for the BLM [Black Lives Matter Movement] and help spread awareness in another way.

“There’s power in numbers and I wanted to help in any way possible,” Sparacio emphasized.