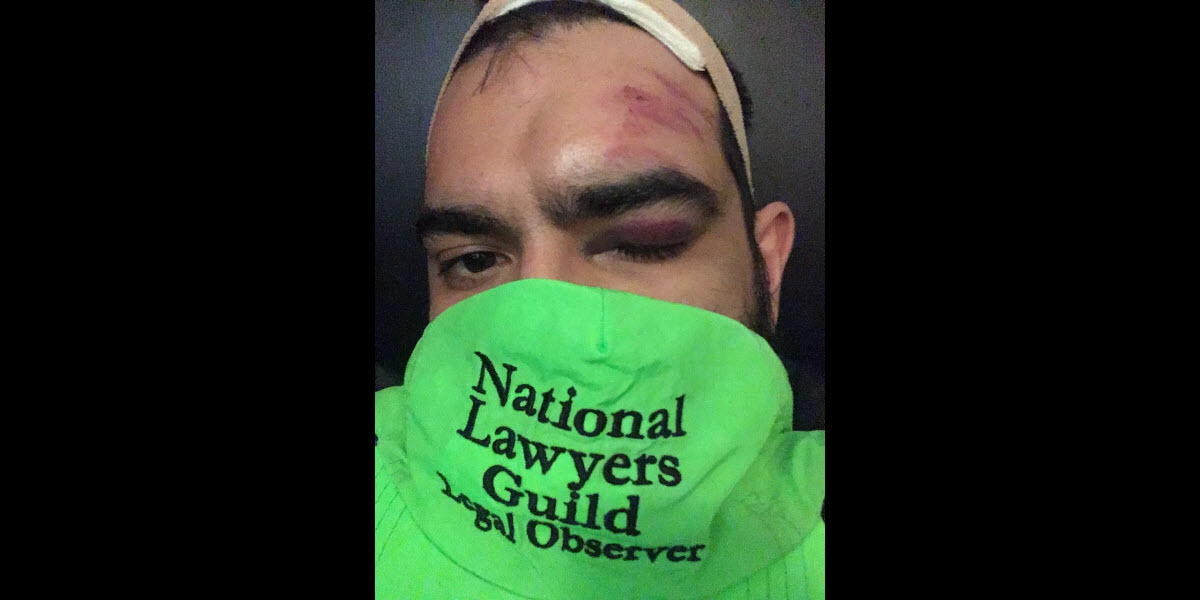 SACRAMENTO – This reporter was a combat correspondent in a real shooting war. And, what took place late at night and in the early morning hours on Sacramento’s downtown streets over the past nearly three weeks is about the closest you’ll get to a wartime “experience.”

weapons, with their hands up.

Hundreds, sometimes thousands of people marched and protested in the streets, joining hundreds of thousands, possibly millions of people in the U.S. and around the world demonstrating against the killing of George Floyd in Minneapolis and police brutality overall.

Thursday, on behalf of four people seriously injured by the dominating show of force on unarmed civilians by a militarized police force, civil rights attorney Mark Merin filed a federal class action complaint against the city of Sacramento, the Sacramento Police Dept, Chief Daniel Hahn and an unknown number of “responsible officers,” most of whom were not identifiable because they reportedly hid names and badges.

Merin said the plaintiffs represent a “class of all persons shot by the police and seek to end the use of the projectiles which cause both death and permanent disability,” noting that it’s the “policy or custom of unreasonable and excessive use of force by firing rubber bullets to strike and injure non-violent demonstrators exercising their constitutional freedom of speech.”

The federal complaint notes that “officers took to the streets in droves, armed for war against their own citizenry, and employed severe and unjustified excessive force against peaceful, non-violent demonstrators.”

The city of Sacramento, the complaint alleges, maintains “an unofficial custom whereby their officers are permitted to employ unconstitutional tactics against persons in or around the area of a demonstration/protest—particularly as it relates to demonstrations/protests concerning the subject of police violence.”

In fact, police officers often give a warning before moving in on protestors, threatening them with the use of “chemical” and other weapons if they do not disperse.

“This gross use of excessive force against protesters is an escalation of police violence which shows a decision was made at the highest levels to employ dangerous projectiles in an attempt to discourage protesters from exercising their constitutional rights to demonstrate,” said Merin.

“Something’s got to change,” Merin added, “defunding and disbanding the police, which many communities are demanding, would be a good place to start.”

According to the complaint, Daniel Garza, a law school graduate and National Lawyers Guild Legal Observer who has observed and documented police conduct at demonstrations across the country, was observing Sacramento police officers as they hurled flash bang grenades and tear gas canisters at demonstrators as they moved down J Street in downtown Sacramento.

Officers reportedly ordered Garza to get in front of the police lines even though he announced that he was not part of the demonstration. Wearing a fluorescent green hat identifying himself as a legal observer, Garza…was shot in the forehead at point blank range by an officer who targeted his head.

“Severely injured, Mr. Garza was helped by a medic to a position of presumed safety on a stairway near 21st and J Streets,” where medics administered aid and were bandaging his head when officers again opened fire on them.

Garza, a Navy veteran, was rushed to the Veterans Administration Hospital at Mather and treated for head wound and concussion. The complaint notes that “he continues to exhibit troubling symptoms of disorientation and memory loss.”

The National Lawyers Guild (NLG) Sacramento Chapter denounced the “indiscriminate brutality used by law enforcement against nonviolent demonstrators,” pointing out that, while scores of offices peppered a few protestors and non-participants like Garza, looters broke into businesses downtown.

Another plaintiff is Thongxy Phansopha, who said she was delivering food and water to peaceful demonstrators on May 30 when “they were struck by at least six projectiles, fired at close range. Three of the bullets hit their face and head causing them to undergo life-saving brain surgeries.”

Plaintiff Joshua Ruiz was “demonstrating against wanton police violence when, on May 31, near Capitol Avenue and L Street, Sacramento city police officers started indiscriminately firing their weapons into the crowd of protesters. Several projectiles struck Mr. Ruiz and he fell to the ground. While he was writhing in pain on the ground, police continued to fire directly at him, striking him several more times.

“Mr. Ruiz was admitted to the hospital for numerous and severe injuries caused by his multiple injuries caused by the projectiles fire at him. One of the injuries is a lacerated liver which, had he not received life-saving medical attention immediately, could have been fatal. He remained in the hospital for several days but even now, three weeks later, continues to experience great pain, discomfort and limitations,” according to the complaint.

The pleading also chronicles the injuries to Elisabeth Crouchley, who, near 20th and J Streets early on May 31, observed police firing indiscriminately at demonstrators, and saw several protesters struck by police fired projectiles.

“She was 25 feet from officers as she turned to run and was struck in the back six times by officers who clearly targeted her as she fled. She had both hands in the air and was screaming ‘don’t shoot, don’t shoot’ when she was struck by additional rounds in the head and buttocks. She was treated in a hospital emergency room where staples were placed to close the laceration in her scalp,” according to the complaint.