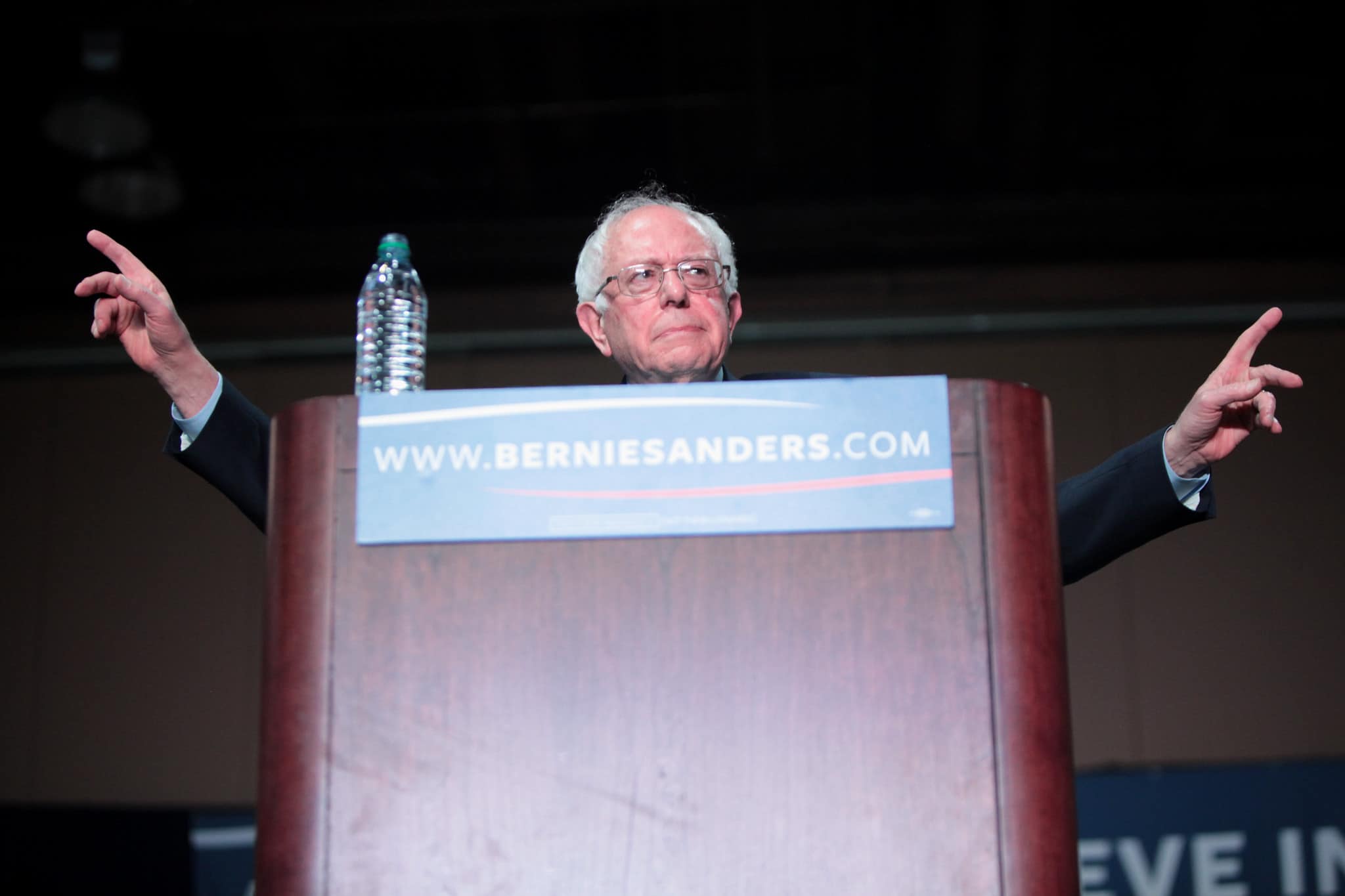 In an attempt to unite the centrist and progressive wings of the Democratic Party, presumptive 2020 presidential nominee Joe Biden and runner-up Bernie Sanders put together six “unity task forces” to shape policies, with the following respective areas of focus: climate change, education, the economy, healthcare, immigration and criminal justice reform. For each task force, reports Vox, Biden got five picks and Sanders three.

This is a positive for the party’s electoral prospects, after a bitterly fragmented primary. Unfortunately, the people selected for the task forces demonstrate how not only the party establishment, but even an insurgent progressive like Sanders, privilege certain topics over others. The criminal justice reform task force is incredibly milquetoast.

While status quo-shattering progressives like Rep. Alexandria Ocasio Cortez (D-NY) and Rep. Pramila Jayapal (D-WA) are included on the climate change and healthcare committees, respectively, not a single person in the criminal justice reform group brings comparable strength of ideas or clout.

Biden’s five picks are typical of centrists who want to trim the edges of our bloated, draconian justice system without changing anything systemically.

Two are top members of the Obama Department of Justice (DOJ): former Attorney General Eric Holder and former acting assistant attorney general Vanita Gupta. While these figures supported deprioritizing federal enforcement of anti-marijuana laws and expressed some dismay toward the harshest mandatory minimum prison sentences for drugs, they did little to address federal prosecutors’ complete lack of accountability—due to secrecy and their near-unlimited discretion, which they often use to push for very harsh sentences to match the non-mandatory US Sentencing Guidelines.

Biden also chose Rep. Bobby Scott (D-VA), who has a fairly decent track record on opposing mandatory minimums. But Rep. Scott is still a far cry from a fellow Congressional moderate who was not selected: Sen. Cory Booker (D-NJ), who has proposed the return of federal parole and other sweeping changes. To round out his side of the table, Biden chose Raumesh Akbari, a state senator from Tennessee who has accomplished virtually nothing to decarcerate at home, and Symone Sanders, a political aide who defended Biden’s pro-mass incarceration past and has narrow professional experience in this area.

Reformers expected Biden to be weak on decarceration, considering he promulgated the noxious 1994 Crime Bill, among other stains on his record, and has shown little interest in mass incarceration outside of maintaining it.

But Sanders’ picks are where things get devastatingly disappointing.

It’s 2020, not 1990. Even setting aside the many non-law enforcement options for a moment, Sanders had dozens of relatively progressive elected prosecutors to choose from if he wished to balance credibility with moderates with the need for real change. Sanders is familiar with at least several of them, having personally endorsed them.

First things first, Sanders was good to his people—Bamberg was an endorser in 2016 (though he originally backed Hillary Clinton), and Walker worked his Iowa campaign.

Bamberg does have the noteworthy experience of being a civil litigator who has sued on behalf of many of the most high-profile victims of police brutality and killings. Yet that translates only to a limited degree into forming a policy agenda that ends mass incarceration. Thanks to the power of police unions and police willingness to punish any politician who stands in the way of impunity for violence, police are also the hardest part of the criminal justice system to reform.

In terms of bills proposed, Bamberg wants substantial reforms that would make people on parole eligible for lower-level felonies after serving a third of a prison sentence of 30 years or less, or 10 years of a life sentence.

However, many common nonviolent drug felonies are so-called “unclassified” felonies under South Carolina law, placing them into the current “no parole” offense category. Bamberg’s bill gives credence to this bogus idea, noting that people serving time on current “no parole” felonies—like most meth charges, or an 18-year-old sharing heroin with a 17-year-old—would have to serve fully 65 percent of their sentence in prison, and face intensive supervision until the 85 percent threshold is hit. Knowing that his parole reform bill would not pass through a Republican-dominated legislature in the Deep South anyway, Bamberg might still have addressed this as a symbolic gesture.

Meanwhile, Iowa’s Stacey Walker has no substantive criminal justice experience on his resume. Some of his career is certainly admirable, such as his work to help at-risk kids graduate high school. But it seems his most noteworthy criminal justice accomplishment was putting implicit bias training for county prosecutors on the agenda, much to his county attorney’s laughable chagrin.

Finally, there is Chiraag Bains, who has a managerial role at Demos as the director of Legal Strategies. But Demos is not even a criminal justice reform-specific organization. According to Bains’ biography page, only a fraction of his docket is on-topic—and even then it deals with the fringes of ending mass incarceration, such as protecting “voting rights of pretrial detainees and others unlawfully disenfranchised through the criminal justice system.” While admirable, this is probably not what most voters think of when they hear “criminal justice reform”—they think of ending mass incarceration.

To that point, Bains was also an Obama DOJ prosecutor, albeit with a caseload addressing the kinds of people liberals want to lock up, such as hate crimes, arson against reproductive health clinics, and the like.

Sanders could and should have gotten some real innovators in there. There is a large network of progressive criminal justice reform professionals with both a strong grasp on policy and the belief that mass incarceration is an atrocity.

For example, there is the Justice Collaborative, which, despite assisting the occasional awful prosecutor, employs dozens of sharp decarceration-focused lawyers with a tremendous amount of criminal litigation experience. Many of them are former public defenders who are also women of color. Justice Collaborative’s sister organization, The Appeal, has hosted Bernie Sanders himself on its webinars. And then there are plenty of more mainstream but creditable criminal justice reform organizations, like the Vera Institute for Justice, REFORM Alliance, #Cut50 and more.

If task force candidates from these organizations were absolute non-starters for presumptive presidential nominee Joe Biden, because they want to treat people who have committed crimes with too much human dignity, Sanders could instead have turned to an array of “progressive prosecutors.”

Top reform prosecutors like Larry Krasner (Philadelphia), Aramis Ayala (Orlando) and Rachael Rollins (Boston) would have almost certainly picked up the phone as a major political boost. Harris County (Houston), Texas District Attorney Kim Ogg is not that progressive at all—Sanders endorsed her socialist challenger Audia Jones this year—but still probably has more expertise and reformist accomplishments than some who made the cut.

Criminal justice reform always gets the short end of the political stick from national politicians, even those like Sanders. And people—especially people of color who have loved ones locked up for way too long on nonviolent crimes—are sick of it.

“People like me always vote with our conscience, on party lines, but when it comes to criminal justice reform, no one steps up to the plate,” she said.

“Some Republicans have delivered more when it comes to cutting the prison population,” Caldwell continued. “It is ironic for Democrats to speak about justice when we are simply suffocating from a lack of criminal justice reform. It’s never going to rise from the grave unless we enact real policy solutions coming from people who’ve experienced incarceration firsthand or lived through it with their loved ones.”