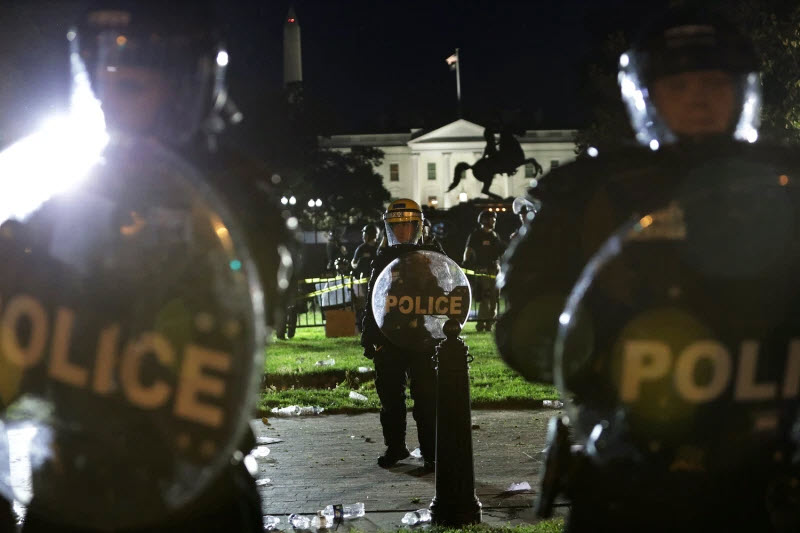 Why do we need police at the protests against their very existence?

Wouldn’t it be safer and smarter to just let our citizens and people express themselves and not pit them against already trigger-happy, testy, easily insulted armed cops whose careers and jobs are being called into question?

Isn’t this the moment to start policing our community differently by not actively policing them—especially with armed cops?

No more, or at least less, “proactive” policing.

We need to shift away from police contacts with civilians that are not necessary and do not promote public safety. These police contacts disparately target minorities and find their roots in implicit

biases about people of color.

No more hunting by police for “criminals” that haven’t committed an obvious crime. No more “consensual encounters” with random black or Latino males on the street to gather gang intelligence. No more stop and frisk. Less laws, less probable cause.

Isn’t this the moment to reevaluate whom we hire and train as police officers?

Police departments are more likely to hire aggressive, confrontational people rather than compassionate, peaceful types. This practice of hiring the combative instead of the kind manifests in hostilities and distrust on the streets between police and the public, particularly people of color. Police contacts become stages for battle. A community member’s tension, nervousness or anger triggers an already testy officer. Explosions, literal and figurative, ensue.

We need a concerted shift in whom we employ to serve and protect. We need a return to police as peace officers, not law enforcement officers. We must demand that police act as guardians, peacekeepers and protectors for the communities they serve.

We should emphasize qualities such as compassion, empathy and sensitivity in our hiring of police. We should recruit the cerebral, detail-oriented, calm, rational, and composed to be our police officers.

We don’t need warriors with guns walking our streets. We need protective problem solvers. Isn’t this the moment to finally change the way we do things? Instead, as I write this, our police state grows and perpetuates with the imposition of citywide curfews.

Sajid A. Khan is a deputy public defender in Santa Clara County and one half of the Aider and Abettor podcast.

24 thoughts on “Guest Commentary: Why Do We Police Protests against Police Violence?”