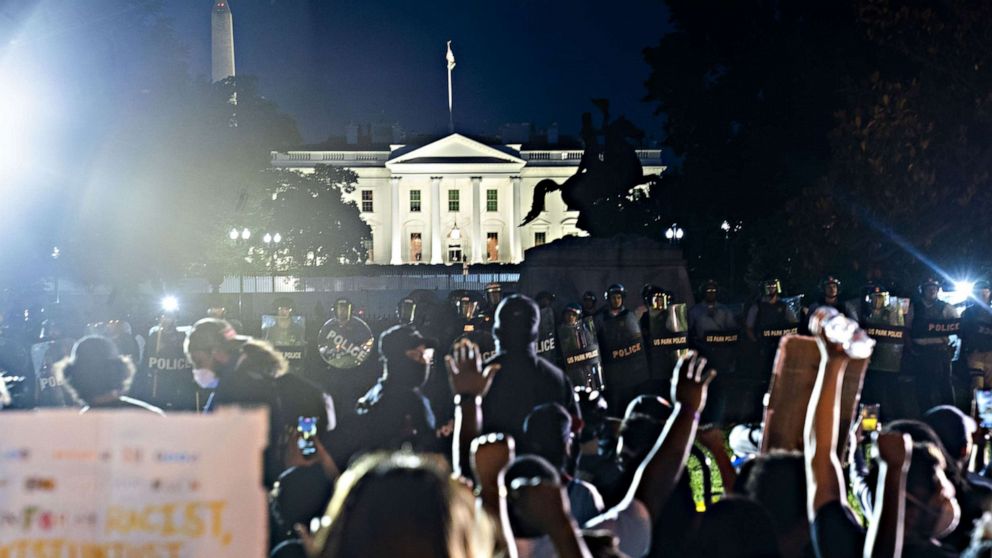 If there was hope that calmer heads would prevail on Sunday, that hope was shattered—literally—by another night of chaos in what is rapidly becoming the most serious threat to civil government in the history of our nation.

In Washington, DC, reports of violence outside the White House and reports that the President has been bunkered down has led to some to quip that the President, who refuses to wear a mask and show fear of coronavirus, is hiding from the civil unrest.

Former CBS news anchor Dan Rather tweeted, “I can imagine no other president in my lifetime failing to address the nation in a prime time speech during a crisis such as this. On the other hand, I cannot imagine another president whose words would be less welcome by so many of his fellow citizens.”

As the Washington Post reported: “President Trump stayed safely ensconced inside and had nothing to say, besides tweeting fuel on the fire.”  They added, “Never in the 1,227 days of Trump’s presidency has the nation seemed to cry out for leadership as it did Sunday, yet Trump made no attempt to provide it.”

In Sacramento, government agencies will be closed on Monday.  The situation got so serious that Sacramento Bee editors pulled their reporters out of the downtown.

As veteran news reporter Sam Stanton tweeted: “I have never willingly left the scene of a news story because of personal peril in my 38 years in the business. But when my editor ordered me to leave tonight, I did it.”

Earlier he reported: “A banner night for your Sacbee correspondent. Tear gassed twice, then knocked down from behind by two young men running full speed who stole Paul Kitagaki Jr’s camera. Oh, and we

In Cleveland, it was reported that the Cleveland police shut down the media: “No media is allowed downtown unless they are inside their place of business. Period.”

While looting and violence has occurred on the part of the looters and some protesters, the actions of the police themselves have caused heads to turn.  Reporters attempting to cover the events are being attacked by protesters and arrested by police.

A CNN reporter was arrested in Minneapolis last week on national TV, two photographers were arrested in Las Vegas, and in Louisville an officer fired pepper balls at a reporter for a local news station.

The incident was broadcast live on the air. “Who are they aiming that at?” the anchor asked. “At us,” the reporter replied.

They note in Salt Lake City, that “officers in riot gear shoved a man with a cane to the ground.”

In Atlanta, police officers stopped two college students in a car, and fired Tasers at them, before dragging them out of their vehicles.  That incident has been shown on national TV.

Increasingly the President is being criticized for his silence during this crisis.  With protests outside of the White House: “Nervous for his safety, Secret Service agents abruptly rushed the president to the underground bunker used in the past during terrorist attacks,” according to a report in the NY Times.

The media is focusing on the fact that his initial empathy expressed for George Floyd has been “overshadowed by his combative threats to ramp up violence against looters and rioters.”

The President was out of sight on Sunday, even as many recommended he deliver a prime time national address before another night of violence.

The Hill noted that “allies have urged Trump to address the nation, as his predecessors did during previous eruptions of racial tension, protests about discriminatory policing and national crises.”

The major news from the White House: “Trump tweeted he would designate antifa a terrorist organization, a remark seen by many as inflammatory and divisive in the context of the president’s past sensitivities about white nationalists.”

Meantime, the President tweeted, “Law & Order in Philadelphia, NOW! They are looting stores. Call in our great National Guard like they FINALLY did (thank you President Trump) last night in Minneapolis. Is this what voters want with Sleepy Joe? All Dems!”

He tweeted a follow up: “Get tough Democrat Mayors and Governors. These people are ANARCHISTS. Call in our National Guard NOW. The World is watching and laughing at you and Sleepy Joe. Is this what America wants? NO!!!”

For his part Biden took to Medium.

He wrote: “Protesting such brutality is right and necessary. It’s an utterly American response.

“But burning down communities and needless destruction is not. Violence that endangers lives is not. Violence that guts and shutters businesses that serve the community is not,” he continued.  “The act of protesting should never be allowed to overshadow the reason we protest. It should not drive people away from the just cause that protest is meant to advance.”

The former Vice President said, “I know that a grief that dark and deep may at times feel too heavy to bear.”  And he added, “I also know that the only way to bear it is to turn all that anguish to purpose. So tonight, I ask all of America to join me — not in denying our pain or covering it over — but using it to compel our nation across this turbulent threshold into the next phase of progress, inclusion, and opportunity for our great democracy.”

121 thoughts on “Monday Morning Thoughts: Things Got Worse on Sunday Night – Much Worse”