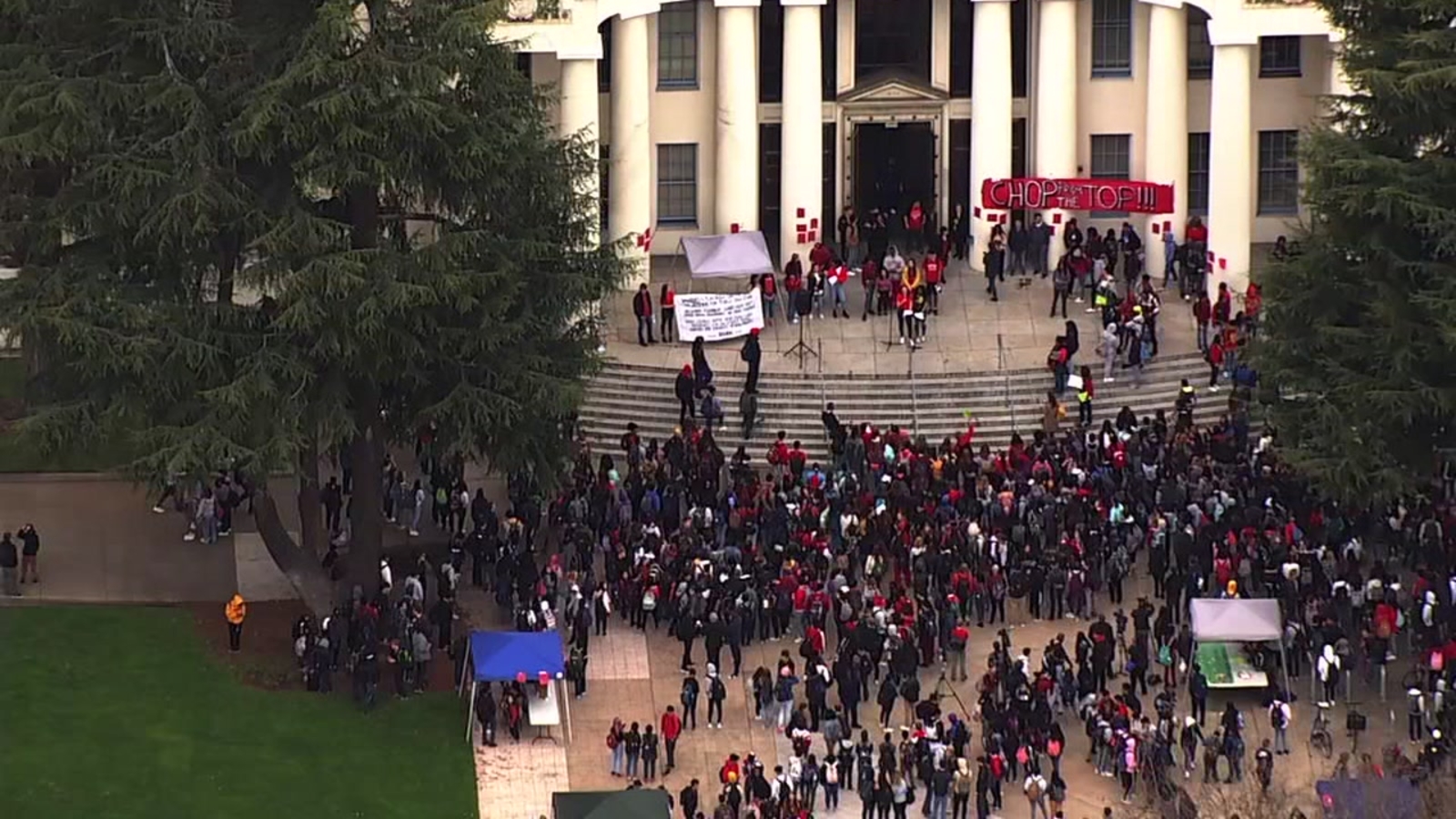 OAKLAND – The fight for racial justice continued here this week as thousands took their demands and activism peacefully to the streets.

An estimated 15,000 people gathered in front of Oakland Technical High School on Monday, June 1,  to join the nationwide protests in response to the recent killing of George Floyd, an unarmed Black man, by Minneapolis police.

The rally, organized and led by students and youth activists, began with passionate speeches and spoken word pieces calling for the end of a long history of police brutality, white supremacy, and deep-seated institutional racism.

The speakers demanded justice, equality, police accountability, and a radical shift in the treatment of Black people in America, strongly encouraging protesters to continue their activism and advocacy by bringing their voices to the polling booth and by supporting Black businesses.

One speaker stated that white allies “better have black receipts in their pockets.”

Community members paid tribute to the long list of those we have lost at the hands of white supremacists and violent police, including Oscar Grant, Trayvon Martin, Eric Garner, Michael Brown, Stephon Clark, Breonna Taylor, and Tony McDade, to name a few.

People of all ages, races, and genders flooded Broadway, chanting in unison in the streets. Protesters held up signs with well-known Black Lives Matter messages such as “No Justice. No Peace,” “Defund the police,” “Silence is violence,” and “We have nothing to lose but our chains.”

“We’re here for George Floyd, we’re here to show love to him and his family and to everybody. But we’re also here to disrupt and say we’re not going to let this slide no more,” said one of the student

organizers of the rally.

The crowd marched past boarded-up stores and restaurants, as well as graffiti and broken glass—traces of the protests that took place last Friday, May 29—on their two-mile walk toward Oakland City Hall, located in Frank H. Ogawa Plaza. Some later continued on to the Oakland Police headquarters.

Although the streets were packed, rendering it difficult to stay six feet away from one another, almost everyone in the crowd sported a mask.

Those standing on the sidelines of the protest handed out free water bottles, snacks, posters, sunscreen, and personal protective equipment including masks, gloves, and hand sanitizer. Other passersby from local stores, restaurants, apartment buildings, churches, and staff from the Kaiser Permanente hospital recorded the march on their phones, thanked and chanted along with protesters, and held their fists in the air.

Shortly after the peaceful demonstration began, Alameda County, which encompasses Oakland, sent out a mass emergency alert notifying residents of a curfew issued for 8 p.m. that night.

Although many headed home before the 8 p.m. curfew, those who remained were met by a line of police officers in riot gear who deployed tear gas to disperse the crowd, reportedly before the curfew was in effect. Despite the demonstration’s non-violent nature, protesters were still met with severe police actions, including the chemical agents.

Many speakers brought attention to the disheartening reality that most peaceful demonstrations, such as this one, rarely receive as much media attention and publicity as the smaller incidents of violence and looting.

As one speaker shouted to the crowd: “They want to show pictures of rioting and things burning down, but they will never show this.”

The diverse group expressed how sick and tired they are of fighting for the same issues year after year, generation after generation.

However, the leadership of Oakland Tech and Oakland School of the Arts, as well as their students and recent graduates, exposed the power of the youth, and the support and camaraderie of the protesters provided a strong sense of community and hope.