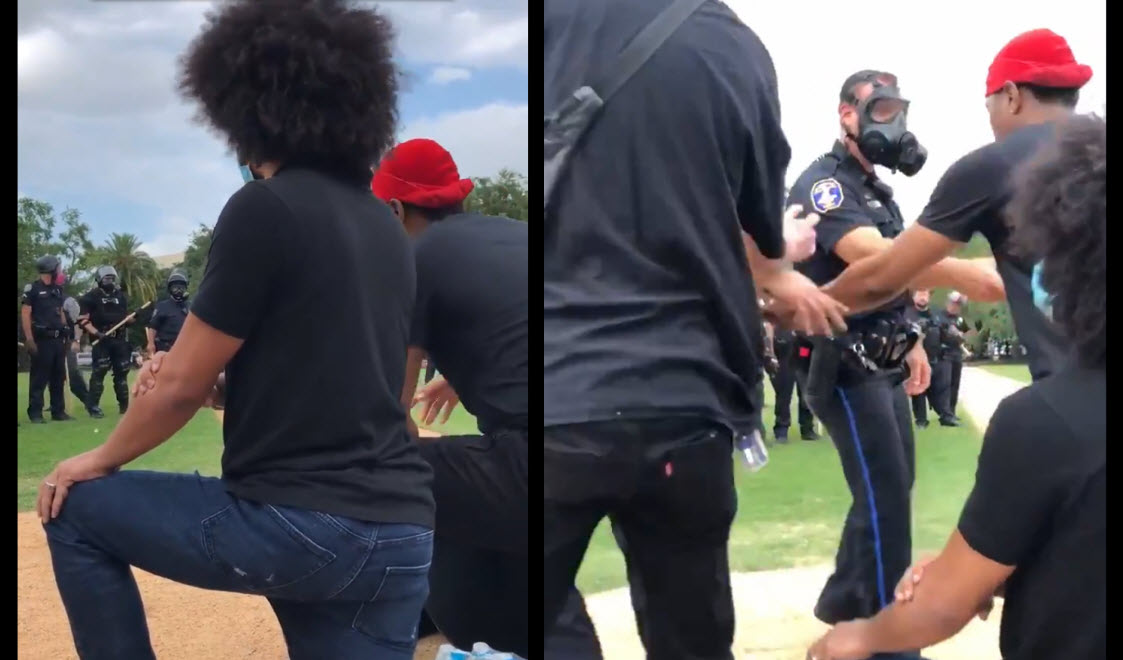 CHARLESTON, SOUTH CAROLINA – In Marion Square, a peaceful protester who knelt at a distance before a large, armed group of police officers delivered a message of “love” about respect for one another and unity.

And then he was arrested.

The man, 23-year-old Gee Jordan, expressed his appreciation and sympathy during the protest against police violence and for racial justice. Jordan was kneeling feet away from the armed and shielded group of police.

Video footage shared to Twitter captures the speech and the arrest.

…so they arrest him

While protesters surrounding Jordan reached a hand out to him in support, police idly stand by.

“We’re all scared,” Jordan continued. “Black or white doesn’t matter; we are all scared. We are living in fear. We gotta stop living in fear. I am not your enemy; you are not my enemy. We have to share this land no matter what. I am here for you. I am here with you. I love all of y’all. I don’t care if you’re dark skinned; I don’t care if you’re light skinned. You are my family and I love you and I respect you and I want to understand y’all.”

More protesters with signs knelt to support Jordan as he delivered the emotional message.

He continues, “I would love to see the best side of everybody here. Then, you can change your whole perspective of how you view someone. Because of their sides and how you see them in different light. Someone might have a bad day; you say they’re a bad person. No, no, no. We all got bad days. We gotta stop judging people only on our bad days because we all have them to some degree.”

The video shows the officers looking at one another while Jordan continues.

Then, the recording shows four officers approach Jordan. One of the officers can be heard saying, “He’s been here illegally.” They grab Jordan off his knees, despite the other protesters’ dismay and demands as to why he was taken away.

According to the sheriff’s office, Jordan was charged with disobeying a lawful order. He was released on June 2, 2020. The video footage of his speech and arrest received nearly 30 million views on Twitter.

Frank Knaack, the author of this letter and the executive director of the ACLU of South Carolina, noted that the COVID-19 pandemic makes arrests particularly concerning as many jails and detention centers nationwide are looking to reduce the number of people going into the jail system to reduce the risk of infection in close, confined spaces to the arrested, the officers, and the community.

The ACLU asked the sheriffs and police chiefs to respond to a series of questions, calling for reflection on the actions of the officers and police procedure in general. In addition, they ask the police departments to publicly apologize for the violent escalation that the officers took against peaceful protesters and commit to de-escalation as a response to future protests.