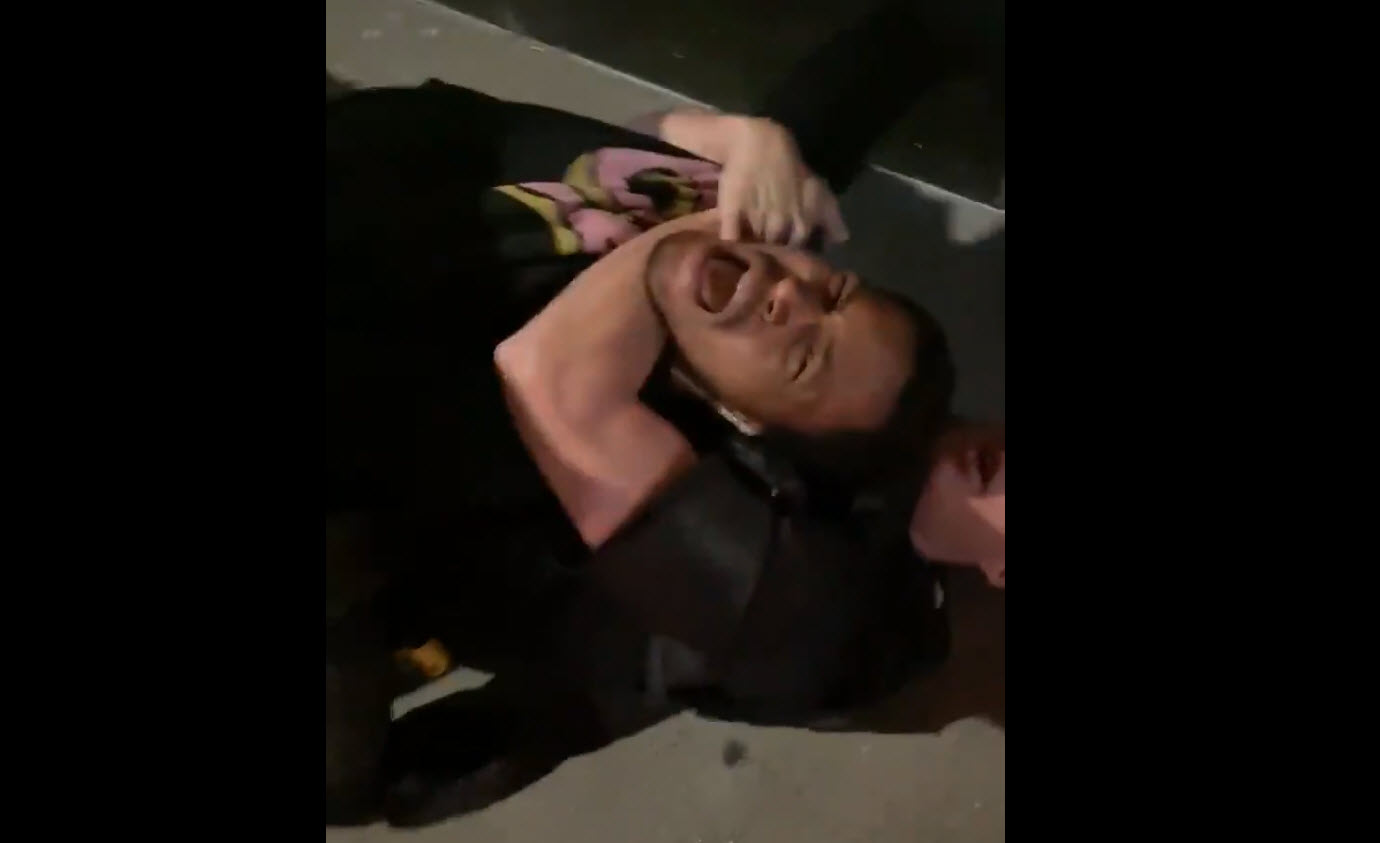 The young man was later identified by Sacramento police as 18-year-old Tyzhon Johnson. He was arrested on suspicion of looting and of resisting arrest by police officers.

In the video, an officer is shown lying on his back on a sidewalk with his arm firmly wrapped around the man’s neck. The man tries to pull the arm off his neck and at one point starts hitting the wall of the AT&T store next to them.

As multiple bystanders try to intervene, officers push them off the sidewalk with their batons, repeatedly yelling, “Move!” One of the officers has a rifle slung on his back and another begins pointing his at the crowd.

“Tell him to stop! You’re choking him!” yells the woman taking the video, Zakiyah Guillory.

The officer keeps the man in a choke hold as the sound of police sirens and screaming drown out the video.

2️⃣1️⃣5️⃣ Sacramento, CA: how many SPD cops does it take to choke out one black man? I'm counting 2-3

“You want to kill him! For what?” shouts another woman.

According to Guillory, she was driving home from a peaceful protest that night when she saw a young man, carrying two duffel bags, running from the police. He tripped on the sidewalk and an officer jumped on him, putting him in the choke hold.

After Guillory started recording the situation, an officer pushed her into the street.

“You f—ing pushed a girl for no f—-ing reason! Why the f—- did you push me to the ground?” she screamed as she got into a car with others.

Guillory mentioned that she saw groups of white teenagers stealing items that night and wondered why the police didn’t pursue them as forcefully as they did Johnson.

“I couldn’t sit there and be silent, especially after peacefully protesting about George Floyd, a man who was killed by being choked,” Guillory said. “This is the reason we’re out there, and they go and do the same exact thing?”

The Sacramento Police Department permits officers to use the carotid restraint control hold, which is performed by applying pressure to the sides of the neck with an arm. The hold can block blood flow, causing someone to become unconscious.

“The video captures the end of an incident where officers were attempting to effect an arrest for looting,” said Officer Karl Chan. “Prior to this, the suspect had fled on foot and officers engaged in a foot pursuit, The suspect then began to fight with the officers. The use of force has been documented and will be reviewed per department policy as with any use of force.”

Neck restraints have come under great scrutiny following the death of Floyd, who was killed by a white Minneapolis police officer after he pressed his knee into Floyd’s neck for over eight minutes. “I can’t breathe” were the final words of both Floyd and Eric Garner, another black man killed by police, and the phrase has become a rallying cry against police brutality.

More footage from Sacramento captures police officers opening fire on peaceful protestors. The video is from an Instagram livestream posted on Twitter with over 161k views.

In the video, protestors chant, “Take a knee!” at the officers lined up in front of them. Several appear to begin to kneel as the crowd cheers loudly. Seconds later, the sound of shooting blares and multiple protestors begin to flee the scene.

Smoke can be seen spreading and multiple rubber bullets shoot through the air into the crowd.

“How was that even necessary?” writes one user in the comments. Another person mentioned that Sacramento didn’t even have a curfew during the time of the incident.