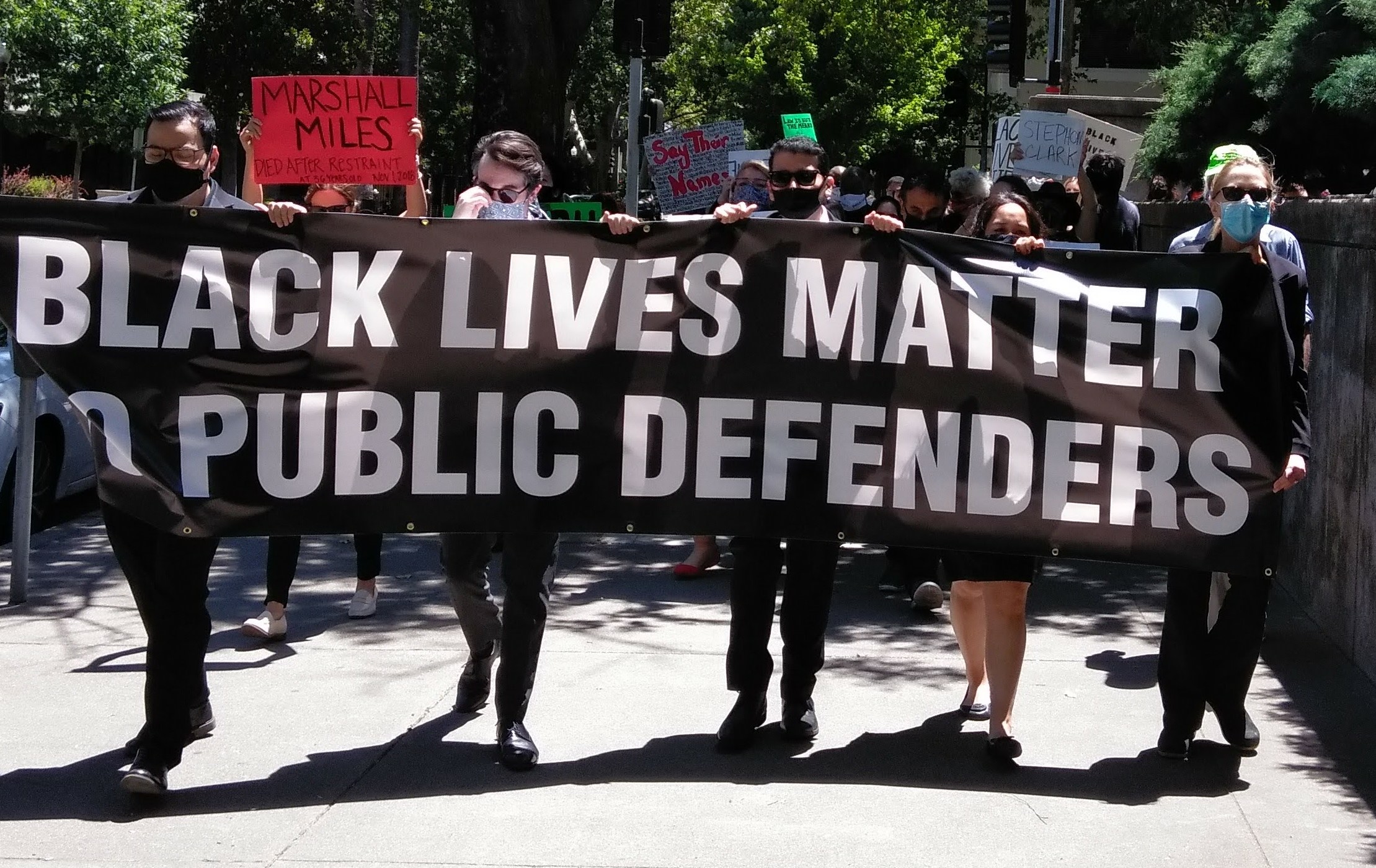 SACRAMENTO – In a dramatic and unprecedented move, the Sacramento County Public Defender’s Office Monday held a demonstration against police violence and unequal treatment of people of color in the court system, joining about 70 other public defender’s offices across the country.

An estimated 125 county public defenders, federal defenders and other private defense counsel joined the downtown superior courthouse rally to “speak out against a system that has failed to hold police accountable for violence against our communities and to call for racial and economic justice for our clients and the communities we serve. We do this for racial and economic justice. We do this because Black Lives Matter,” said the defenders in a statement.

After marching around the courthouse – most of the lawyers were carrying signs and dressed in black – the legal equivalent of a Black Lives Matter protest held an eight minute, 46 second die-in on courthouse property to mark the time that a Minneapolis police officer held his knee on the neck of George Floyd before it killed Floyd.

The public defenders didn’t mince words about a court system they believe is unfair to people of color.

Sacramento doesn’t “need an increase in policing but an investment on communities forgotten,” said Quoc To, a public defender, adding “we need real racial and economic justice for our under-served communities.”

“We are on the brink of meaningful change, the wind is at our backs,” said Amanda Benson, the PD chief assistant. “We cannot squander that.” Benson noted that “implicit” racial bias exists, even among public defenders.

“How many of us believe Black girls are tougher,” and “How many do we discourage from going to trial or being a witness because of our bias?” she asked of the defenders, noting that now “is never a better time” to change.

And Supervising PD Mark Slaughter, a Black defender, acknowledged that he wakes up mornings now “wiping away the tears…and Black men don’t cry.”

He talked about his early days as a lawyer, “wearing the best suit that my parents bought me” and walking into court. The judge told his white colleagues to “have your client (Slaughter) stand behind the bar,” treating him automatically as a Black man, as a defendant.

He said he tried to “make myself smaller, spoke in a higher voice…I did not want to be authentic until I was told by another attorney to do so…thank you Linda Parisi,” nodding to the law school prof

“We need to develop relationships with the communities we serve. We are already engaged, we can’t stand still,” he said.

Public defender Jessie Morris echoed that, reminding the defenders that “the rich make bail and the poor stay in jail” in his attack on the court system.

Defendants who are persons of color “don’t get an impartial judge, they get a prosecutor,” Morris said, acknowledging that judges – most are former prosecutors – pretty much do what the District Attorney asks them to do.

And, PD Allison Williams continued the attack on the system, noting, “We are defenders of justice. We have a responsibility to tell our clients to file complaints and report how they are treated. We are becoming contenders not just defenders. It’s time to rise up,” as she challenged the public defenders in the crowd.

“The tide has turned. It’s time to use our platform to rise up against racist institutions. Now we can get to the core of the problem (and) the rot in the system,” Williams said.