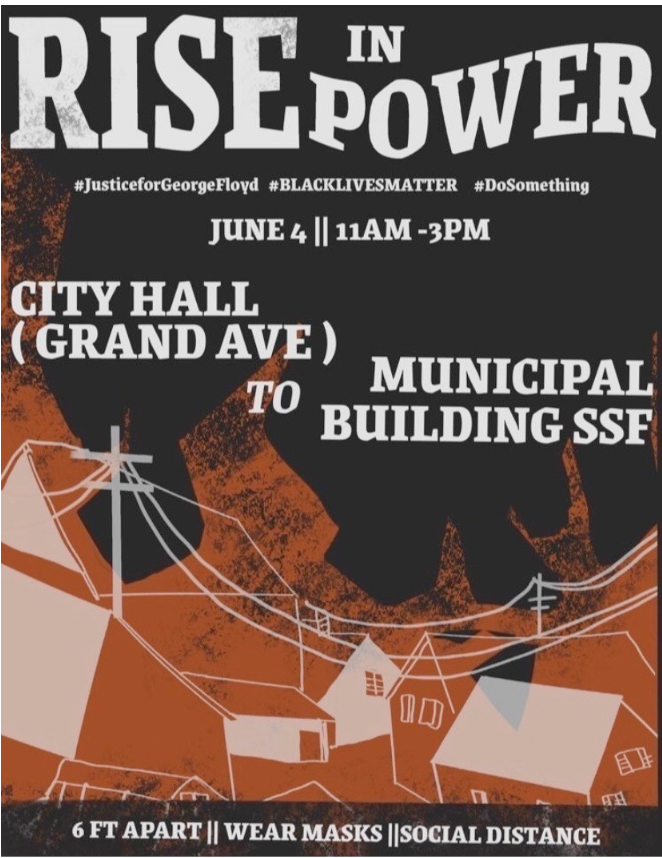 George Floyd’s death has sparked nationwide protests against the issue of police brutality in the U.S., bringing the Black Lives Matter movement to the forefront.

In addition to the protests held in San Francisco, an unknown group organized a peaceful demonstration in support of George Floyd, called “Rise in Power.”

The organization asks protestors to refrain from looting, but also urges local business owners to remove any outdoor furniture and to board windows.

“We fully support peaceful protesting and those that wish to express their voices and feelings in a peaceful and lawful manner,” read the organization’s post. “However, we will not tolerate violence, property destruction, and criminal behavior in South San Francisco. Those that violate the law will be sought out and held accountable for their actions through the criminal justice system.”

Many have taken to the streets of major cities to protest police brutality, ranging from peaceful demonstrations to some looting of stores. Walls of corner shops and freeways spell out “Black Lives Matter” and “Say His Name,” while shattered glass covers the sidewalks.

Smaller cities in the Bay Area have also voiced their support out on the streets, such as those in San Mateo County.

“The county takes our residents’ civil liberties extremely seriously, and we want to protect their right to peacefully demonstrate over the heartbreaking and preventable death of George Floyd and other

violent acts in our nation,” said County Manager Mike Callagy in a statement.

“However, we also take their safety seriously, and this order is a tool to help prevent looting and civil unrest by those who would take advantage of this highly emotional and tragic period of time,” he added.

Amid the conversations of police brutality, one local nail technician shared a recent experience of being swatted by police officers at the Target parking lot in San Bruno.

The woman, Vanessa Ortega, recounts being followed by a police car into the parking garage on Tuesday, where she then stopped to pull over. Moments later, 10 cars from Bay Area Rapid Transit (BART) and the San Bruno Police Department circled her vehicle, with officers pointing guns at her.

Ortega was handcuffed and thrown into the police car after being accused of armed robbery. The officers told her she matched the identification of a “Hispanic female in a black Ford with tinted windows,” though that was the only information they had.

“I am traumatized and feel so violated in so many ways,” said Ortega in a Facebook post. “If you know me you know since I was in high school I always looked up to the police and wanted to join the force so badly. I’ve had amazing experience with officers from the sheriffs’ department and SMPD [San Mateo Police Department] but today I am disgusted at the amount of power these officers have to abuse the use of force.”

Many offered their support to Ortega and shared similar encounters with the local police department. One commenter suggested that Ortega retrieve video footage of the incident from the officer’s body cams to file a report.