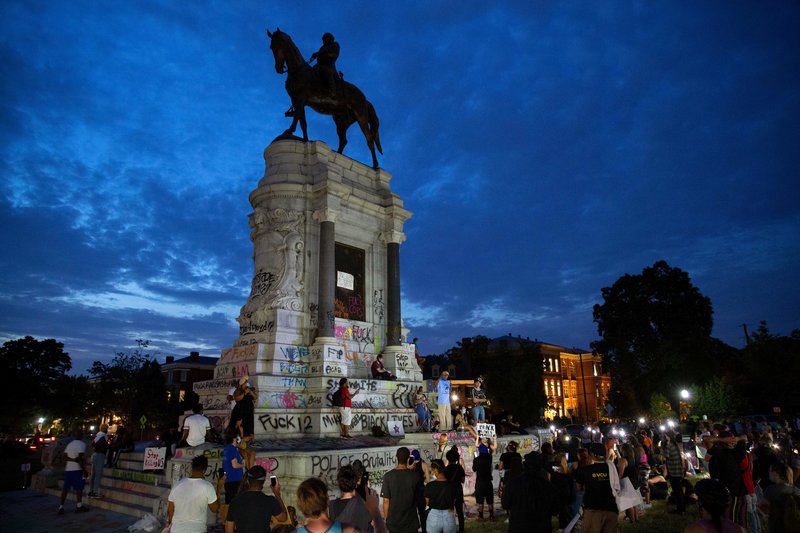 Even before I read the column by Caroline Randall Williams in the NY Times yesterday, I was sold on the need to tear all of the confederate statues down—or at least put them in museums where they become history rather than monuments.

Read the column, it’s short.  My excerpts will not do this justice.  Williams writes, “I have rape-colored skin. My light-brown-blackness is a living testament to the rules, the practices, the causes of the Old South.”

She says, “If there are those who want to remember the legacy of the Confederacy, if they want monuments, well, then, my body is a monument. My skin is a monument.”

She adds, “I am a black, Southern woman, and of my immediate white male ancestors, all of them were rapists. My very existence is a relic of slavery and Jim Crow.”

I increasingly believe that until this country owns up to what it has done in the past—slavery, Jim Crow—it can not address the relics and institutionalized vestiges of those into the future—mass poverty, income inequality, concentrated pockets of crime and mass incarceration.

How do we acknowledge our errors and sins of the past if we continue to honor their legacy?

Earlier this week the New York Times had a very interesting article that started out chronicling the story of Greg Reese.  He is a white, stay-at-home father who lives in Campton, Kentucky.

Recently he peeled off the Confederate flag magnet he had placed on the trunk of his car six years ago.  He did not put it back on.

Writes the Times: “It was a small act for which he expected no accolades. It should not have taken the police killing of George Floyd, Mr. Reese knew, to face what he had long known to be true, that the flag he had grown up thinking of as ‘a beautiful trophy’ was ‘a symbol of hate, and it’s obviously wrong to glorify it.’”

The Times continues: “The sustained outcry over Mr. Floyd’s death has compelled many white Americans to acknowledge the anti-black racism that is prevalent in the United States — and to perhaps even examine their own culpability for it. It is as though the ability of white people to collectively ignore the everyday experience of black people has been short-circuited, at least for now.”

There will be calls in this country that we are erasing or canceling history.  That this is not the way to address systemic racism.  That mobs should not be the ones authorized to oversee justice.

I am sympathetic to the issue of mob rule but also understand that people’s patience has worn thin, that they are tired of waiting for public officials to act.  To me the issue is whether to remove the statues, while the means by how to do that is in most ways a red herring for me.

Removing statues of people like Robert E. Lee should not be a close call as these things go.

In my view we have whitewashed history.  In my view, slavery should be viewed on par with the Jewish holocaust.  I say that as a Jew.  We destroyed generations of Black people who were condemned to live life worse than we treat cattle.  That we didn’t systematically kill them should not absolve us of the magnitude of this atrocity.

This is not long ago either.  My grandmother was born in 1915.  When she was child, she would have lived among former slaves and former slave owners.  The legacy of slavery actually extended well beyond the Emancipation Proclamation.

As Douglas Blackmon captured in his brilliant book, Slavery by Another Name, loopholes in the 13th Amendment allowed for the re-enslavement of thousands of Blacks who were “leased” through forced labor camps operated by state and federal governments.  This was done with violations of the law as benign as failure to repay $5 worth of loans.

But slavery itself needs a discussion here apparently.  For just under 250 years, from 1619 to 1865, millions of Blacks were kidnapped, taken across the ocean in conditions described in many accounts as simply beyond appalling, and enslaved for the rest of their lives.

We are talking about brutal conditions.  I recently re-read Fredrick Douglass’ account of slavery, which he has called “the enemy of both the slave and the slaveholder.”

What emerges in his and other words is a picture of absolute subjugation—hard labor from dawn to dusk, every day, few breaks, chains, whippings, killings, rapes, torture, brutality … day after day, year after year, life after life, generation after generation for 250 years.

Now when we add in monuments to the Civil War’s Confederate heroes, we are also honoring acts of treason against American.  That’s right.  Robert E. Lee not only fought for the right of southern states to have slaves—bad enough—he committed treason.  Millions of people died because of this treason.

But there is a third point that weighs against the Confederate statues.  Their purpose.  These were not for the most part enacted in 1865 or even in the 1870s.

While groups ranging from President Trump to the Sons of Confederate Veterans defend the monuments as an important part of history, they rather date to two periods of time—the early 1900s and again in the 1950s and 60s.

A comprehensive study of Confederate statues and monuments across the country published by the Southern Poverty Law Center in 2016 bears that out, and the statues were enacted in response to two periods of extreme racism in the south.  During the 1910s, for example, we saw the renewed rise of the KKK and many brutal massacres of Blacks that culminated in 1921 in the massive race riot that destroyed a thriving Black Community in Tulsa, Oklahoma.

The 1950s and 1960s saw the erection of these monuments in the face of the civil rights movement and yet another rise of the KKK and White Citizen Council (the white collar version of the Klan).

“Most of the people who were involved in erecting the monuments were not necessarily erecting a monument to the past,” said Jane Dailey, an associate professor of history at the University of Chicago. “But were rather, erecting them toward a white supremacist future.”

This is the history that people defending statues and monuments are protecting.  How do we live down the legacy of racism and the atrocities of slavery when we are still honoring their vestiges in parts of this country?

The Confederate flag continues to fly in much of the south, it is enshrined as the state flag of Mississippi and, yet, this is no benign history.  This is akin to flying the Nazi Flag in Nuremberg, Germany.  The sooner we recognize this, the faster we can achieve real and true reconciliation.

Share:
Tags:Sacramento Court WatchSacramento Public Defender
Previous : Guest Commentary: Why Prosecutors Keep Letting Police Get Away with Murder
Next : Sunday Commentary: It Really Is About Masks

31 thoughts on “Sunday Commentary: America, Tear Those Statues Down”