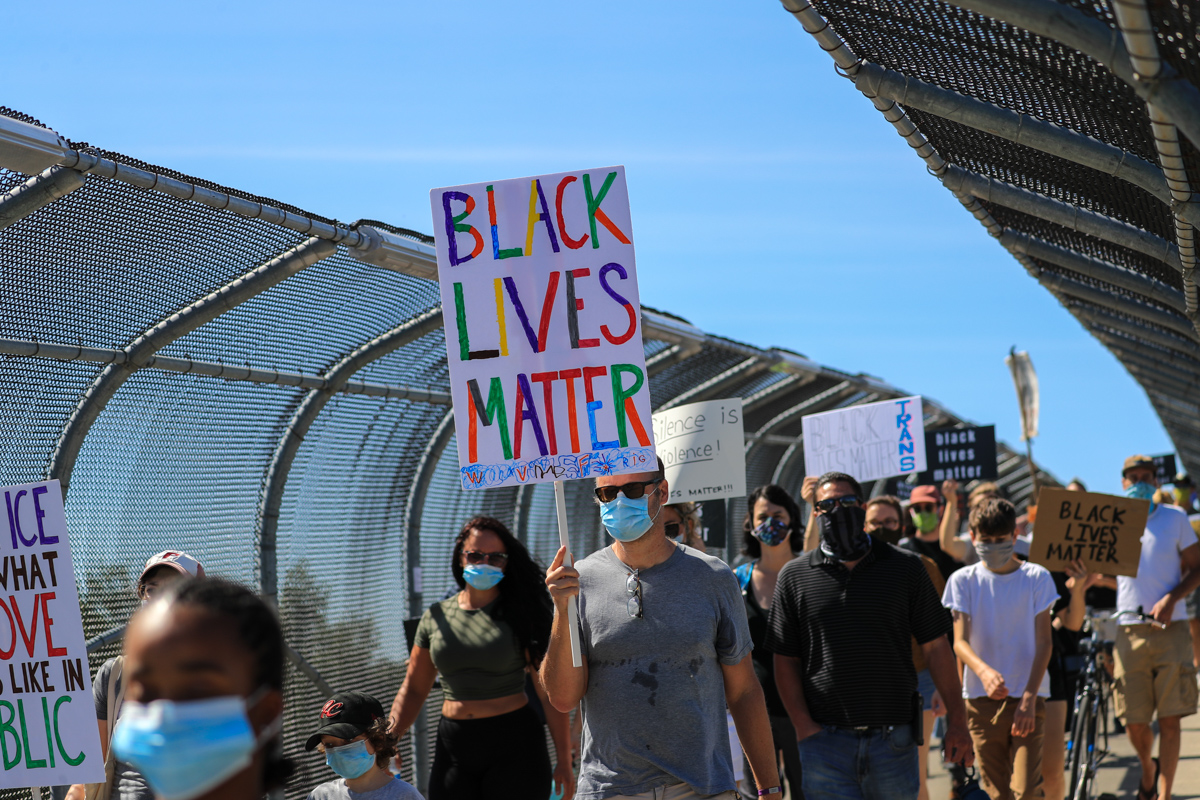 All week commenters on the Vanguard have been pressing me to acknowledge that protests during the time of COVID are inadvisable and against the advice of science.

I get the point they are making.  The advice we are getting from public health officials are to avoid large gatherings, to socially distance—and for that last part, wear a mask.

The protests definitely present a dilemma because, on the one hand they have clearly driven social change in a way we really haven’t seen in decades.  On the other hand, we are facing what is now an unprecedented public health crisis, perhaps going back a century.  So how do we weigh the two?

It turns out that data is probably the soundest approach and the remarkable evidence emerging may point the way toward being able to have a relatively open economy while addressing the COVID-19 outbreak—wear a mask.

In yet another story in NPR this week, they once again found that the cause of the new spike in cases is not protests but parties.

“We did have a rally in Bellingham, which is our county seat, and there was also a protest, and we have not been able to connect a single case to that rally or to the protest, and what we’re

finding is in large part that’s due to the use of masks,” Erika Lautenbach, the director of the Whatcom County Health Department in Washington State, tells NPR’s All Things Considered.

She continued: “Almost everyone at the rally was wearing a mask, and it’s really a testament to how effective masks are in preventing the spread of this disease.”

This is why contact tracing is so important even if it is intrusive, because it allows us to, as they discovered in Washington, see that a large number of the cases are due to large parties where people weren’t wearing masks.

Since the beginning of June I have covered six protest-type events.  My observation has been that, at all of them, 95-percent plus of the people there were wearing masks.  In fact, at the march last Sunday, there were 750 to 1000 people and the only people without masks were little kids who were holding them in their hands.

Distancing may not have been perfect, but at the rally in the park two weeks ago, the huge crowd was spread across Central Park with little pockets of families together and gaps to allow for distancing.

So why are social events spreading the disease but not the protests?

“We’re finding that the social events and gatherings, these parties where people aren’t wearing masks, are our primary source of infection,” Lautenbach says.

The secondary place for infection—workplace settings.

Lautenbach explained: “And then the secondary source of infection is workplace settings. There were 31 related employers just associated with that one party because of the number of people that brought that to their workplace. So for us, for a community our size, that’s a pretty massive spread.”

Deaths are a lagging indicator of disease spread.  Nevertheless, it would appear that the death rate for what is occurring in June will be lower.

That is because, in April, the big struggle was with long-term and elder-care facilities.  Now the people getting the virus tend to be younger.

“We have seen almost a near flip in the cases that we’re experiencing,” Lautenbach says. “So in April of this year, we were really struggling with long-term-care outbreaks. And so about 3 out of 4 people were over the age of 30 and really pretty heavily skewed to 60-plus. And by contrast, in June, we’re seeing that now 2 out of 3 people that have contracted this disease are under 29.”

I would be cautious about the death rate though—deaths present themselves at the end of the process and could be 6 to 8 weeks after infections.  What we have seen is a rise in both hospitalizations and ICUs, and it would be folly not to expect deaths to tick up.  But the change in demographics may mitigate against it going too high.  Still, the disease can be serious for the young and lead to permanent health disorders.

For those pushing for more opening of the economy, the key to doing that safely appears to be getting people to wear masks.  And that has proven very difficult.

There are those who believe we should fully open the economy, as this commenter advocated last week: “It is time to put and end to this madness and open the damn economy. The nation is not going to suffer like this while the political establishment plays politics with the livelihoods of millions.”

But I think Robb Davis hit the nail on the head: in actuality, the economy is for the most part open. What is holding it back is not government regulation but rather the fact that the people are voting with their feet.

Polling shows that only about one-third of the public feels the way of the cited commenter, about the same percentage currently supporting the president for re-election. Most believe that the economy was opened far too soon and are concerned about the resurgence of COVID-19.

To a large extent, people are voting with their feet right now.  COVID itself is what is preventing the economy from going full tilt.

One problem is trust in the economy and uncertainty about what the near term future will bring.  The second problem is concern about personal safety.  I will illustrate both problems with personal anecdotes.

When the economy shut down, there was a lot of concern on my part about the short-term ability of the Vanguard to pay the bills.  Under the best of circumstances, we have for most of our existence lived right on the edge of viability, sometimes living month to month or even week to week.

The goal set in March was to raise enough money to survive until September when we hoped things would be better.

We have largely met that initial goal and probably even exceeded it.  At this point, we are viable until the end of the year, which is of great comfort.  And, in fact, with the explosion of our coverage (in case you haven’t noticed we have gone from four to six articles a day to seven to 10), we could probably stand to hire more help.

If I knew we could continue to bring in funds like we have been, I would probably take the plunge.  But the uncertainty of the economy forces us to take a cautious approach.

On the other hand, a few weeks ago my thinking was about going away for a long weekend.  We were thinking about a trip to Humboldt with the kids.  But because of the resurgence of COVID, those plans are on hold.

Once again, instead of putting money into the economy, the concerns about COVID have led to a more cautious approach.

This is the problem—you have more people around town.  You have people working.  You have people coming to stores.  But they are in no way functioning at capacity.  A lot of that is because of concerns about the virus.

We are in this weird halfway point.  Businesses are open, people are having to put themselves at risk going to work, but the economy is really not functional.  There are just enough people going to large functions, spreading the virus, but not enough everyday activity to really restart the economy.

In a way it is the worst of both worlds.  But the bottom line is, until people have confidence that COVID is under control, the economy is going to sputter.  And so those worried about the economy need to address those concerns.  One way to do is to convince people to wear masks.  Masks work well in slowing the spread.

141 thoughts on “Sunday Commentary: It Really Is About Masks”