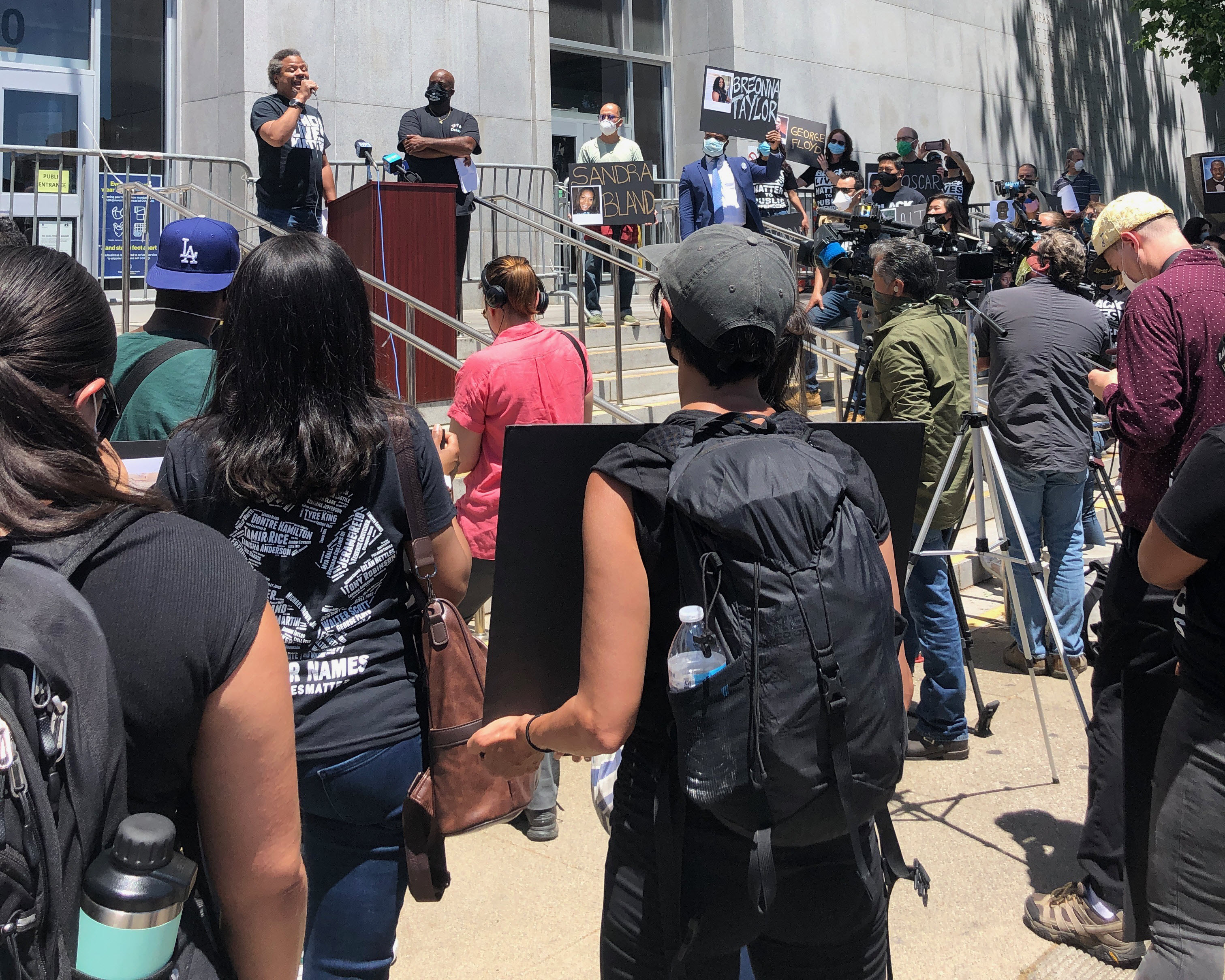 by Ruby Wilks and Henry Stiepleman

SAN FRANCISCO – “I know this is the next Civil Rights Movement,” said San Francisco Deputy Public Defender Jacque Wilson about the George Floyd protests erupting around the country. Monday, the San Francisco Public Defender’s Office joined more than 70 public defender offices around the U.S., holding a rally on the front steps of the Hall of Justice.

The demonstration, attended by 100 or so people and with more than 1,000 views on a Facebook live stream, included speeches by prominent defenders and community members, the surprise arrival of members from the Federal Public Defender’s Office, and eight minutes and forty-six seconds of kneeling in honor of George Floyd.

The crowd was comprised of people wearing masks and black t-shirts, many with “Black Lives Matter to Public Defenders” on the front and the names of those lost at the hands of police on the back.

Signs with the names of those Black Americans and their photos were handed out to the crowd as well. Speeches were delivered from a podium centered on the court steps. Police presence was minimal.

She continued with more specific demands for Mayor London Breed: “We call on our mayor to nominate police commissioners who are committed to change and to reform, and have a track record of that commitment. Not a prosecutor, not a political ally. We want reform, and we want police accountability.”

Solis’s last call was for “Governor Newsom (to) change the laws that allow for transparency and police accountability in hearings.” As of right now, it is incredibly difficult for defense counsel to get access to the past misconduct of police officers. 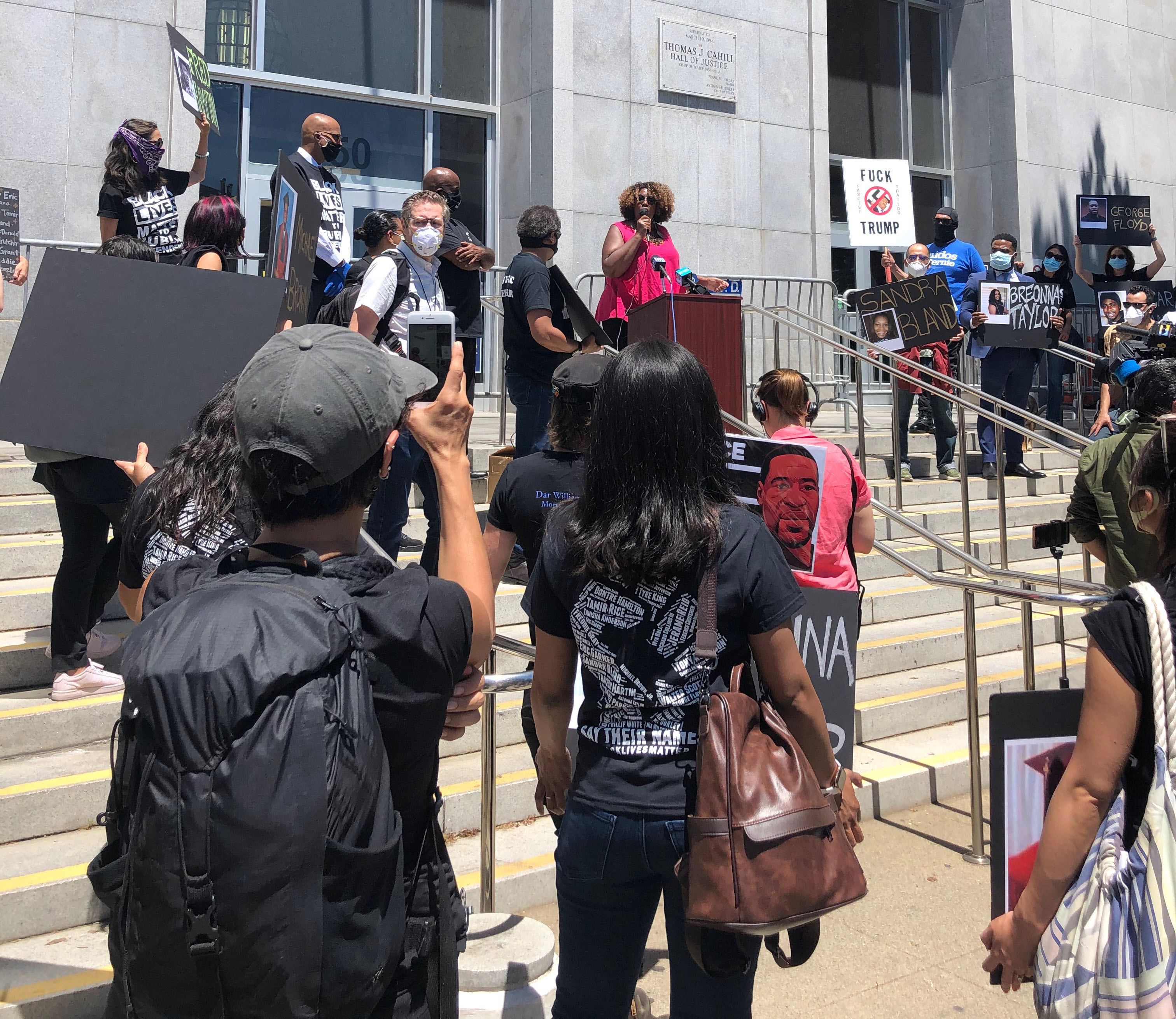 Solis finished with the following: “George Floyd’s murder ended a beautiful, Black life. But it also marked a new beginning. The beginning of a new America. We will no longer just march and then go gently into that good night.”

Phelicia Jones, founder of Wealth and Disparities in the Black Community and renowned San Francisco activist, spoke next. Jones gave her honors to her good friend and late Public Defender Jeff Adachi and his commitment to San Francisco’s black community.

During her speech, Jones cited a statistic often quoted in the SF Public Defender’s Office: Black people make up around just 6 percent of San Francisco’s population, but over 50 percent of its jail population.

“I love Black people…which is why I can’t do injustice to my people and not speak up,” shouted Jones to the cheering crowd before concluding with: “I am not a politician. I am an activist.”

During Jones’s speech, a man began passing out free waters and snacks and providing hand sanitizer to attendees at the protest. He was met with applause.

The man, Damien Posey, is an award-winning Bay Area mentor, known as Uncle Damien. Said Posey about the demonstration, “It’s beautiful, man. It’s solidarity… Whatever industry you’re in, like the window glass union [Posey gestured toward the Auto Glass Now shop across from the Hall of Justice] needs to do an approach (like this).”

Phoenix Streets spoke after Jones. As Streets got up to the podium, calls of “Bird” and “Birdman” came out from the crowd for the person with the most jury trials in the Public Defender’s Office—over 100.

During his speech, Streets focused on police unions, which he said “see it as their job to sow discord between police officers and the communities they are sworn to protect. That has to stop!”

Streets also spoke about many recent videos of police misconduct: “In this day of cellphone cameras, body-worn cameras, and surveillance footage–security footage… you can no longer turn a blind eye! The cops can no longer lie!” He added, “The sad truth is: No video, no justice.” At this point a man in the crowd yelled, “We still get no justice, even with the video.”

Also, during his speech, Streets turned to the recent killing of unarmed Sean Monterrosa at the hands of Vallejo Police. A vigil and march for Monterrosa will be on June 13 at 3 pm at the Vallejo City Hall.

Then came eight minutes and 46 seconds of kneeling, which, aside from the honking of passing cars in support, passed in silence. The time concluded with an impromptu second reading of Floyd’s final words by a kneeler. 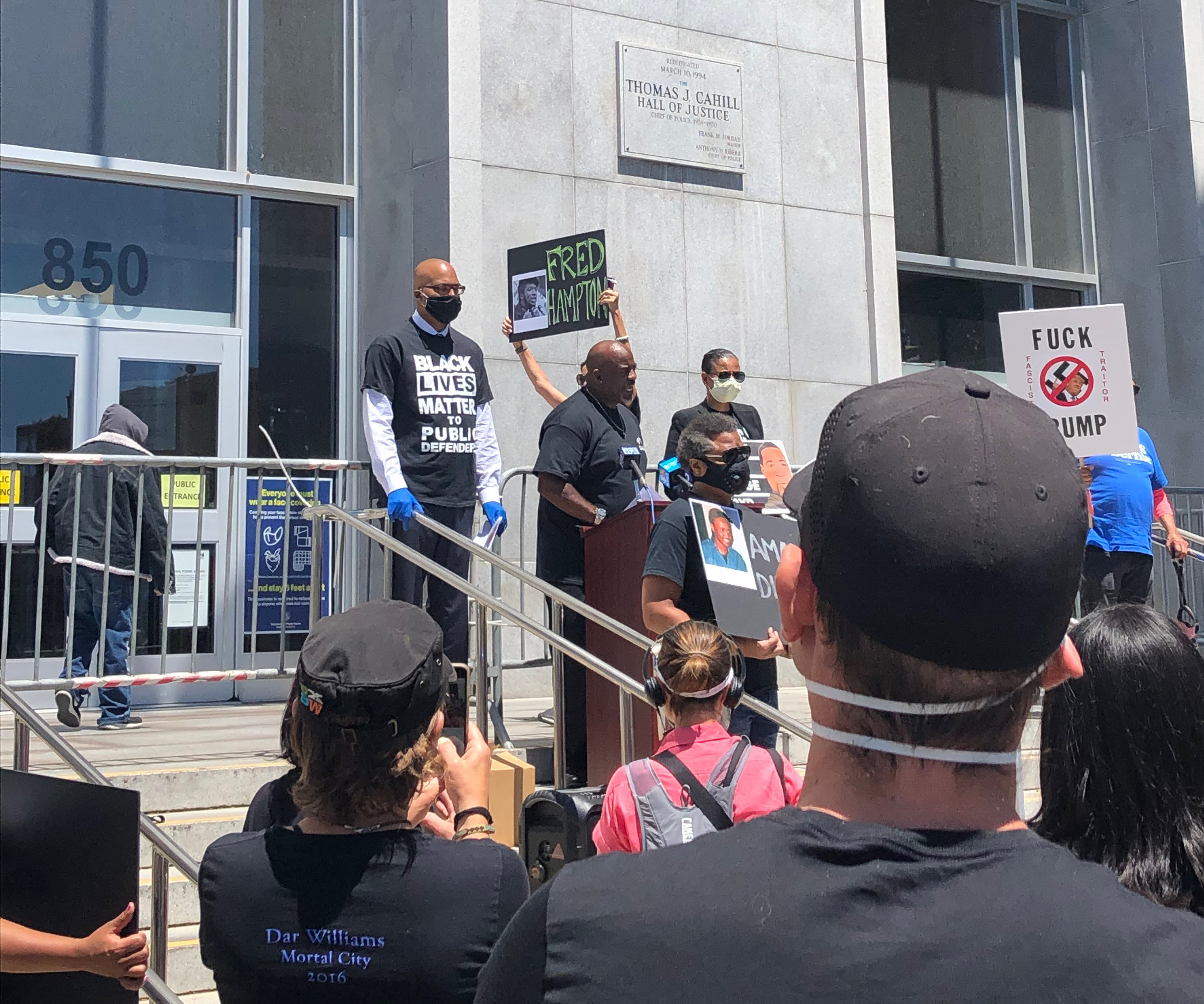 Mano Raju wrapped up the speakers.

Raju pledged to take a knee to honor the victims of police violence—not only today, but every Monday to come, and encouraged others to do the same.

His speech was momentarily interrupted by the arrival of the Federal Defender’s Office lawyers, marching down Bryant Street and chanting “Black Lives Matter.” The groups merged their chants, before Raju carried on.

In line with nationwide desires to radically alter law enforcement’s role in our society, Raju revealed that his email has been flooded in recent days with demands to defund the SF Police Department.

As both community activist Jones and Public Defender Raju explained to the crowd, the “Black Lives Matter movement is bigger than police brutality.”

Jones and Raju believe that the movement must address the pervasive racial injustice and inequality at every level of the criminal and legal systems. Both want sweeping changes on the structural level as well as on the interpersonal level.

Wilson went on to state that “public defenders are on the front lines, but we need to take a more active role in the fight against racial injustice… Our role is to show up, show out, and get justice—and to hold those in power accountable. Public defenders are often the first line of real defense.”

Solis summed up the moment well: “We marched after Rodney King. Nothing changed. We marched after Trayvon Martin. Nothing changed. Amadou Diallo, Tamir Rice, Eric Garner, Philando Castile, Mario Woods, Oscar Grant, Freddie Gray, Stephon Clark, Michael Brown, Botham Jean, Laquan McDonald, Akai Gurley, Atatiana Jefferson. They were all killed by police violence, but nothing changed. Today we are here for George Floyd and Breonna Taylor—killed by police. And we are here today for the many others that I named and those we never even heard about.”

But the public defenders—or “Freedom Fighters” as they sometimes call themselves—have not lost hope. “Now is different,” declared Solis. “We are not going away,” she continued. “We will not go gently into that good night.”