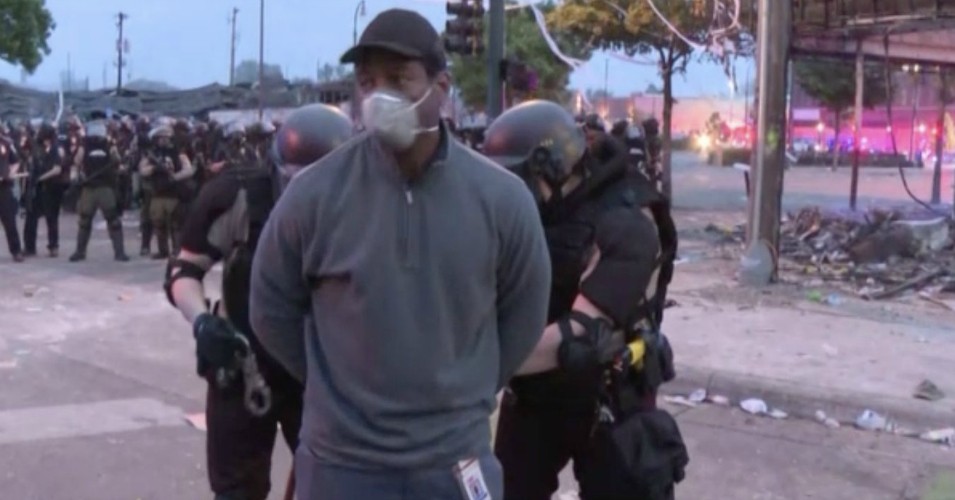 The Vanguard has located a collection of some 300 videos show police using excessive force, beating, or illegally arresting protesters, journalists and others during the George Floyd protests across the nation.

Of particular concern to some, journalists from different news outlets are falling victim to police brutality while covering these events.

Freedom of the press, as guaranteed under the First Amendment of the U.S. Constitution, allows journalists to report on events at these protests. Despite their constitutional protections, journalists are still being attacked and arrested by officers patrolling the protests and finding themselves in a great deal of danger while on the job at the scene.

The Committee to Protect Journalists outlined a safety advisory for those covering U.S. protests over police violence, which includes information on police targeting journalists with rubber bullets, projectiles and pepper spray, arrest and detention, threats from crowd, physical safety and digital safety.

On May 29, 2020, at 5:10AM CT, CNN reporter Omar Jimenez and his camera crew were arrested in Minneapolis while reporting a closure of a street in the city as a result of the riots. The arrest was aired live on CNN.

While Jimenez described the scene to the camera, one of the officers told him he was under arrest. Jimenez complied and asked the officer why he is being put under arrest. The officers did not answer him. One of the team members behind the camera continued to explain that the crew is reporting from CNN. Jimenez remained calm as he was arrested.

During his arrest, CNN news anchor Alisyn Camerota made an announcement to viewers who were just tuning in. One of the men behind the camera asked her to pause so that they could listen to what the police officers were saying. Jimenez was escorted away from the scene.

“That is an American television reporter, Omar Jimenez, being led away by police officers,” said one of the cameramen. “He clearly identified himself as a reporter. He was respectfully explaining to the state police that our CNN team was there and moving away as they would request, and then for some reason, he was just taken into police custody live on television.”

The producer was arrested next as the cameraman stated that he believed they would all be arrested. He asked again why they were being arrested.

The cameraman put his camera equipment on the ground as he was being arrested. The camera was still running live and broadcasting. An officer carried the camera away, unaware that it was still rolling.

The three crew members were arrested within five minutes of being approached by the state patrol, not knowing why they were being taken into custody at the moment. A news anchor from the broadcasting studio shortly later learned from the unarrested photo director that the crew was arrested for not moving when they were told to by police.

On the same day, another reporting crew was fired at on live television in Louisville, Kentucky. Video footage showed reporter Kaitlin Rust walking down the street with her camera crew, stating that they were behind the line.

The cameraman pans on an armed officer pointing a gun directly at them while Rust frantically yells that they are being shot at.

“I am getting shot!” she yelled.

Rust then realized that they were pepper bullets. The officer maintained aim at Rust and the cameraman and continued to shoot at them. The news anchors at the broadcasting studio asked Rust why they were being shot, to which she frantically said that she doesn’t know.

Again, on the same day in Denver, Colorado, a team reporting for ABC Denver7 News was attacked. The police aimed at reporter Adi Guajardo and a photographer with paintballs. The photographer got hit four times and the camera also got hit. Guajardo avoided getting struck.

Our photographer got hit four time and our camera got hit.

Freelance photojournalist Linda Tirado was shot in the left eye while covering the riot in Minneapolis.

“[What] we think happened is I took a rubber bullet to the face,” Tirado said on Twitter. “It exploded my eyeball, which has not been patched together but who knows if it’ll need more surgery. My vision is gone no matter what it winds up looking like scar wise.”

So far, there have been over 300 reported incidents of attacks and arrests against the press at national George Floyd protests, according to the Press Freedom Tracker.
Defense Attorney Greg Doucette (@greg_doucette) has curated a collection of over 300 videos showing police misconduct during the protests.