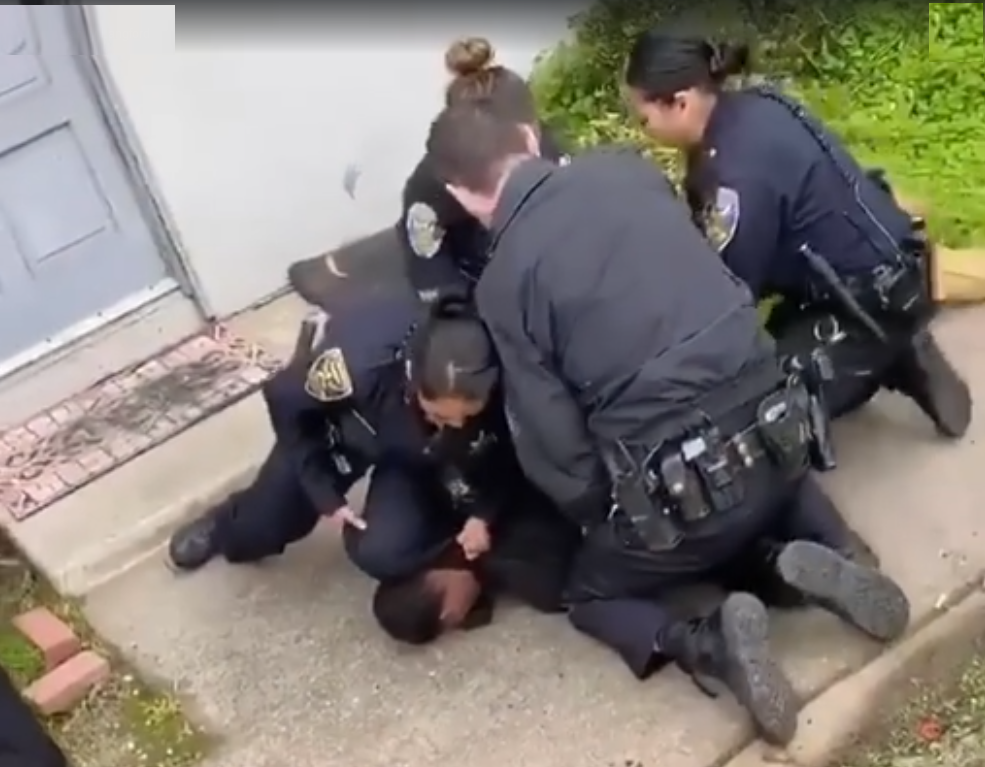 With the nation up in arms over the killing of George Floyd at the hands of Minneapolis police officers, a video emerged in San Francisco this weekend showing a SFPD officer using the same deadly tactic, kneeling on the neck of an immobilized Black teenager. The story was first reported by the San Francisco Examiner, which learned about the video after it was posted on Facebook.

On January 25, 19-year-old Kajon Busby was thrown to the ground by three SFPD officers who had been called to a verbal dispute between Kajon’s mother and the next door neighbors.

In the video, Valle can be heard attempting to explain the violence by telling the cameraman, “We told you to leave, but you didn’t want to,” as if that fact, if true, justified this violence.

All three officers then misrepresented the events in their reports, the San Francisco Public Defender’s Officer said on Monday, with Valle claiming she put her knee on Kajon’s back only, and the two others attempted to omit Valle’s violent conduct altogether.

San Francisco District Attorney Chesa Boudin told the Vanguard on Monday, “The case never should have been filed. I personally went to court to dismiss it today and I have already implemented policy changes—more to come—to ensure that we won’t file that kind of case in the future.”

The video is naturally drawing comparisons to George Floyd’s death in San Francisco.

San Francisco Public Defender Manohar Raju said, “We have had a few people look closely at it now and everyone who has looked at it closely agrees that the knee was on the neck.”

He said, “There’s no reason to do that when someone is already on the ground, potentially cutting off blood flow or breathing.”  He noted the reason that the Floyd incident has become an international issue is “because the knee was on the neck and he died.”

Raju said, “Just because our client didn’t die, doesn’t mean it was a proper technique to use.”

Raju added that the incident was “similar enough that we have grave concerns for our community.”

According to the public defender’s office, Busby was asked to leave and he didn’t.  The situation escalated from there.

Deputy Public Defender Alejandra Ramirez, who represented Busby in his criminal matter, said that he was accused of resisting arrest and criminal threats.

But she noted in the video he is not flailing, he is not spitting, “he is not doing anything other than holding his phone in his right arm.”

Ramirez noted, usually with a PC section 148 charge, there are more details as to what warrants the charge.  In this case, “there’s nothing.”  They said “he was actively resisting, and that’s it.”

The police were called twice in this case.  The first time by the mother.  The initial incident involved Busby waking up to a phone call saying that his neighbor had stolen the dog.  Busby went to talk with the neighbor, and the police told him to leave the area.

Ramirez said that the police had initially discovered the dog jumped the fence into the neighbor’s yard, decided there was nothing here and left.

The second time the neighbors called the police.

According to the report in the Examiner, it was at this point that Busby claims he was about to leave but officers grabbed him, bringing him to the ground.  He was detained for a period of time.

Busby claimed to the Examiner that he struggled to breathe or talk while the knee was to the back of his neck.

Alejandra Ramirez does not believe that the use of force was warranted in this case.

“Whatever words were being said does not warrant him being put on the ground,” she said.  “There was a much better way to tell him to back away.

“None of that was attempted, they just went straight into arresting him,” she said.

Manohar Raju pointed out that in addition to whatever injuries that Busby sustained, “there is also the trauma of being treated that way by law enforcement.

“There’s the physical trauma and the trauma of those watching him,” he said.  He noted that “all these people are watching this now.”

Alejandra Ramirez noted that her client didn’t tell her about the manner of the arrest.  She asked him why he never told her and he said, “I didn’t think it mattered.”  She said, “This was normal to him. That in and of itself is infuriating because there’s no reason for a 19-year-old African American young man to think this is normal.  It’s not normal.  What happened to him is not normal.”

She said this is a difficult conversation and “it’s difficult for him to even speak about it.”

This is just the latest in a string of incidents involving the San Francisco Police Department and use-of-force complaints by people of color.

“I’m not sure what the reasons are for it, but it’s time to stop,” Manojar Raju stated.

In the Public Defender’s Office press release Monday, they said: “Police who abuse their power should not be wearing a badge. While oversight and early intervention is important, it means nothing if there is rarely any meaningful disciplinary action or change. A massive overhaul of our policing system is needed, and it must be driven by the wisdom of the communities most impacted by systemic abuse.”

They also added, “The time for incremental reform in the SFPD has long passed.”

Mr. Raju told the Vanguard, “We should be focusing on ending it (and) rooting out those officers that have the propensity for violent behavior (and) really work on healing the trauma.”