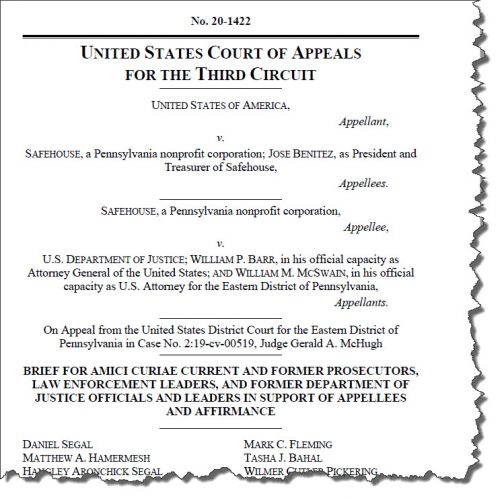 Eighty-five current and former prosecutors, along with law enforcement officials and other leaders, filed an amicus on Monday in the hopes of combating the epidemic of opioid-related deaths.

The brief was filed in support of the nation’s first lifesaving overdose prevention site, which the U.S. District Court for the Eastern District of Pennsylvania found to be both legal and fully in accordance with federal law.

“Many of amici’s communities have experienced unprecedented levels of fatal opioid overdoses,” the Amicus notes.  “The criminal justice and law enforcement agencies that amici lead or have led strive daily to respond to opioid-related overdoses, while also combating hazards posed by public injection. Discarded needles pose a safety risk in parks and on streets.”

The goal is to open a facility specifically designed to address the public health emergency posed by the epidemic of opioid-related overdoses.

“Like a syringe exchange, the contemplated OPS would provide people who inject drugs with sterile equipment to minimize the spread of illness,” they write.

Nationwide, 67,367 people died from drug-related overdoses in 2018, and since 1999, the drug overdose  death rate in the United States has increased nearly four-fold. In Philadelphia, where Safehouse is seeking to open the nation’s first overdose prevention site, there are an average of three opioid deaths per day—making the rate of overdose deaths about triple the homicide rate.

“Existing drug policy strategies are insufficient to respond to a crisis of this scale,” they write.

Signed by current and former elected prosecutors, police chiefs, sheriffs, and former U.S. Attorneys and Department of Justice officials, the brief argues that overdose prevention sites (OPSs) are proven harm reduction tools that save lives, promote community trust in the justice system and help alleviate the adverse impact of substance use disorder.

“Our nation’s misguided war on drugs has done nothing more than push individuals who use substances into the shadows and destroy communities in the process,” said Miriam Krinsky, Executive Director of Fair and Just Prosecution, the organization that coordinated the brief.

She added, “We need look no further than the opioid crisis that continues to cut far too many lives short to see the failure of today’s drug policy. Now, as we continue to face a pandemic that puts people who use substances at even higher risk of harm – are also seeing thousands across the country pleading for government to acknowledge the sanctity and dignity of all lives – it is even more

crucial that we adopt proven approaches that divert people away from the criminal justice system and avoid further needless loss of life.”

The amicus brief was filed in the context of an overdose crisis exacerbated by the rampant coronavirus pandemic, and recognizes that different approaches are needed to save lives and create greater access to treatment for those struggling with opioid use disorder. Amici argue that prohibition of OPSs and threatening prosecution of its sponsors undermines community trust in the justice system and faith in the fair and sensible application of our drug laws.

As the current nationwide protests against systemic racism and police brutality underscore, law enforcement’s legitimacy depends on valuing all human life, including adopting humane and life-saving public health approaches to substance use disorder.

Amici further argue that interpreting federal criminal law to bar empirically validated harm reduction measures makes no one safer, but rather, only impedes cooperation between criminal justice agencies and the communities they serve. Amici point to harm reduction models across the globe that use OPSs as lifesaving tools and have fortified both public trust in the justice system and effective responses to overdoses.

“Prosecutors have an obligation to protect the health and safety of every member of the community, but we  have been hampered by a system that looks to outdated criminal justice responses to address substance use, rather than the public health strategies we know work,” said Philadelphia District Attorney Larry Krasner,  a signatory to the brief.

“The war on drugs has done nothing more than criminalize and destroy communities, and if we do not take a more sensible approach, we will continue to force people into cycles of incarceration,” he added.  “As protests rage on our streets for a reimagining of public safety, we have an opportunity to implement life- saving strategies that are proven to reduce individual harm and make communities safer.”

Amici also argue OPSs will help communities cope with COVID-19. Among other serious consequences,  social distancing orders have exacerbated the difficulty of identifying victims of overdose in time to intervene – and since these orders have been adopted, fatal opioid overdoses have spiked. Further, many people have relapsed as threats of infection, economic dislocation, and social distancing have increased stress, severed support networks, and precluded in-person treatment services.

“Law enforcement agencies around the world have embraced harm reduction approaches because they have come to realize that substance use requires a public health response, not a criminal justice response, to save lives,” said Washtenaw County, Michigan, Sheriff Jerry Clayton, another signatory to the brief.

“With a global pandemic already taking far too many lives and straining the resources of our health systems, we must find a way to end the overdose epidemic that has taken over American streets,” he added. “That means using every tool at our disposal, including overdose prevention sites to allow law enforcement to focus on community interests that pose deeper public safety concerns.”

Between 1981 and 2006, the number of drug arrests in the United States quadrupled to nearly two million per year. And according to the Brookings Institute, new admissions into state and federal prison in recent decades are largely due to drug offenses. Yet, research from The Pew Charitable Trusts demonstrates that these massive increases in  drug arrests and drug-related incarcerations have not led to decreased drug use, arrests or overdose deaths. And recent polling indicates that 60 percent of the American  public support OPSs as a   tool to reduce fatal opioid overdoses.

The brief was written by teams at WilmerHale and Hangley Aronchick Segal Pudlin & Schiller and coordinated by Fair and Just Prosecution, a non-profit organization dedicated to promoting a justice system grounded in fairness, equity, compassion, and fiscal responsibility.

Read the brief here and see here for a list of amici.

Share:
Tags:Drug OverdoseFair and Just ProsecutionLarry KrasnerMiriam KrinskyOpioid AddictionProgressive ProsecutionSheriff Jerry Clayton
Previous : Anatomy of the School Board Selection of Joy Klineberg
Next : City of Sacramento Sued Over Law Making It Illegal to Not Stand for the National Anthem