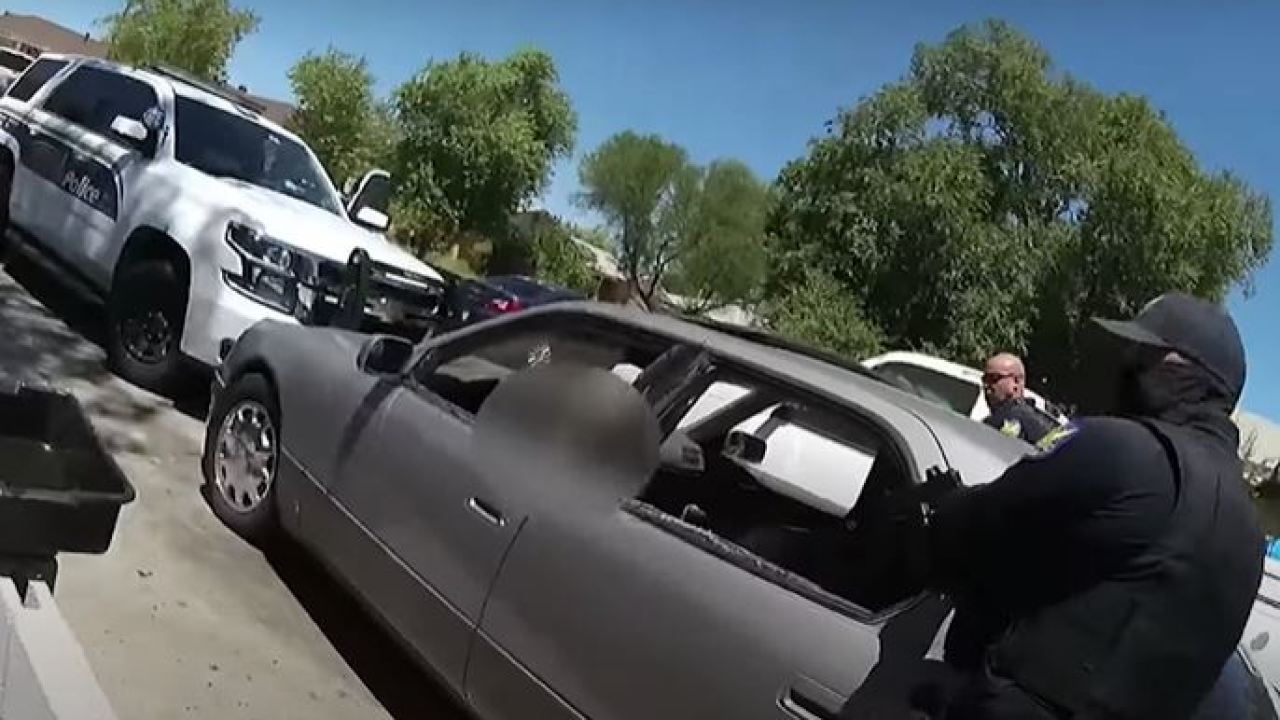 Twenty-eight-year-old James “Jay” Garcia was shot to death by police officers while he sat in his car, parked outside his home.

A video of the incident, recorded by a witness who stood on the other side of the street, went viral on social media this weekend. The two-minute video shows four officers with guns drawn and pointed at Garcia who was in his car. The angle of the footage did not clearly show Garcia’s actions. You can hear witnesses shout, “don’t shoot him” at the officers. Several gunshots followed the plea.

The Phoenix Police Department released a video of Sgt. Mercedes Fortune explaining the shooting, She claimed that social media posts included misinformation of what led up to the shooting. While it is not clear which misinformation the officer was referring to, many posts claimed that Garcia was unarmed when he was shot—Phoenix PD said he had a gun and lifted it toward officers which resulted in the shooting.

A short body cam video from an officer who was on the scene but not directly involved in the killing was released, showing the aftermath of the incident where an officer pulled a gun out of Garcia’s car. According to Sgt. Fortune, officers spoke with Garcia for 10 minutes and asked him to exit the vehicle before he was killed.

Now, Representative Diego Rodriquez and Senator Martín Quezada have called on the Phoenix PD to release all officer-worn body camera footage and provide any other missing facts surrounding the

shooting to get a clear understanding of what lead to Garcia’s death.

They claim that the Phoenix PD produced video that is “filled with information selectively released by Phoenix police to bolster a narrative that is disputed by witnesses.”

“Releasing body footage from the officers directly involved before all witnesses and offer interview conclude will compromise the investigation,” Sgt. Fortune said, explaining why only some footage of the incident has been released.

“Releasing the information which we are asking for will not negatively impact the internal investigation in any way, but it would go a long way in establishing a greater level of trust between the community and law enforcement,” said Quezada.

“There are still too many unanswered questions about this deadly shooting,” added Rodriquez. “We still don’t know if James Garcia posed a threat, if he was the suspect police were seeking after receiving a 911 call, or what, if any, de-escalation tactics were employed before officers used deadly force to end this encounter. If the Phoenix Police Department believes there is reason to release a short excerpt of body cam video then it should release all the video so the public can see the unvarnished truth of what really happened.”

In addition to all the raw body camera video, the Congress members also asked for the release of the complete 911 call, the description of the suspect police were looking for, radio logs, completed police reports, and the prior shooting and complaint histories of the officers involved.

A few hours after the Arizona House Democrats’ statement was released, Chief Jeri Williams of the Phoenix PD released a message, promising the release of body-worn video.

“To meet the needs of our community and build trust, we will move that timeline up, releasing available body-worn video within a 10- to 14-day window,” she said, noting the department’s usual goal of 45 days to release this type of video and information.

“We hope this step will allow our community to feel confident in the findings,” the Chief said.

Rep. Rodriquez and Sen. Quezada have yet to make a statement on whether these efforts from the Phoenix PD are sufficient enough to help mend relations between the Phoenix community and their law enforcement.

Chief Williams also announced that the FBI will now play a role in investigating the officer-involved shooting.

“I support the efforts of our officers and believe in the quality work they do day after day,” she concluded.

The death of James Garcia adds to the already existing fuel to hold officers accountable for their use of force, especially against communities of color. These protests and scrutiny of law enforcement have expanded across the country since George Floyd, an unarmed black man, was killed by a Minneapolis police officer on May 25, 2020.