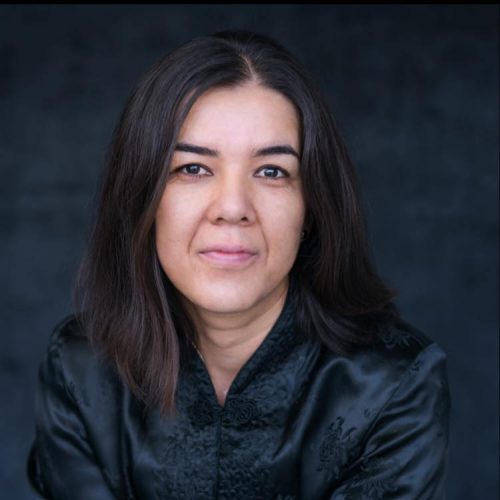 Vigdis Asmundson already has a household name in Davis, thanks to her parents Vigfus and Ruth, both of whom are former Davis mayors—Ruth having served twice, in 2004 and 2008.  Vigdis was a finalist for the appointment to the seat vacated by Cindy Pickett and now she is running for the two year seat—which could be the last at-large election in the city of Davis.

She spent 19 years as a teacher before moving on to the California Department of Education.

“I have been involved in education for my entire career,” Asmundson told the Vanguard during an interview over Zoom on Monday.  “I love education, I love schools and I love students.”

She believes the district “can really benefit from someone who has been in the classroom for so long.”

Vigdis Asmundson started in the Peace Corps out of college, working in community health and disease prevention.  She worked with educational groups in West Africa in Togo, and at a school in 2010 worked in Somaliland.

She also noted that her mother returned to Philippines as often as possible.

She explained that her mother was a huge inspiration to her village, “being one of the first people to go to college in her village and to get a PhD.  So we always make sure we go back to the school when

we’re in the Philippines.”

In the US, her most recent teaching experience was in Fairfield—a very different experience from Davis.

“The school I was teaching in was 88 percent non-white,” she said.  “Eighty-three percent free and reduced lunch.  Thirteen percent English-language learners.”

Asmundson found the appointment process “fun,” getting a chance to look through her body of work “and thinking about all of the things I had that prepared me to contribute to these decisions.”

She enjoyed talking to parents, teachers and community members “and hearing about their thoughts.

“That has been so fun for me,” she said.

At the end, when she was a finalist, “The questions were so interesting, they really got at what are the challenges that are facing our schools and the priorities of the board and the direction they want to go.

“What can we do to be supporting our students, and our families and our teachers,” she said.

Her reaction to not getting selected was, “That was fine, you never really know what is going to happen.

“I was absolutely prepared to serve,” she said.  “But I knew it was a process.”

In terms of the petition, she said, “I was surprised.  That was a group of parents that was unrelated to me entirely.  I always appreciate that our voters in Davis want to (be) involved, engaged.”

She found it “heartwarming” to see so many people involved.  She said, “So many people, so quickly got this motivated to be a part of our process.”

She found it “astounding” that they were able to organize so quickly to pull off the petition drive.

“It really showed how much people care about our schools,” she said.

In terms of what made things different this time, she wasn’t so sure.  “I know that Davis is a very motivated community,” she said.  “It’s been very involved for a very long time.  We don’t have people that are going to stay quiet about things.”

She added, “I don’t want to second-guess the board’s decision in any sort of way, but I absolutely want to reward civic engagement and people being involved in the democratic process.”

Right now she is the only announced candidate for the seat.

For her, she said, “I knew I was going to run when I decided to seek the appointment.  I feel just as committed to wanting to serve my community now as I did then.  If the seat was open, then I’m still committed.”

Her decision to seek this seat as opposed to a four-year seat was relatively easy—“I don’t live in Area 2 or 5,” which are the two districts up for election, currently held by Alan Fernandes and Bob Poppenga respectively.  Bob Poppenga has already announced he won’t seek reelection and Alan Fernandes has not formally decided.

This will be the last full city election.

Vigdis Asmundson explained that her parents met when her father was Davis’ mayor in the early 70s.  She said that even when neither was a public servant, “they always had a sense of wanting to be involved in the community.”

“Even though my Dad wasn’t a politician when I was a kid, he really cared for Davis and always wanted the best for Davis,” she explained.

She said, “Their sense of service has absolutely made me who I am.”

She noted that all of her sisters still live in Davis.

“We are really deeply committed to the city,” she said.

One of the lessons she learned: “Everybody does have wonderful and important opinions. It is important for us to be able to hear all of our voices.”

She noted the current crisis has created huge levels of stress, and “it’s important for people to speak up and express how they’re feeling,” she said.

Vigdis Asmundson said that, as she was growing up in Davis, her mother was proudly Filipino and “really raised us to be proudly Filipino,” she said, “To be honest I did not—if I had experiences that were negative when I was a kid, I don’t think I would be able to recognize them.”

She did say, “As an adult I have had more racist experiences against me in Davis.”  She wasn’t sure if she was just able to recognize them better but she also said, “I do have friends that have told me as adults, that I grew up in Davis with, that have said yes things definitely happened to me when I was a kid.”

So far she is the only announced candidate for this position.  It will be on the November ballot.

18 thoughts on “Asmundson, Running for the Open Seat, Talks about Her Candidacy”