The purpose of Sunday’s column on the University Commons was to put the claim that there will be a “wall” into some perspective.  Perspective is important because it seems like the CGI of the large and long building impacted the views of the public as well as some on council.

I am sensitive to the comments of Tia Will who said, “I believe that you, and perhaps everyone trying to minimize the impact of a building of very different height in the neighborhood speak with such certainty is because you and they are not affected by it.”

Eileen Samitz added, “I find it astonishing that you are trying to diminish the enormity of this 7-story monolithic mega-dorm.  You have the luxury of not living anywhere near it, so you conveniently dismiss its mass and scale which are completely out of proportion while you also ignore the overwhelming impacts it would bring.”

While I would acknowledge that I am not immediately impacted by this or some of the other proposed buildings and agree we should take immediate impacts into account when we make planning decisions, I

also believe it is important to still put project impacts into perspective.  Part of that perspective was to show how quickly the impacts of even a relatively large project dissipate pretty quickly.

I also appreciate Eileen Samitz bringing the shadow study to bear on this discussion as well.

Samitz raises some good points here, which further discussion should take into consideration:

1) Sun height during winter solstice shouldn’t only be looked at high noon.

2) Why are the apartments to the north being in a shadow considered irrelevant? Look at the significant shadow darkness during the winter solstice imposed on the apartment complex to the immediate north. Do these significant impacts on these renters not count?

3) Even the interior courtyards in apartments to the north get completely shaded.

4) Some single family-houses on the east side of Anderson would get impacted by the shadow in the afternoon, even in the summer.

That said, I do find it a bit ironic when she adds, “You clearly are not objective on this at all…”

My objective here was to put the height concerns into perspective—I actually believe that, looking at the shadow impacts, it bears out my point rather than refutes it. 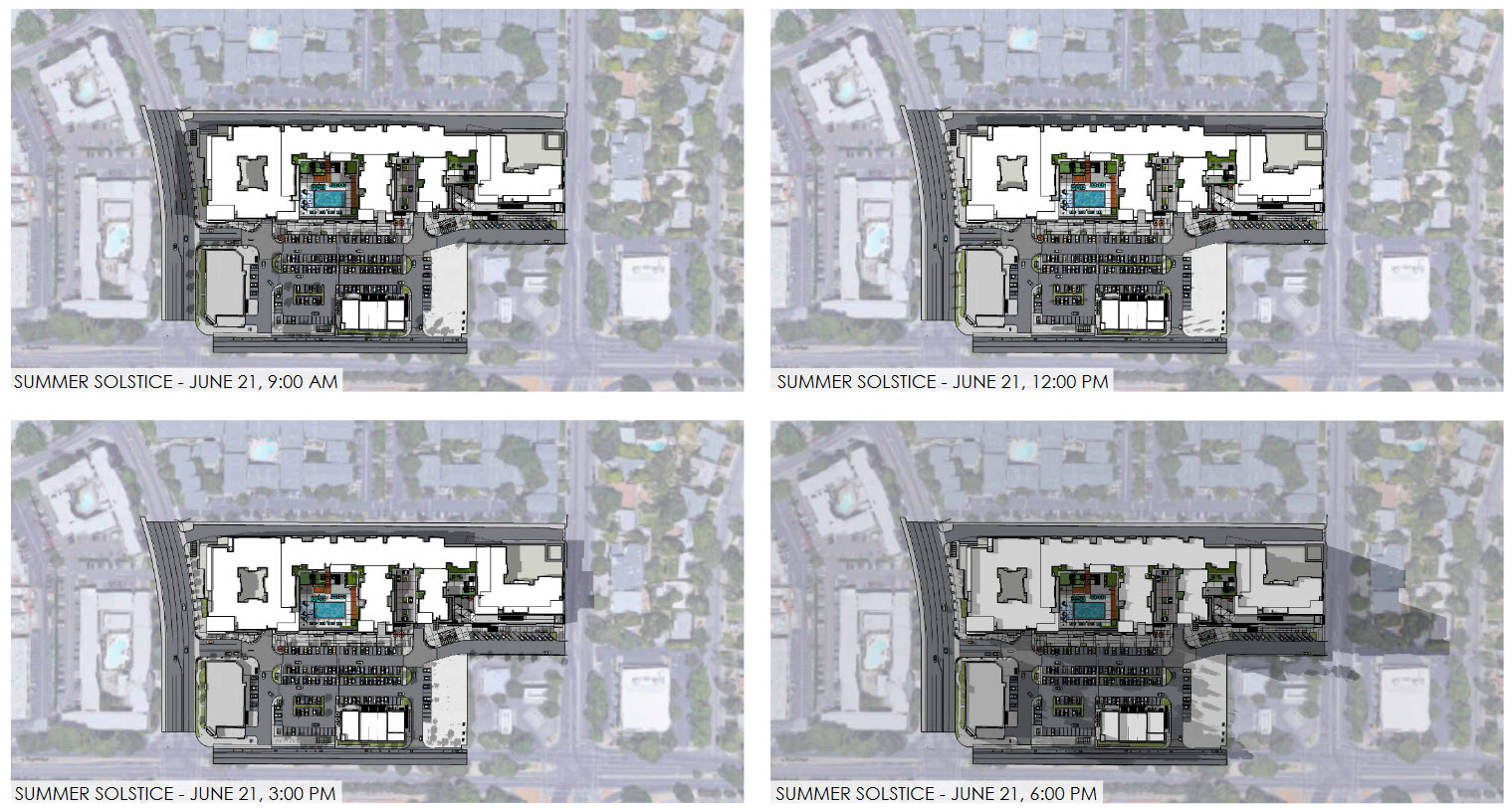 Basically the summer impacts show very little impact.  There starts to be a shadow directly across Anderson at 6 pm, but that is fairly late in the afternoon (or early evening). 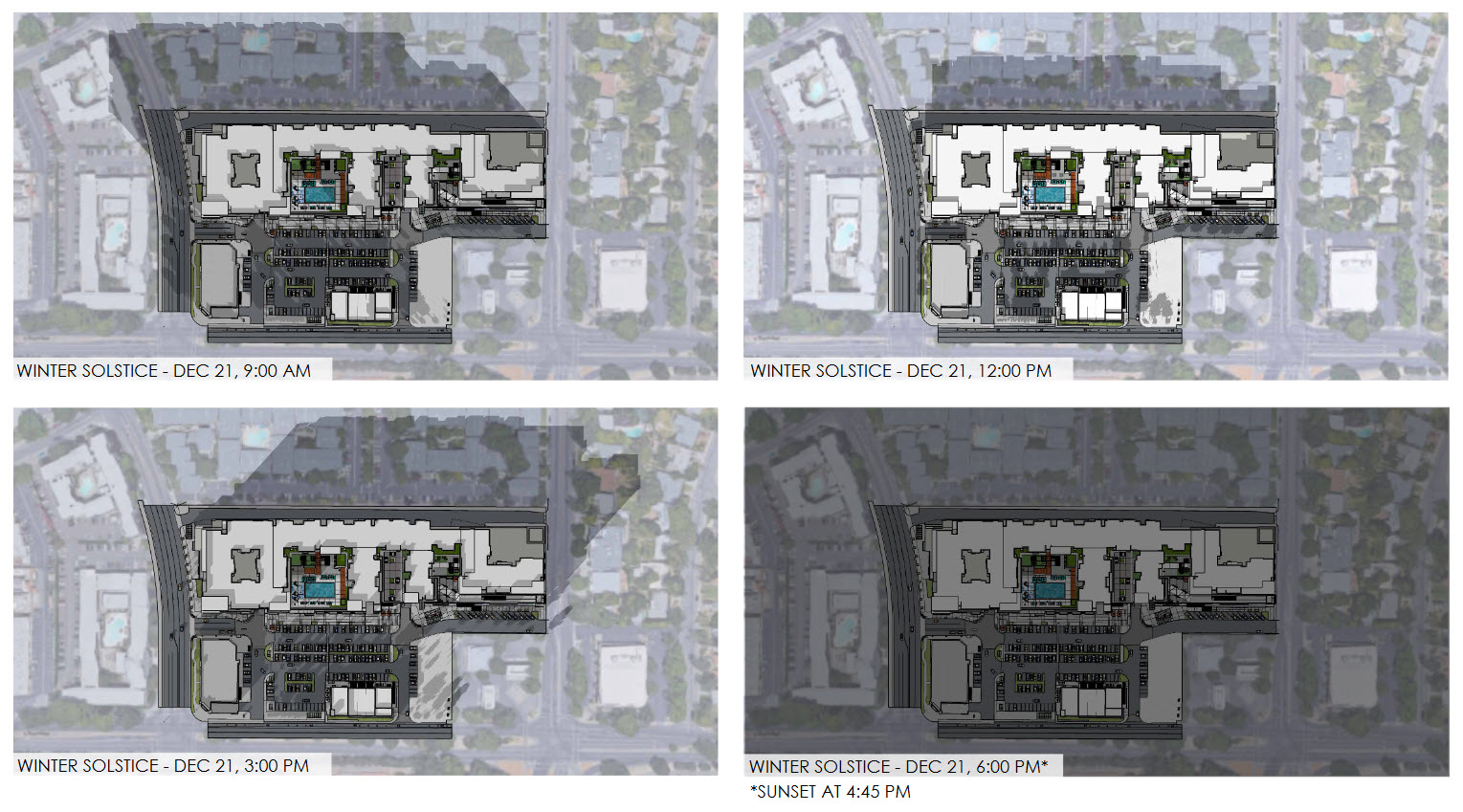 The bigger effect is what happens in the winter when the sun drops a bit lower in the southern sky.  The shadow does show the back side of the apartment complex is going to be in shadow for much of the day in December.

The shadow does have an impact across the street on a few single family homes by 3 pm.  By 6 pm of course, it is dark outside.

So what do we learn from this?

First, that the impact of the structure is pretty limited.  There will be a shadow for a month or two in winter on the apartments.  And it does extend its shadow in the winter months to a few (one or two) single family homes.

That means most people in the neighborhood are going to be unaffected by the shadow.  And as we pointed out most single family homes are over 500 feet away and will not see, let alone be impacted, by this.

Second, should we ignore the impacts on the apartments?  My sense is most students who are going to live in those apartments are not going to notice, let alone care that there will be a shadow much of the day for the back side of their apartment.  The advantages of being able to walk and bike to campus probably outweigh the limited disadvantages.

Third, as we have seen, the backside of the U-Mall is in disrepair and this will probably actually improve the overall viewshed, such as it is.

Finally, the biggest picture is the weighing of the impact of building this development versus leaving the structure as is.

The key unanswered question is to what extent is there a middle ground here.  Is a reduced height building fiscally viable?  Can they move the footprint to allow for the separation of the parking from the residential to allow the building to return to four or five rather than seven stories?

Part of why I engaged this conversation was to see what the real impact would be.  The direct impact looks like it will largely be on part of the apartment complex to the north of the project, with a limited late afternoon impact in the winter to the northeast.

Does that impact constitute a deal breaker for the community or the council?  That is a decision to be made by the council in a few weeks.

40 thoughts on “Commentary: Casting a Shadow on the University Commons…”