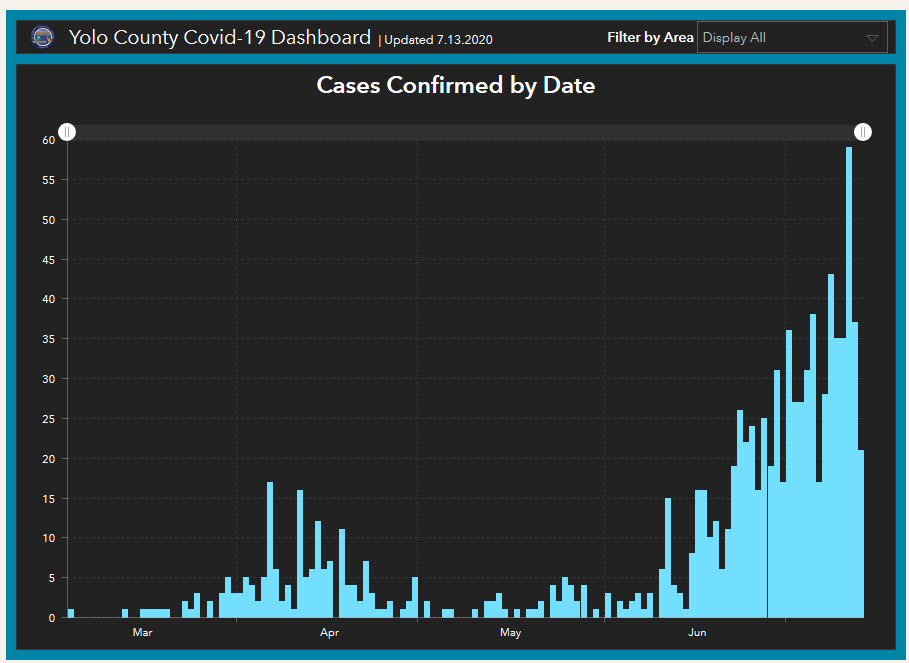 Remember May?  In Yolo County there were just 40 reported cases.  The Board of Supervisors pushed for attestation to re-open the county.  The state, under pressure, expedited re-opening—even as experts warned it was too soon.  And now, COVID is worse than ever.  And the state is rolling back their re-openings.

Yolo County, which as late as early June was one of the lesser impacted counties, is now on the list of counties affected by the new order from the governor.  “These closures will impact 29 counties that are currently on the State’s List and represent more than 80% of the total population in California. In addition, all alcohol-only bars and breweries must close operations, both indoor and outdoor, statewide,” the county reported.

Not mentioned are schools.  But the pace of the explosion of cases is probably going to render moot the question of whether to re-open schools.

According to the county release: “Yolo County will soon exceed 1,000 confirmed cases this week when four weeks ago on June 15th the County only had 255 cases. Residents and businesses are all required to wear face coverings, social distance by at least six feet, and stay home as much as possible to help lower the spread of COVID-19.”

“Our local community continues to bear the brunt of the COVID-19 crises. As the virus spreads locally through a failure to observe health protocols, the impact widens,” said Chair to the Yolo County Board of Supervisors Gar Sandy.

Supervisor Sandy added, “The numbers of those infected continues to climb, our healthcare systems are jeopardized, and our business community is decimated. It is in everyone’s interest to wear face coverings and maintain social distancing. Avoid large gatherings at all costs.  We must remain vigilant and re-dedicate ourselves to driving the cases numbers down.”

What went wrong?  A lot of blame to go around.

The comments made by Tia Will, a retired physician, on the Vanguard yesterday rang true: “We made a huge mistake in reopening the county too soon. We did that on an attestation, which was basically a way of skirting some very real numbers which were not breaking the way the business community wanted them to. Our county officials succumbed to intense pressure from these private interests and we are now seeing the results in actual numbers of cases which will as the county health officer predicted result in more deaths, some preventable.”

But in my view this goes further.  And it impacts every level of government.

President Trump: We can probably write a book on all of the failures of his administration.  And someone no doubt will at some point.  I will make two brief remarks.  First, he pressed for the economy to re-open before the pandemic was under control.  That was a huge mistake.  Second, he refused to wear a mask.  I still believe that, with no other changes, had he simply from the start said to wear a mask and we can open the economy, a lot of his supporters would have followed suit and we would be in much better shape.

Governor Newsom: He got high marks for his handling from March to May.  But he succumbed to pressure from businesses and some of the rogue counties.  One of the big problems is that when a bunch of rural counties threatened to re-open, he could have fought them or he could have acceded to their demands.  In the face of protests and a threat to undermine his authority, he allowed the state to reopen.  I also think he has been too slow to respond to the humanitarian crisis in San Quentin and other prisons, and we will see how many people die as a result of that.

County Board of Supervisors: Again, they were early on proactive.  But Tia Will is right.  The county also succumbed to pressure and fought to re-open at a time when the pandemic was contained but not over.  They allowed businesses to re-open too soon and people got complacent and now we have gone from 255 cases on June 15 to nearly 1000.  In a month’s time, the number of cases have nearly quadrupled.

It’s not all the public.  About two-thirds of the public in California believes the state re-opened too soon.  That’s actually about the polling nationwide.  There is a heavy partisan split to those numbers.  There is a heavy red-blue state divide—although with the rise of COVID in Florida, Texas, and Arizona, all nominally redder states, we are seeing a shift, and the handling of COVID could turn Texas into a swing state this year.

But what we are now seeing is that it doesn’t take a lot to give COVID a new foothold.  A small percentage of people can cause hospitals to fill up and COVID to shut down large sectors of the economy.  Those who wanted to save the economy by re-opening have in effect probably made the economic crisis ten times worse.

I will never forget the commenters who in late May pointed out that we were letting one death in two weeks in Yolo County shut down the economy.  The truth was, that was a false statement at the time.  The reality was we were allowing the threat of COVID expansion shut down the economy and everything that has happened since that point bears it out—we needed to keep things shut much longer in order to contain this.

Maybe we’ll learn our lesson, but it doesn’t appear that some people are likely to admit mistake.  Already, I have received releases about shutdown protests scheduled for the state capital, as hospitals and ICUs are being overwhelmed and our system teeters out of control.

71 thoughts on “Commentary: With COVID Out of Control, Us Blind As a Bat, State and County Roll Back Openings”