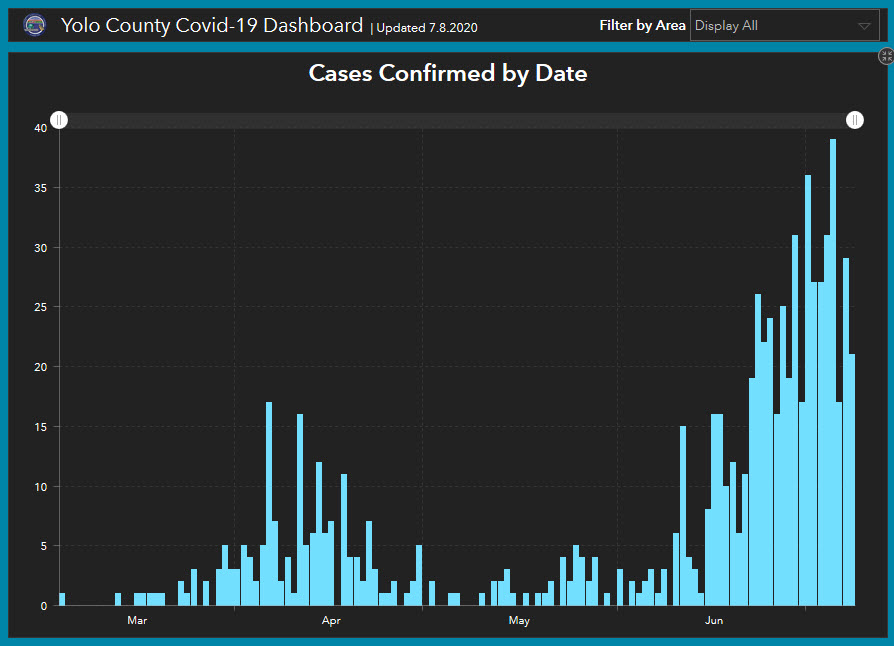 Supervisor Jim Provenza yesterday posted the county update on COVID—I made the quick comment, “You guys opened too soon” and, while it got a bunch of likes on Facebook, Provenza himself offered no response.  In fairness, Yolo County was hardly alone in opening too soon, and the public has been too lax on avoiding large gatherings and wearing masks, but what has happened in Yolo County should be illustrative of the danger lurking here.

The announcement yesterday was that Yolo County was placed on the state’s monitoring list for exceeding metrics related to elevated disease transmission and limited hospital capacity for three consecutive days, due to recent increases in confirmed COVID-19 cases.

For elevated disease transmission, the county exceeded the case rate of more than 100 cases per 100,000 residents over a 14-day period.

For those arguing that this simply represents more testing, back in April and May there was plenty of hospital capacity in Yolo County.  As of yesterday, Yolo County, according to the county release, “has 0% of staffed ICU beds available.”

According to the county, “Drivers for the exceedances include community transmission due to social and family gatherings, workplace transmissions and the increase in widespread testing at skilled nursing facilities.”

Yolo County is at 760 cases—a total that represents a remarkable and alarming increase over where things were in May when the county pushed the state to re-open.

Yolo County actually fought for approval to re-open.  If you recall, one metric was supposed to be no deaths over a two-week period, and on the 14th day, two people died at a nursing

facility.  But they were still able to get a waiver, and by May 20 were approved to move into stage 2.

That allowed for dine-in restaurants, hair salons, barbershops and even places of worship.

One person argued that one death in 14 days being able to shut down the county’s economy was “ridiculous.”

But some of us were concerned that there was a lack of an evidence-based approach to re-opening.  The pace of the re-opening seemed too soon, given the presence of the disease.

The result of opening too soon is that the rate of transmission, which rarely topped five cases in a day in May in Yolo County, has now absolutely exploded as the chart at the top shows—and it began right when things started reopening.

The number of cases in Davis remains relatively low at 79, but that is nearly triple what it was at the beginning of June.  The resurgence has led back to the closure of bars, restaurants no longer serve dine in, and the county has recently moved to crack down on businesses allowing people to come in without masks.

In a release on Tuesday, “the County in collaboration with the cities of Davis, West Sacramento, Winters, and Woodland have developed an enforcement strategy to ensure businesses and organizations comply with state and local health orders.”

The county’s Board of Supervisors adopted an urgency ordinance on July 7 allowing for the enforcement of penalties for violating Public Health orders, ranging from $25 to $500 for non-commercial violators and from $250 to $10,000 for commercial violators.

The ordinance is enforceable by the county within the cities, which may also adopt similar ordinances to expand the enforcement options available to their staff.

“The recent rapid spike in numbers of individuals testing positive for COVID-19 necessitates an increase in enforcement,” said Chair of the Yolo County Board of Supervisors Gary Sandy. “These efforts will primarily focus on those that fail to take appropriate measures to protect the public.  It is in everyone’s interest to promote a safe and healthy environment. Fortunately, the majority of our Yolo County community has been supportive, aware and engaged. We are grateful for their support and cooperation.”

I personally believe if people simply adhered to regulations on social gatherings and wore masks with social distancing, we could contain this virus without needing to shut down the economy again.

However, for those who believe that economy and containment are zero sum games, remember as I argued last week, the presence of the virus continues to suppress the economy.  People are not traveling, they are not going out, they are in essence voting with their feet.  That will hold the economy way back.

For those arguing that this is only a matter of more testing, it has been repeatedly pointed out that the rate of positive tests is increasing faster than the rate of testing.  In fact, testing is now in short supply, suggesting that we still may be undercounting.

They may also point out that the rate of deaths remains low.  That is true, but likely to change.  And is.  California reported that it recorded its highest number of deaths in a day yesterday.

California is nearing 300,000 cases—remember when California was doing relatively well compared to other states, before it prematurely re-opened?

California’s hospital beds were filled with 6,100 patients with COVID-19 as of Tuesday, state health officials reported Wednesday, bringing the number to a new all-time high.

California counties recorded 146 deaths on Wednesday, breaking a record for the most deaths in a 24-hour-period set on May 19 with 122, according to data collected by The Chronicle.

The LA Times reported that “deaths are a lagging indicator, and many experts predict an increase in the coming weeks.”

Governor Newsom said Monday that, while a higher percentage of coronavirus tests are confirming infections, “we’re not seeing a commensurate increase yet in mortality.”

Some of that may be due to a shift in who is getting the disease, with more younger people testing positive for the virus, a trend that has become more apparent as the economy has reopened.

But this week’s death toll shows how much we do not know about this, and is only hinting as to how bad it can get.