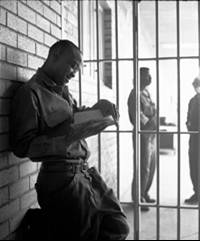 (This article was written by my client, Samuel P. Redmond III, who has served twenty years of a life without parole sentence. It is published with his express permission.)

Twenty years ago, I played a role in taking two innocent lives due to gang violence. Although I didn’t kill anyone, the prosecution sought the death penalty against me, and I made the decision to sign a plea deal and be sentenced to life without parole (LWOP). One reason I accepted the plea was that I was consumed with shame and remorse and felt I deserved to die in prison. The other was that my mother was devastated because she would never be able to hug me again if I went to Death Row, as all visits there are behind glass.

At the time I took the plea, it never occurred to me that an LWOP sentence was essentially the same as the death penalty. The only difference is in the mechanism of death.

After two decades of living with LWOP, I now fully understand the devastation and cruelty of this sentence. While I try every day to be the best person I can be to honor my victims Jessica and Michael (and all those who were harmed by this terrible crime), I cannot deny it is crushing to know that no matter how much I grow and change, no matter how hard I work to make up for wrongs done, I am still destined to die in prison. I am a dead man walking, and despite all my efforts to be positive and optimistic, dedicating myself to reaching beyond the prison walls to give back to the society from which I have taken, it is sometimes more than I can bear.

My only hope right now is a commutation of sentence. I hold on to it dearly, because it is all I have, although the chances of success are very small. I fear no one will recognize I am no longer the confused young man who was unable to get away from a horrendous situation in which two teenagers lost their lives. I have matured and grown through my dedication to facing up to and healing from the trauma in my life, which is what allowed me to become involved in this dreadful circumstance in the first place. Today, I am no longer capable of hurting another human being. I want the

world to see me for who I am now.

Commutations are totally at the discretion of the governor, and the process through which the few people are chosen to be the beneficiaries of this mercy is murky at best. I believe this process needs to be far more transparent, although I concede some improvements have been made. For example, since 2018 the governor has been required to publish an annual report on all pardons and commutations awarded during the year, containing important information about successful applicants. A review of these reports has revealed an apparent preference for people housed in certain facilities (such as the Progressive Programming Facility (PPF) in Lancaster) and who participate in certain programs (such as dog training). Even in the latest round of commutations announced on June 26, nearly 40% (3 of 8) of the LWOP sentences commuted were for people on the PPF and in the dog program.) This is unfair because I don’t have control over where I am housed or what programs are available on my yard.

It is frightening to write about my concerns of lack of fairness in the commutation process because I don’t want to offend the people evaluating my application, who have immense power over my life and future. But this is how I feel–for reasons beyond my control, there is little chance I will be seen for the man I am today.

All of this serves to underscore that commutations are not the answer to the problem of LWOP. Extreme sentencing, including LWOP, needs to be abolished so that everyone has the opportunity to go to the parole board and demonstrate their growth, rehabilitation, and fitness to rejoin the community. Ending such sentences does not mean everyone will be released from prison. If the parole board determines an individual poses a risk to public safety, release will be denied.

This is why I support Assembly Concurrent Resolution 186 (introduced on March 10, 2020 by Assemblymember Kamlager), which states that the Legislature recognizes the need for statutory changes to end extreme sentencing.

I know I have harmed many people by my actions, and there are probably many who believe, as I once did, that I deserve to die in prison. I can’t blame them for feeling this way, as I once believed revenge was the way to solve problems. It took me many years to realize otherwise.

The man I am today is dedicated to the principles of restorative justice. My life’s work is in helping others heal from the pain out of which they harmed others, and in working to create a more just and compassionate world.

The cycle of trauma and suffering on all sides simply must stop.

Share:
Tags:Life Without Parole
Previous : Letter: People of Color Repressed by a Decision-Making Body
Next : Looking Back: Case Not Handled ‘Righteously’