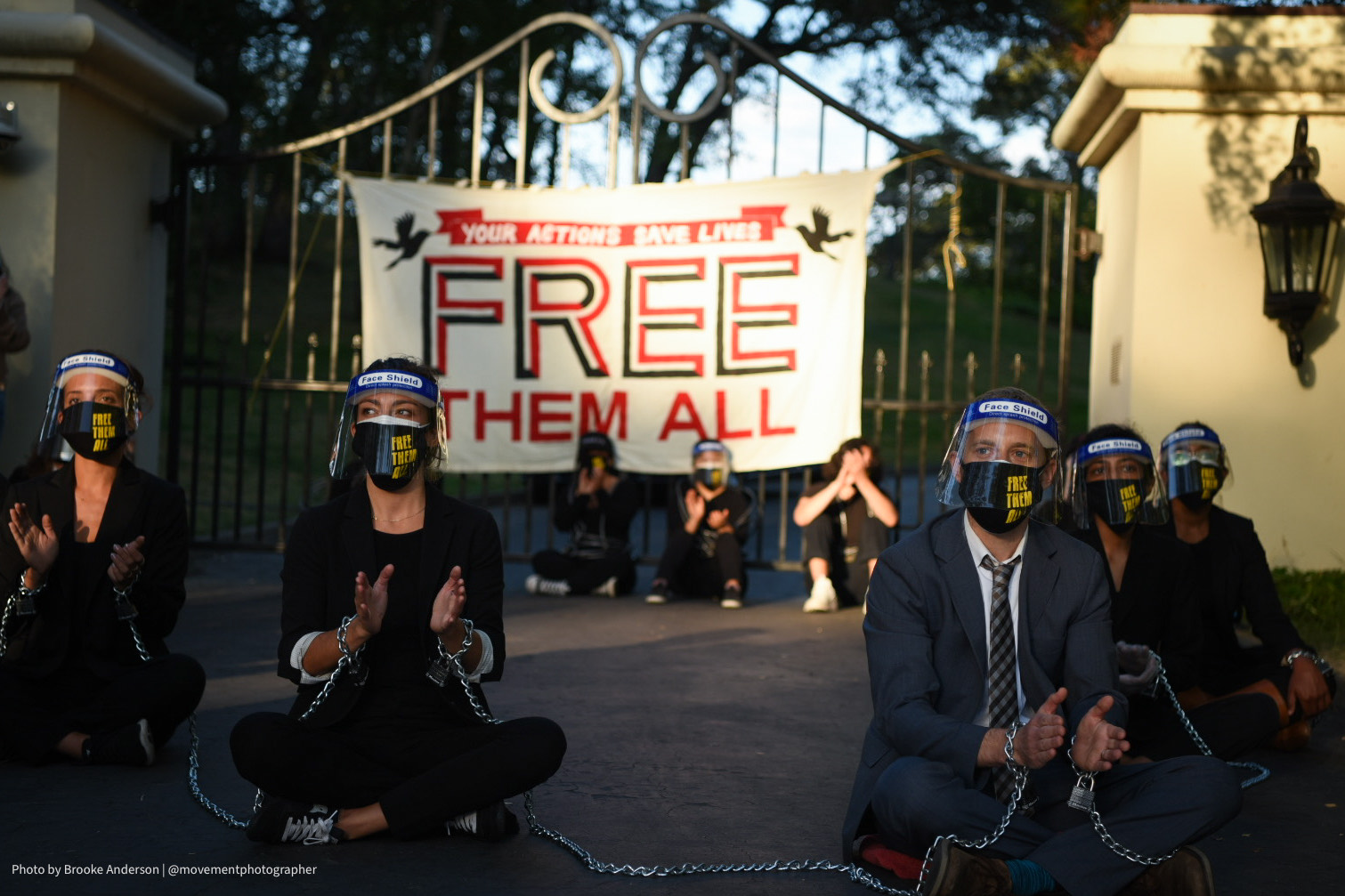 SACRAMENTO – Fourteen people – nine of them immigration law attorneys – were not only arrested Monday at CA Gov. Gavin Newsom’s Fair Oaks mansion protesting “life-threatening conditions facing people in prisons, jails and ICE detention facilities,” but they appear to have been subjected to extralegal treatment by law enforcement and possibly “retaliation” by the Governor’s Office.

The protestors chained themselves together and some were chained to the fence leading into Newsom’s massive complex. They were not released until about midnight Monday/Tuesday morning.

The release time was highly unusual. Virtually all protestors in nonviolent protests in Sacramento spend four to eight hours in jail in booking and are released without bail.

In this case, the California Highway Patrol, the arresting agency, filed special affidavits that led the courts to require bail in the amount of $42,000 to release all of the demonstrators, who would have had to sit in Sacramento County’s downtown jail for days before a hearing had they not been able to “make” bail.

The requirement for bail also appears to violate State Penal Code section 853.6, which states that those arrested for nonviolent misdemeanors should be cited and released, not booked into the jail. There are exceptions for violent crimes, domestic violence and similar charges.

In Monday’s case, those arrested were charged with misdemeanor counts of seldom-used unlawful assembly, failure to disperse and “riot,” although the protest was nonviolent and largely symbolic. CHP officers, supported by the Sacramento Sheriff’s Dept. did have to use bolt cutters and power tools to cut the chains linking the protestors.

Organizing under the banner of the California Liberation Collective, the group included several community organizers who are undocumented – those arrested are concerned about the “authoritarian response of the Newsom administration, the California Highway Patrol, and the Sacramento Sheriff Department.”

Organizers said there were “striking parallels between the alarming lack of COVID-19 protections” they experienced in local custody, and the “systemic medical neglect in state prisons and immigration detention.”

They denounced that treatment in pre-recorded speeches at yesterday’s protest. A recording of remarks from community leaders currently or formerly in state prisons and ICE detention is available here.

Protesters are charging they were “irresponsibly exposed…to COVID-19” at the county jail, where their masks and face shields were taken away.

The jail is supposed to be under a court order to provide masks and make the facility more “COVID-19 safe,” but that is not what the protestors reported in a brief statement released late Tuesday:

“In the 16 hours we were detained, we witnessed a blatant disregard for every COVID-19 precaution Governor Newsom preaches about. We are outraged that people incarcerated in prisons, jails, and detention centers face these life-threatening risks every single day. We are more committed than ever to amplifying the voices and leadership of incarcerated leaders, and we are more committed than ever to raising our voices to demand that Governor Newsom take action to save lives,” they said.

According to reports from supporting groups, the 14 arrested activists also described “a series of disturbing practices in the Sacramento county jail, including the lack of hand sanitizer and soap, having their masks removed and being forced to touch their mouths without hand sanitizer, and the complete lack of social distancing of any kind.”

Several activists reported they were denied access to water for nine hours or more, while some of the women protesters were denied food altogether during the 16 hours they were jailed – other protestors said they experienced medical neglect.

The action came as calls for mass clemency in state prisons are growing, and amid hunger and labor strikes organized by immigrants at Yuba County Jail in Marysville and Mesa Verde detention center in Bakersfield. Strikers have faced retaliation and demand action from Gov. Newsom, including immediately inspecting ICE facilities.

The California Liberation Collective’s demands of Governor Newsom are:

1. Use his power, including mass clemency and emergency release, to free people in state prisons.

2. Stop transfers from state and local custody to ICE and between California prisons.

3. Stop the expansion of immigration detention in California.

Activists said they are “outraged by the mounting death toll at San Quentin prison and rising infection numbers in state prisons and immigration detention centers,” and released this statement:

“Today, we mourn each and every life lost due to Governor Newsom’s failure to take action, and we offer our love and support to every family and community grieving these preventable deaths. We affirm that the health of each of us, depends on the health of all of us.

“Today, we are holding a mirror up to the hypocrisy of a Governor who banned the death penalty yet has presided over dozens of preventable deaths in state prisons; who issues hollow statements about racial justice while leaving Black and Brown people to die in squalid cells; who criticizes Trump when convenient, but who turns incarcerated Californians who are eligible for release over to ICE instead of their loved ones, and thus helps spread ICE COVID-19 not just across the U.S., but across the world.

“We are also here to honor the resiliency of people incarcerated in prisons, jails, and detention, who are survivors of violence, abuse, and trauma, who are our loved ones and family members, and who are organizing every day for freedom, justice, and for a better world for all of us. And today, we stand with detained immigrants currently on strike at Mesa Verde and Yuba. In solidarity with them, we demand that the Governor change course today. Governor Newsom, take action NOW to save lives!” 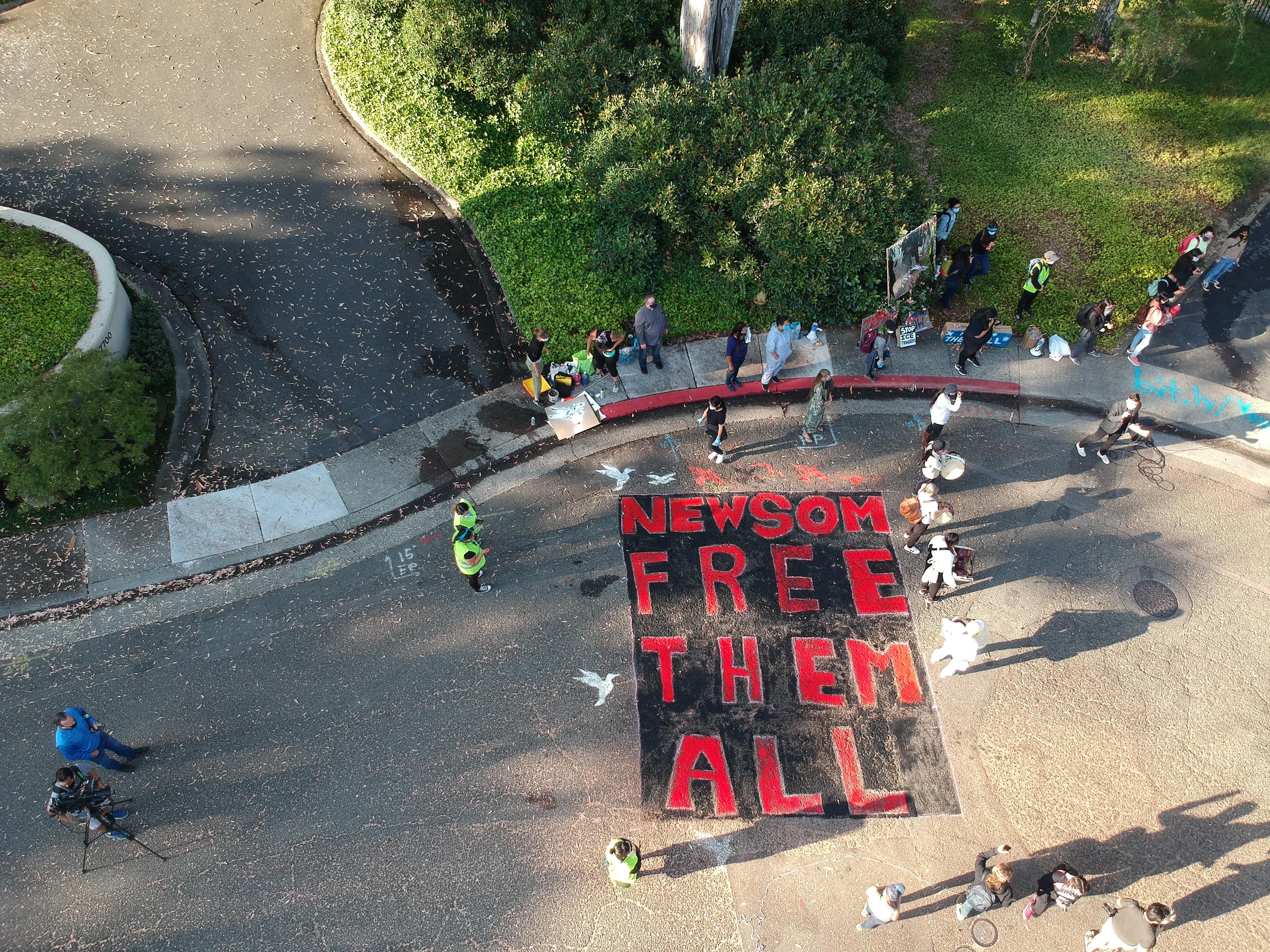 In a statement, they also noted that the protest falls some four months since the

“In the ensuing 130 days, doctors, health experts, and community groups have repeatedly urged the Governor to take action to save the lives of incarcerated people, writing a multitude of letters, holding innumerable twitter chats, organizing zoom press conferences, and staging socially distanced rallies. Doctors and health advocates have repeatedly warned physical distance is impossible in any type of incarceration, and that jails, prisons, and detention centers inherently pose severe public health challenges.

“Yet silence has been the Governor’s primary response, despite health officials having called for a minimum 50% reduction at San Quentin prior to the crisis there. Even a federal judge derided the Newsom administration’s ‘significant failure of policy and planning.’

“A recent move to release some 8,000 people from state prisons – merely 1 in 10 of the total population – was widely denounced as too little, too late. The releases do not go into effect until August 1, leaving people in prison vulnerable to COVID for several weeks, and could result in transfers of community members to ICE.

“Immigrants in detention centers across California, with the leadership of Black immigrants, have organized hunger strikes and protests in recent months, expressing solidarity with similar efforts led by people in state prisons. Immigrant rights organizers across the state are backing demands to defund an abusive system of incarceration and policing, and to invest in communities that have been most harmed by abuses.

“Advocates have noted that when policing and incarceration are fused with federal deportation, Black immigrants are disproportionately harmed.”