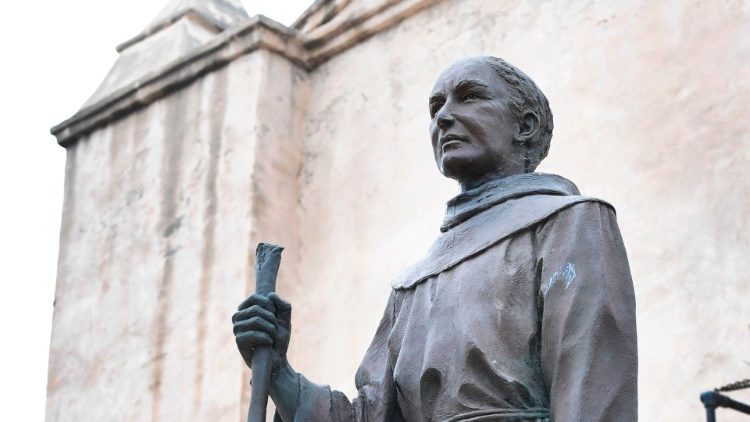 (Editor Update: The Vanguard has exclusively learned that the California Highway Patrol and other agencies Friday raided at least two homes of anti-racist activists to serve search warrants, reportedly as part of an investigation into the tearing down of the Junipero Serra statue at the Capitol. There is no word of any arrests.)

SACRAMENTO – A statue of Junipero Serra—toppled by protestors on July 4 where it had stood for more than 50 years in State Capitol Park—may not be repaired and replaced in its old spot after all, according to a letter from two California lawmakers.

The lawmakers said Friday they are urging the state legislature not to replace the statue of Serra, the Catholic priest who led the mission-building effort in the 18th and 19th centuries. And who social justice activists say was a colonialist, who whipped and enslaved the indigenous peoples of California.

Activists said statues of Serra and others of his time are “monuments to racism (and) genocide.” His missions are described by activists as “concentration camps.”

Sen. Scott Wiener, who represents San Francisco, and Assemblyman James Ramos, of Highland, wrote a letter to various legislative committees Friday morning demanding the formation of an advisory committee to revisit the state’s approach to the toppled statue.

The statue of Serra represents a “fundamentally oppressive” moment in California history, according to Wiener.

The letter, sent to several members of the Assembly Rules Committee and Joint Rules Committee as well as to Senate President pro Tempore Toni G. Atkins, encourages California to model a “much deeper and complete understanding of state and national history” amid the growing national debate around vandalism as a form of protest and the power of statues as historic symbols.

The letter advocates for the creation of an advisory committee to decide what to do with the toppled statue and what might replace it in Capitol Park.

“We must remember that Junípero Serra was a colonialist leader who caused immense suffering. When looking to replace the statue, I am asking the Joint Rules Committee to seek input from historians and leaders from communities—like the Native community—who to this day live with the impacts of Serra’s missions.”

Wiener and Ramos make clear that they are not proponents of vandalism. Instead, they present the toppled statue as a chance, 250 years after the first missions were built, to retell a more comprehensive account of colonization in California.

“Conducting a more thoughtful, transparent review of our ‘heroes’ is not about ‘denying history,’ but rather about acknowledging the injustices and suffering they initiated and perpetuated,” the letter says.”

Ramos sees replacing Serra for another historical figure not as erasing history, but as actively seeking to tell it in its entirety.

“We actually want a fuller and more honest appraisal of various figures designated as heroes. Without this greater context, we continue perpetuating injustices by ignoring and minimizing the suffering these individuals inflicted on their victims. More than ever, it’s a time for correcting omissions, and balancing the selective and too often sanitized history in schoolbooks.,” he said.

Wiener expressed a similar sentiment in a statement released alongside the letter, contextualizing the statue within the unique cultural and political moment in which it was brought down.

“We’re in the middle of a massive reckoning with the racism and violence that make up our country’s history, and with the current injustice that stems from that history.”

At present, the statue is protected under California Government Code section 13082, which mandates that the Capitol Building and Planning Commission “do all acts necessary to erect and maintain a monument to Father Junipero Serra on the grounds of the State Capitol.”

In accordance with that section of the code, the Joint Rules Committee is working to re-erect the statue on Capitol grounds, according to Wiener and Ramos, both of whom are members of the committee.

They propose, in their letter, that the committee instead redirect their efforts to exploring amendments to the code and either find a new home for the statue or replace it with a “monument better representing the state’s mission period and it’s [sic] impact on Native Americans.”

As calls to eradicate systemic racism continue to permeate the nation, Wiener and Ramos see the fallen Serra statue as an opportunity for the California government to show its commitment to reckoning with its violent history, noting, “Honesty and transparency will create increased awareness and understanding among everyone in our communities and take us toward a healing of the divisions so recently demonstrated.”

Share:
Tags:CaliforniaJunipero SerraRacismStatue
Previous : DNA Evidence Exonerates Triple-Homicide Men after 22 Years
Next : This Week’s COVID-19 Timeline in State Prisons: 8,000 to be Released – Too Little, Too Late?