PORTLAND, OR – On the steps of the Multnomah County Justice Center, a local Black Lives Matter speaker makes a passionate “Thank You” to the Wall of Moms, while surrounded city and county officials, along with estimates of more than 3,000 demonstrators.

The speaker captivated the crowd by thanking the abundance of support given by the WoM. He asked the crowd, “Portland, do you know why your moms are out here?” He then asked, “Do you remember George Floyd?” The crowd cheers at his name. The speaker continues, “They’re out here because when George Floyd died, he called for his mama… And all these Portland mamas heard him.”

I arrived in Portland around 8 p.m. and began making my way to Tom McCall Waterfront Park, where Portland’s Wall of Moms met with Black Lives Matter. These are just two of the organizations and groups who have been protesting police brutality, and now federal police presence in Portland. The federal police are made up of many departments too, like ICE, CBP (Customs and Border Protection), and U.S. Marshals, acting under the Federal Protection Service.

From the waterfront, the crowd marched to meet other groups and an even larger crowd at the Justice Center. The groups met around 9:30 p.m. and took time to acknowledge safety, goals, community, and even more safety. Leaders warned, the police will be out tonight and they will use force. Then, they led a chant renouncing fear and embracing courage.

Between 10:30 p.m. and 11 p.m. most of the crowd marched half a block from the Justice Center to the Edith Green-Wendell Wyatt Federal Building. The federal building was fenced in black steel, and reinforced by concrete “Jersey” barriers. The majority of protesters were peaceful but there were outliers.

A small group of no more than 20 began rocking the fence. After gaining momentum and swaying the fence, federal officers announced that interference with the fence would prompt crowd control measures, including force.

The group persisted, and true to their word, federal officers began shooting tear gas, pepper balls, and flash bangs. The group rocking the fence dispersed but the peaceful protesters had formed a line, using umbrellas as cover. They also had people with leaf blowers, clearing the air.

The leaf blowers are so successful that I recorded an officer with a leaf blower using it in the same fashion.

There were glaring gaps between all these: the federal building and officers, the officers and the fence, as well as between the fence and protesters. The problem with tear gas and pepper is that it is indiscriminate. It affects bad actors and peaceful protectors alike, lumping everyone on the side of criminal activity.

I moved between the front line and areas that were clear of gas because I was affected. Some rounds affected me more than others. After being subjected to crowd control measures for being in the same vicinity, I was disoriented. The gas affects your skin, eyes, and breathing. The best way to describe it is that it is disorienting.

Blinking tears out, heavy breathing in a mask, and irritated skin makes dispersing especially hard. Tens of people moved with their heads down, one arm out, coughing, trying to feel their way to safety. As the people at the front moved back, people from the back moved up. This went on until about midnight.

The Federal Protection Service eventually declared an unlawful assembly and dispersed the crowd even further. At this point most people left the area. There were still hundreds of people but not nearly the thousands had been there moments earlier.

They began to shoot pepper and tear gas at people for seemingly no reason. The people they targeted were not on federal property, and many from what I observed, were just standing, kneeling, shouting, and speaking. 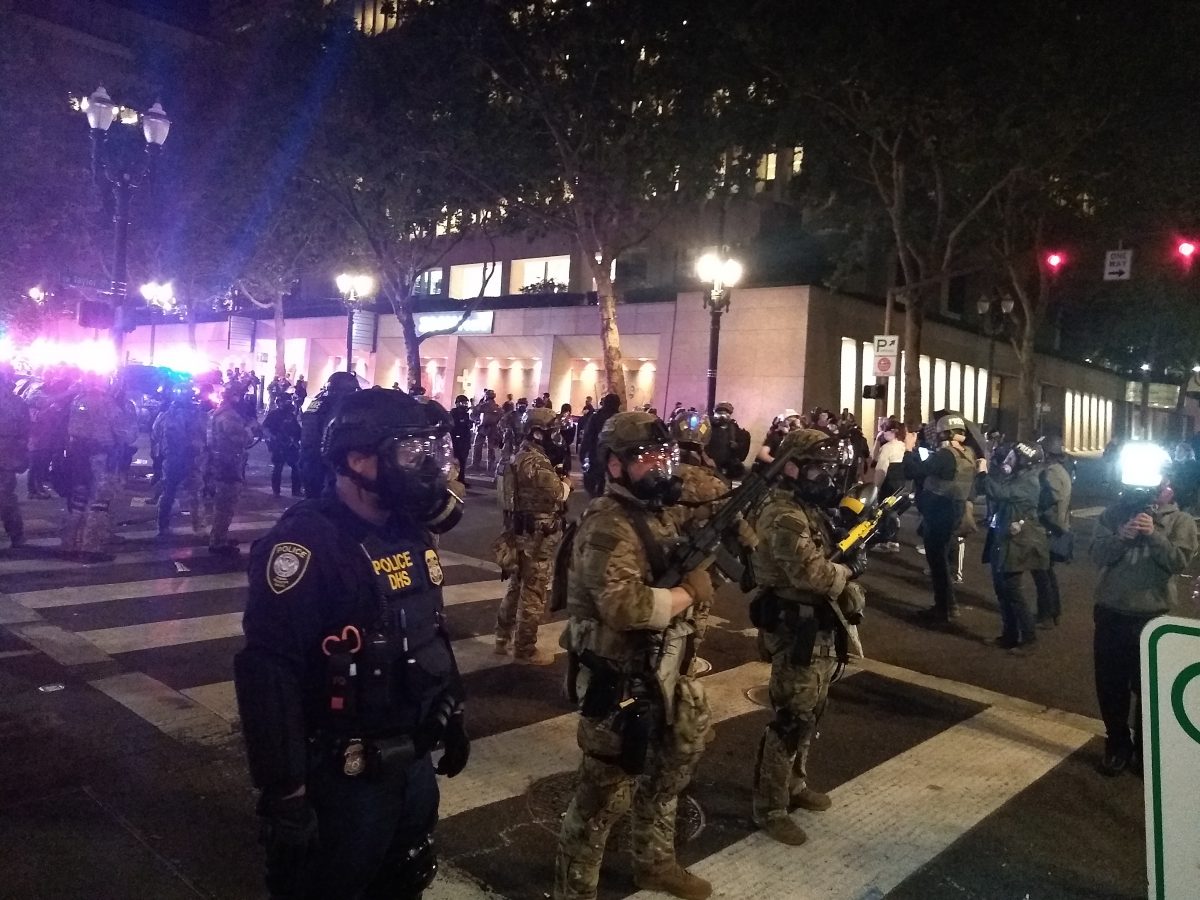 The holdovers from this dispersal moved to the street intersection near the federal building.  They created a phalanx with makeshift shields and umbrellas. Behind the phalanx, they started a small bonfire in the street, using pallets and rubbish. They were also blowing bubbles, and had a dancing drum circle.

As the tension eased, I felt the night was coming to an end, and I got ready to leave the scene. I was three blocks away from the federal building and I heard people shouting. “They’re coming, they’re coming,” they shouted as they ran.

I ran back to the federal building and got back there right after federal officers came out of the fenced area and dispersed the people having a bonfire in the street. What I saw next made me feel I was in a war zone. Multiple lines of federal officers cleared the streets using tear gas and flash bangs. The gas was so thick, I could not go back the way I came.

I circled back to get in front of the gas. With most people dispersed, and finding myself alone, I made my way back to my car. There was a large federal presence on the city blocks. They were lined up in a standoff with a few protesters. And, then they turned around, apparently to go in for the night.

Fireworks were sporadically tossed over the fence at federal officers, but officers did not appear to be targeting those who threw them. 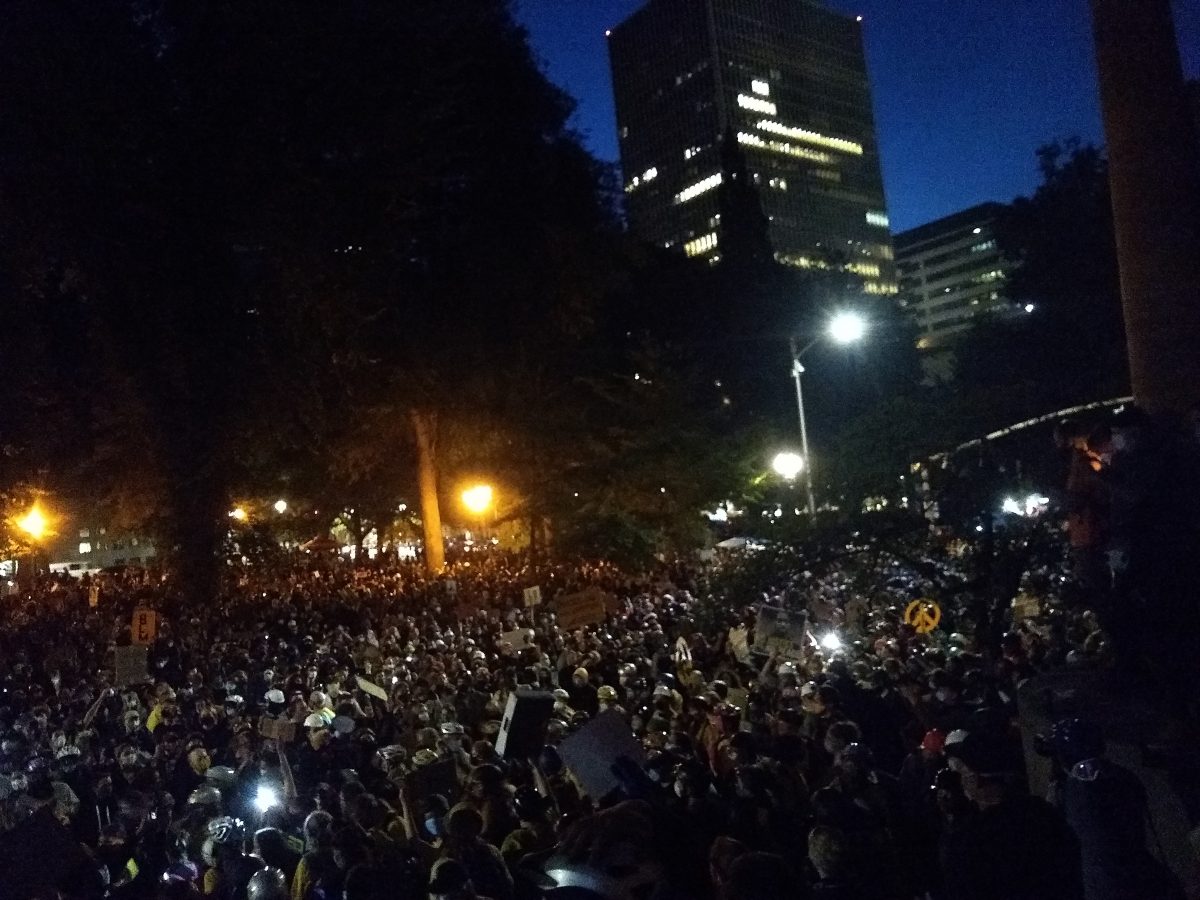 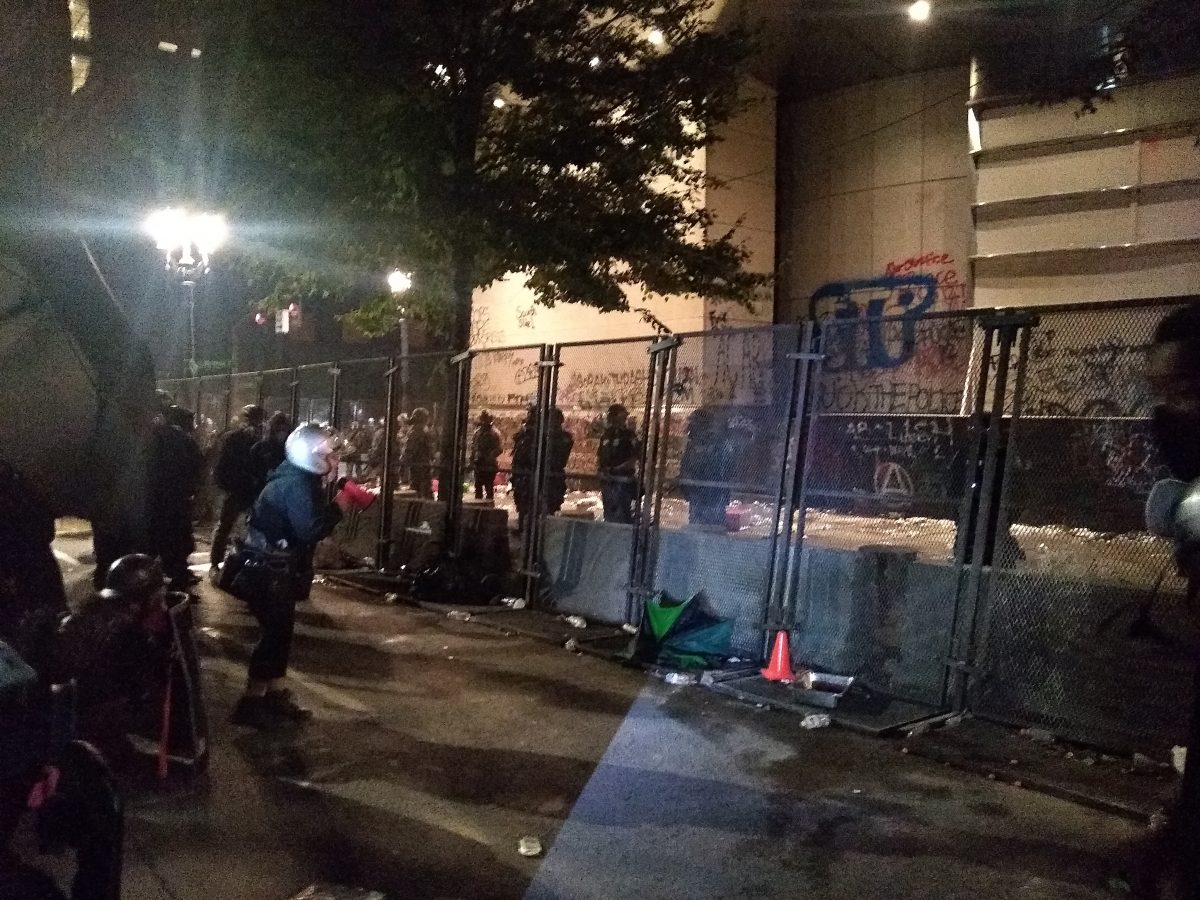 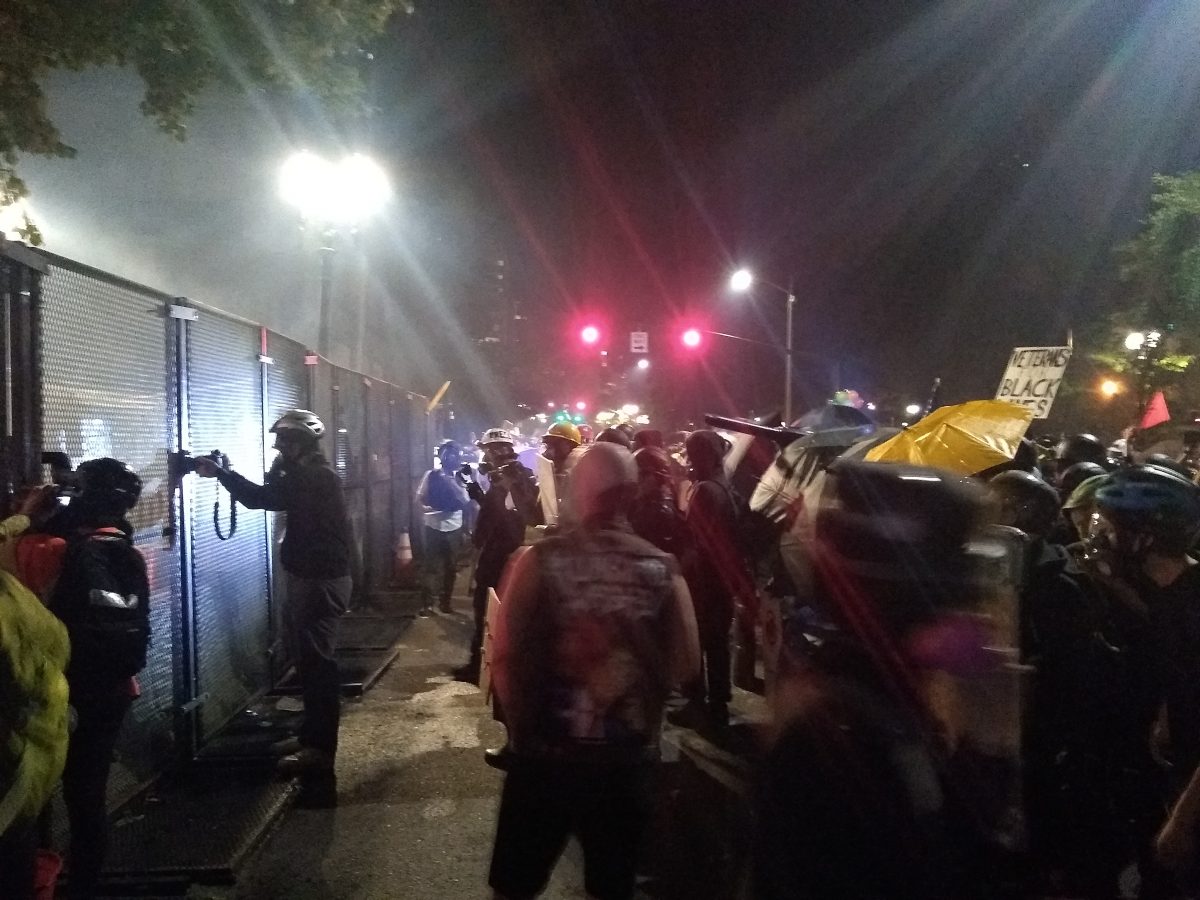 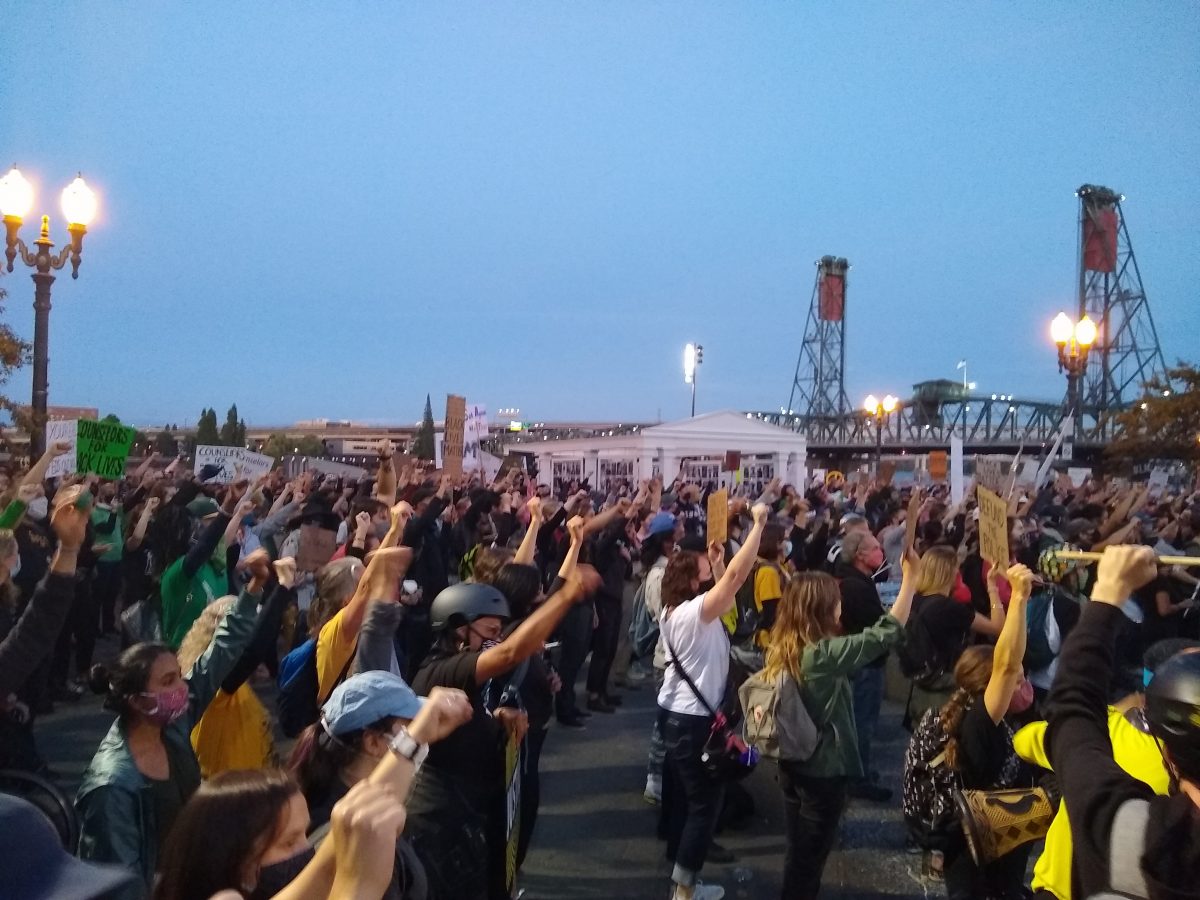 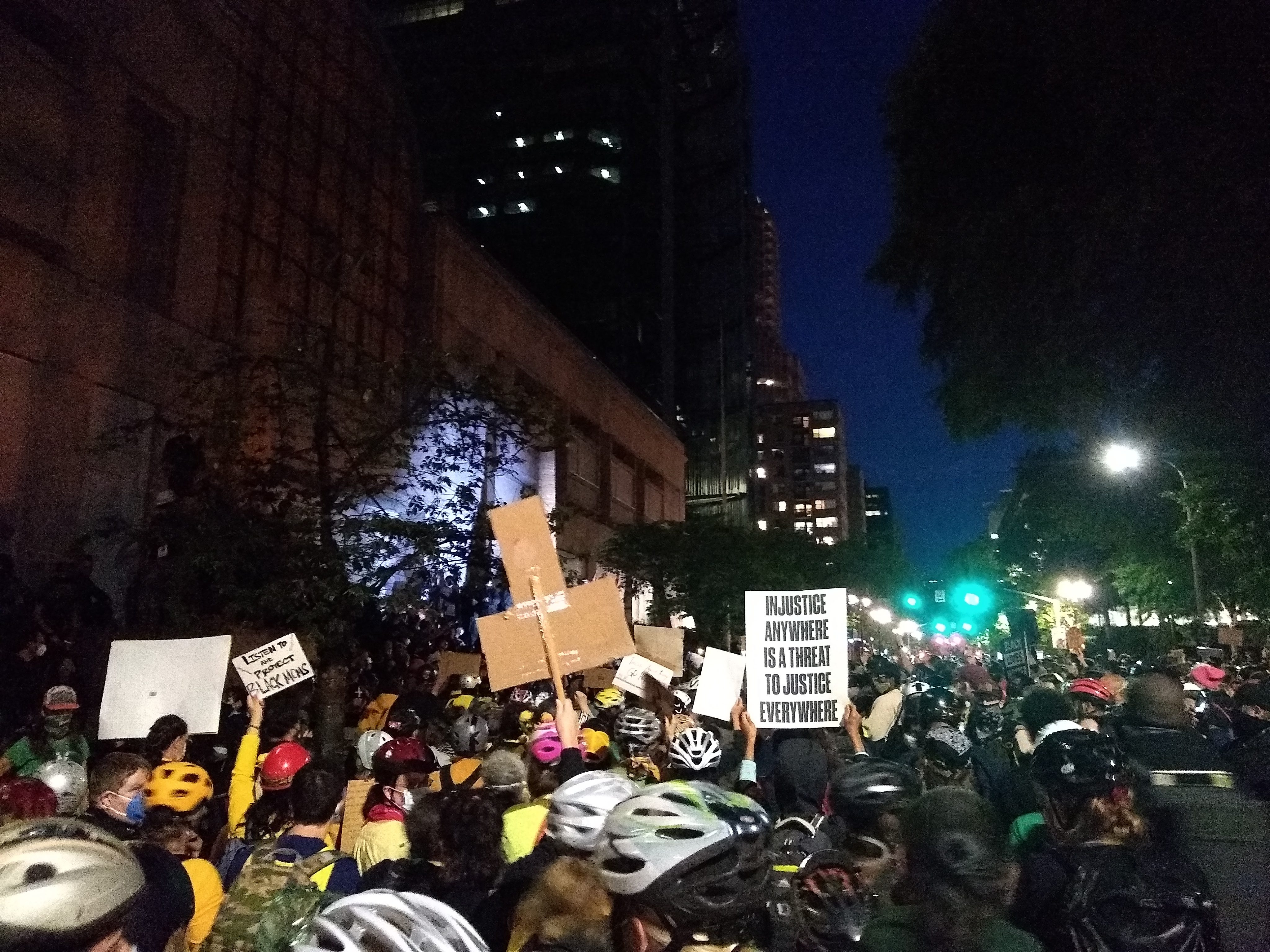 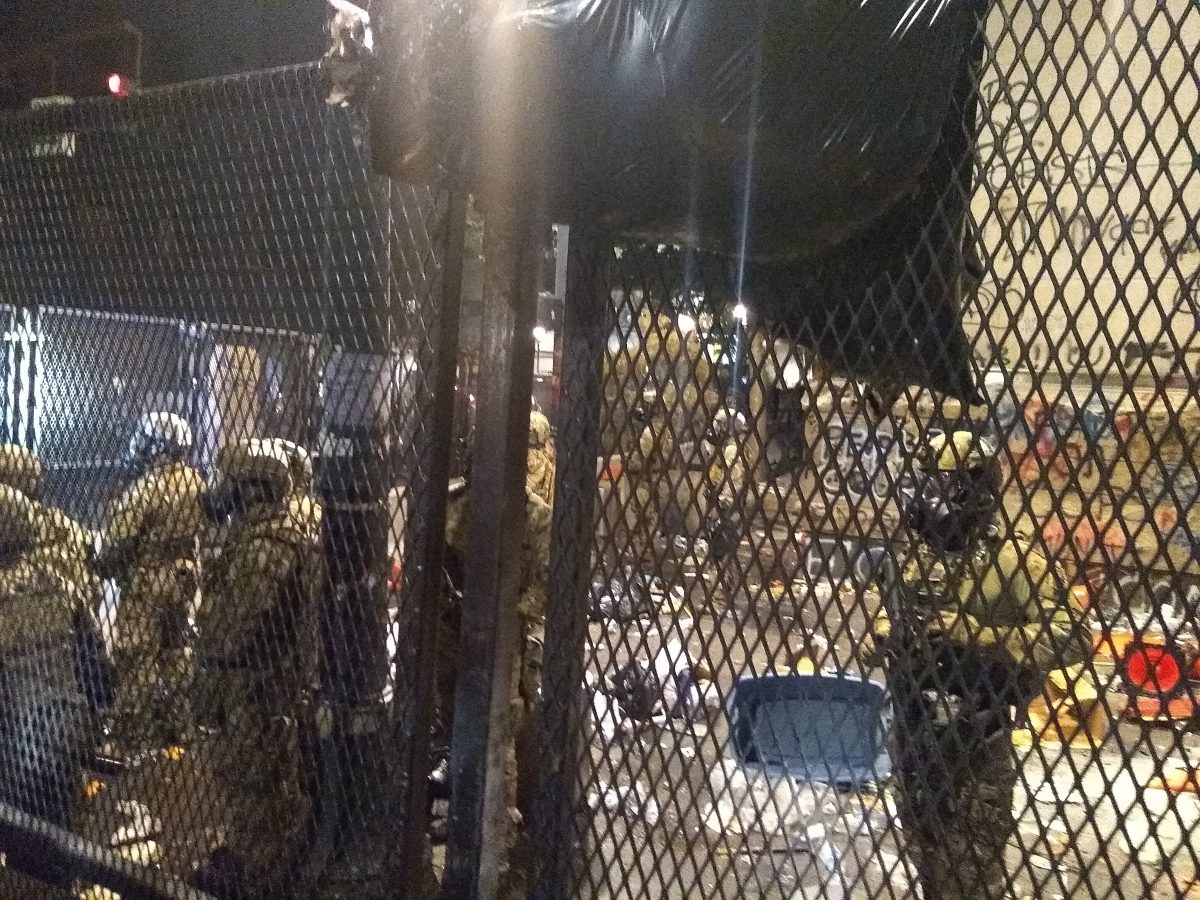 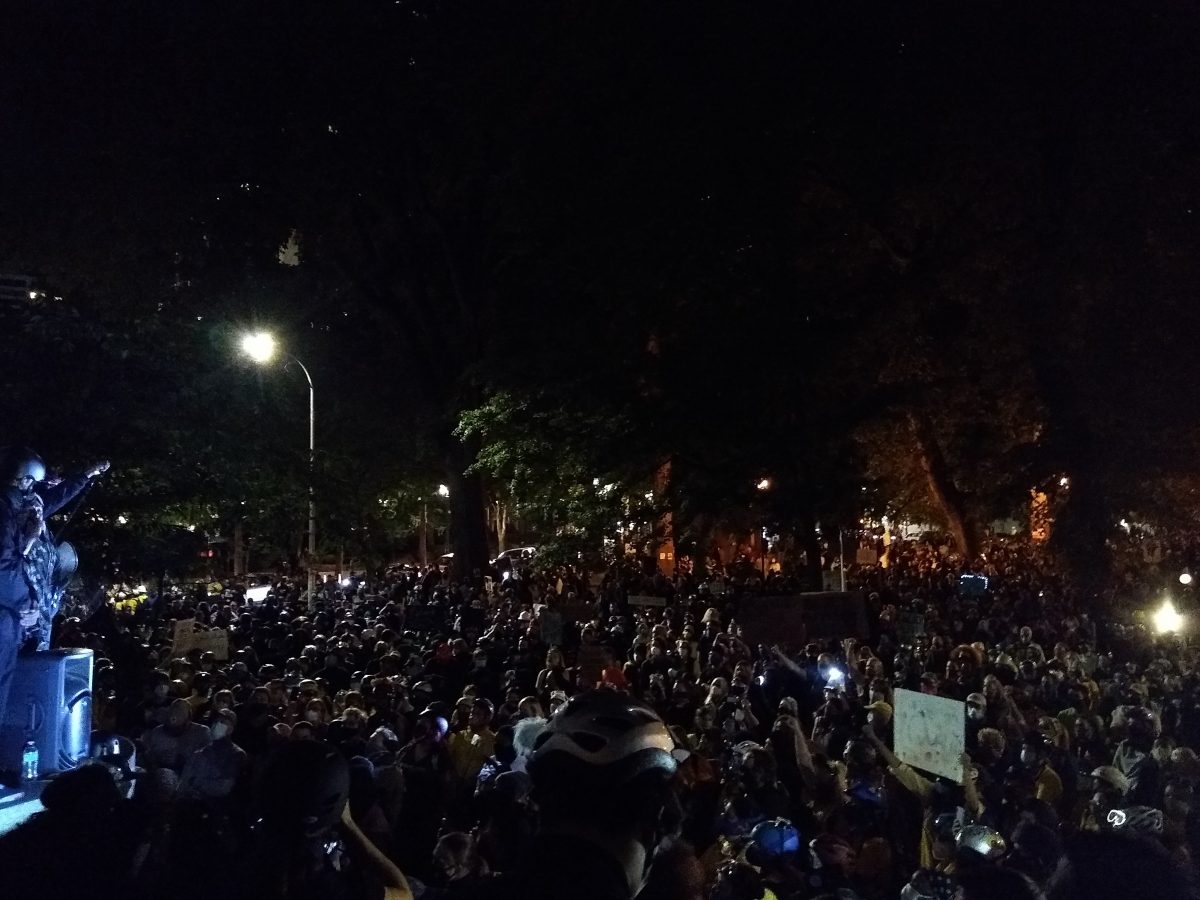 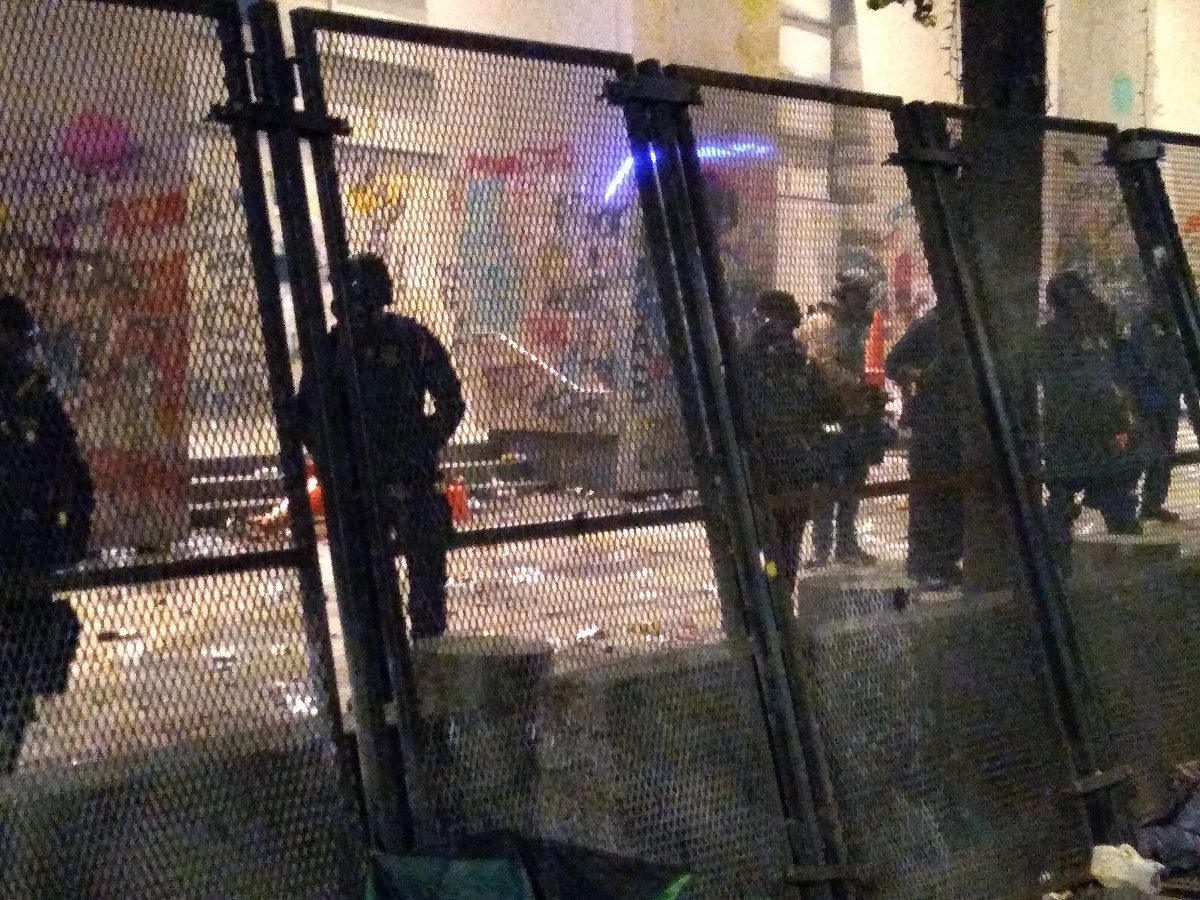 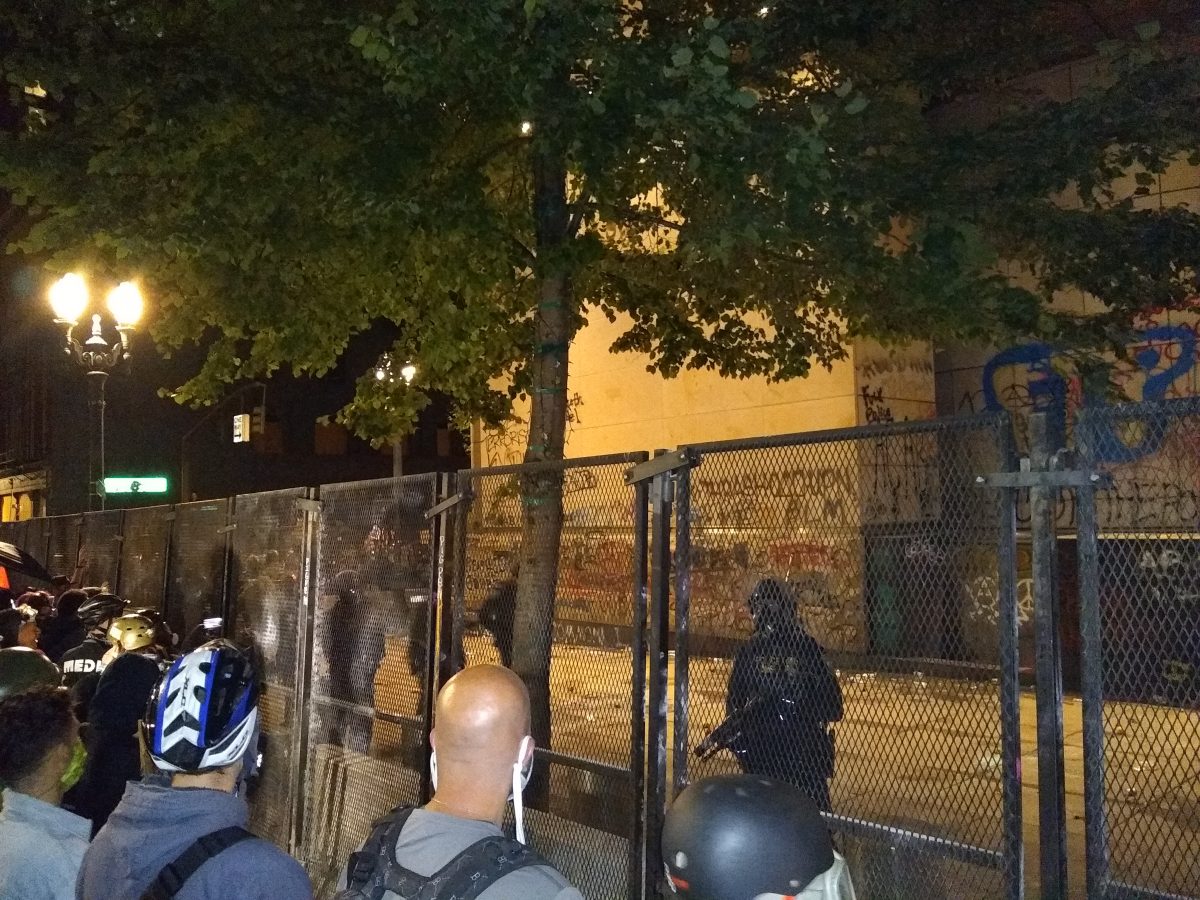 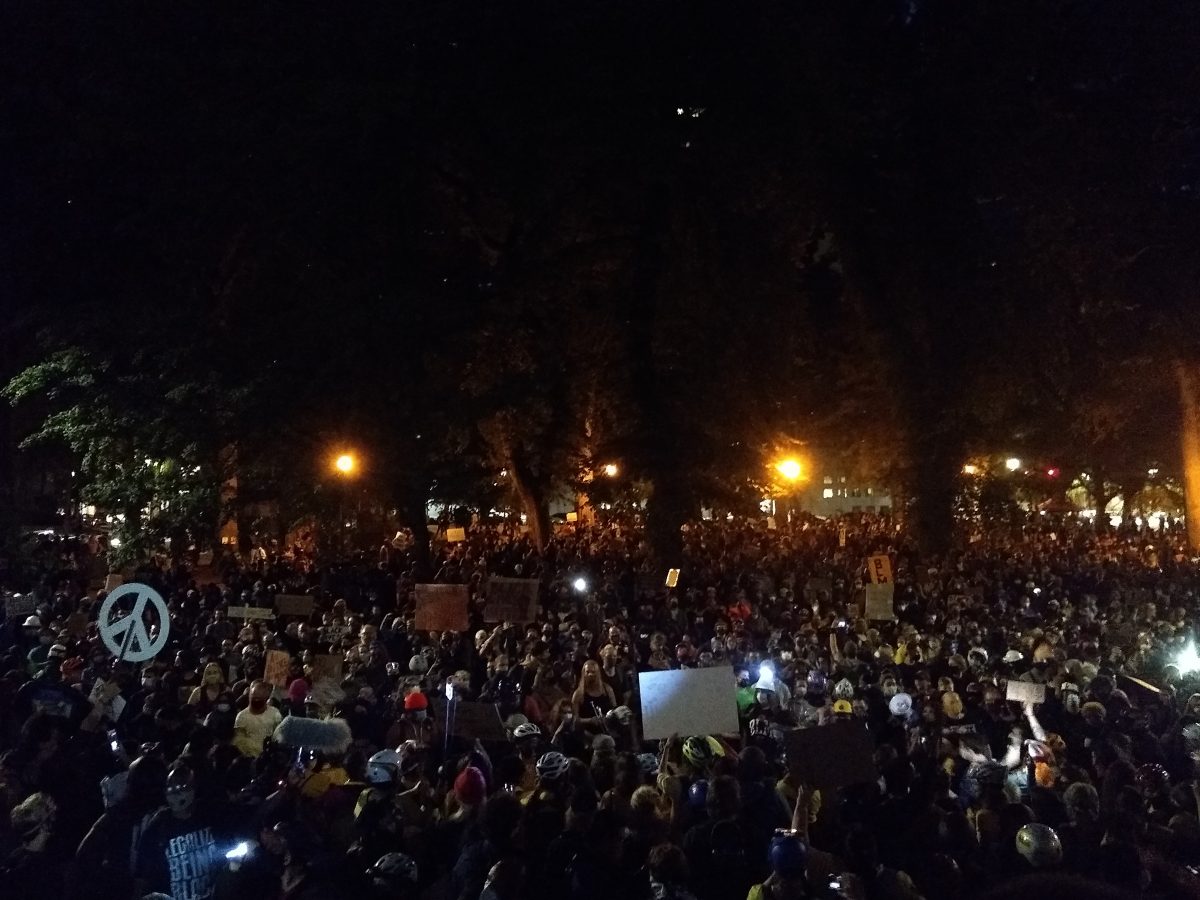