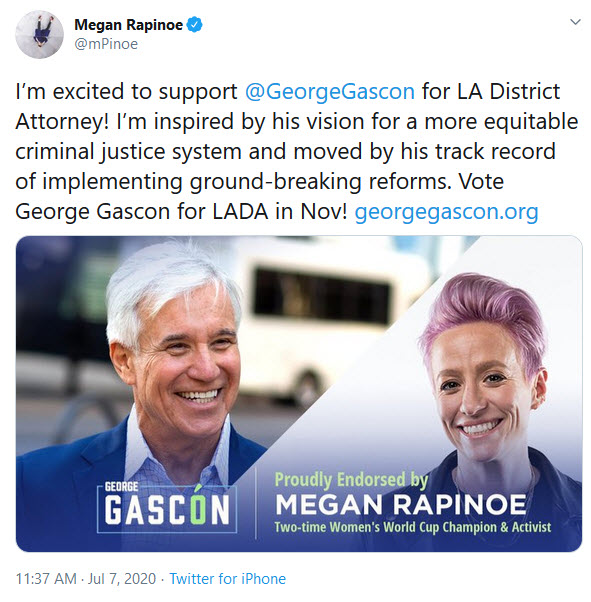 In 2019, Gascón announced his campaign for Los Angeles County District Attorney, and after incumbent DA Jackie Lacy failed to garner over 50 percent of the vote this March, it set up a runoff race against Gascón in November. The winner in November will take the LA County DA seat.

Gascón, an immigrant and veteran, has a unique history of work for the Los Angeles Police Dept. and San Francisco DA, where he was chief prosecutor, filling the prior seat of Senator Kamala Harris. Prior to his time as San Francisco DA, he was a police chief in both San Francisco and Mesa, Arizona.

As the DA for San Francisco Gascón advocated for the end of monetary bail as well as the retroactive decriminalization of marijuana cases through the Adult Use of Marijuana Act. Gascón’s time as a DA in San Francisco earned him a reputation of being an advocate for criminal justice reform.

It comes as no surprise that Megan Rapinoe has decided to offer an endorsement of Gascón. Rapinoe came into the public eye in 2016 when she chose to kneel for the national anthem in solidarity with San Francisco 49ers quarterback, Colin Kaepernick.

Since 2016, Rapinoe has been an involved activist in issues ranging from criminal justice reform to LGBT+ rights. As a native of California, Rapinoe is active in local and state politics.

Rapinoe, whose social media following has grown rapidly since the team’s World Championship win in 2019, has recently been using her platform to advocate for causes related to social justice and

In the past month, Rapinoe joined live stream conversations with Black and queer activists fighting for police reform and the Black Lives Matter movement. At 2.2 million followers on Instagram (as of July 7, 2020), Rapinoe’s influence is considered very strong and expected to influence voters in Gascón’s upcoming runoff election.

“George Gascón has been a longtime advocate and proven leader in criminal justice reform. I’m inspired by his vision of a legal system that serves all Angelenos and moved by his record of implementing ground-breaking reforms to reduce racial disparities in the system,” said Rapinoe.

“As our nation continues to reckon with institutionalized racism, especially the impact of the criminal justice system, I know that George will bring much-needed change to Los Angeles county in pursuit of a more just system,” added Rapinoe.

Gascón is running on a platform almost entirely focused on criminal justice reform. Some of his main policy focuses listed on his campaign website include addressing police violence, eliminating the death penalty in California, and ending the use of monetary bail. His goal for the justice system is to “modernize it,” he maintains.

With years of experience, Gascón may be qualified to do just that, according to political pundits. However, when he was San Francisco DA, he successfully pushed for police accountability—but received criticism when he failed to charge police in fatal shooting incidents.

Despite that, Gascón’s focus on reforming the criminal justice system has garnered an endorsement from Black Lives Matter co-founder Patrisse Cullors, as well as prominent politicians and justice reform advocates such as Elizabeth Warren and Bernie Sanders.

San Francisco District Attorney Chesa Boudin, who ran on a similar platform to Gascón before taking the seat in 2019, also endorses Gascón.

Rapinoe joins other celebrities in endorsing Gascón, such as actress Patricia Arquette and musician John Legend.