One of the biggest complaints about the University Commons project has been “size, scale, and height of the project.”  Critics have a point here—the project is projected to have three stories of parking with four stories of residential on top.

But the impact of that height might be overstated, as I will attempt to show.

According to the staff report: “The new mixed use building would stretch across the rear portion of the property and would be up to 80 feet tall with as many as 7 levels.”

Staff acknowledges that this would be larger and taller than the surrounding development, which is largely three- or four-story apartments mixed with low-density development and low-rise buildings.

However, as I have pointed out: “The Davis Live Project, which is nearby and currently under construction, is of a similar height with 7 stories.”

Critics, such as Eileen Samitz, disagree with this characterization.  She noted that one difference is that Davis Live is only a single building on a small parcel.

She writes in a comment on the Vanguard that “studies were done to assure that there were no shadowing or privacy issues, and it was designed accordingly.”

On the other hand, she points out, “This ‘University Commons’ project, in contrast, is the equivalent of nine or ten 7-story buildings lined up like a wall and even longer than the wall effect of Sterling Apartments on 5th Street as well as a few stories taller.”

She continues: “What about the enormous shadow that this monolithic building will cast on nearby homes? I guess adding solar will not be an option for nearby houses, no less the privacy issues expected since this U-Mall project is enormous horizontally, as well as vertically. So yes, it is far too big and out of scale.”

While a large percentage of the public commenters supported the project, Councilmember Will Arnold noted, “Folks called it a seven-story wall. It’s hard to argue with that.”

Certainly, this CGI (computer generated image) of the proposal is imposing.

I have seen ideas to move it more toward Russell and have suggested moving the project forward and putting the parking garage behind it.

But the reality is that the actual visual impact of the development is going to be far less than critics believe.

The biggest factor is that people underestimate how rapidly vertical impact is diminished by horizontal spacing.  I will discuss this point shortly.

But first, understand that the buildings most immediately surrounding it are in fact commercial or apartments.  You have the University Court across the street on Sycamore, the Davis Chinese Christian Church across the street on Anderson.  Behind it you have the Sycamore Lane Apartments and also the Davis Medical Center.  If you go up Hawthorn Lane, you hit the Episcopal Church and the STEAC center.  You have to get all the way up to Mulberry Lane before you hit single-family homes with a rear view of the project.

According to the city, those are 500 feet of horizontal distance away.

It would probably serve the developers and community well if they want to do some sort of computer simulation to show what the visual impact of the height is likely to be, depending on the vantage point.

This is what Trackside originally did.

Back in July of 2015, I went out to the site and took photos of the 4th and G parking structure.  The parking structure at the high point goes to about 72 feet according to my discussion with the Trackside developers at the time.  I grant that this did not show the impact of the full structure, but it gives everyone an idea of how quickly the impact fades. 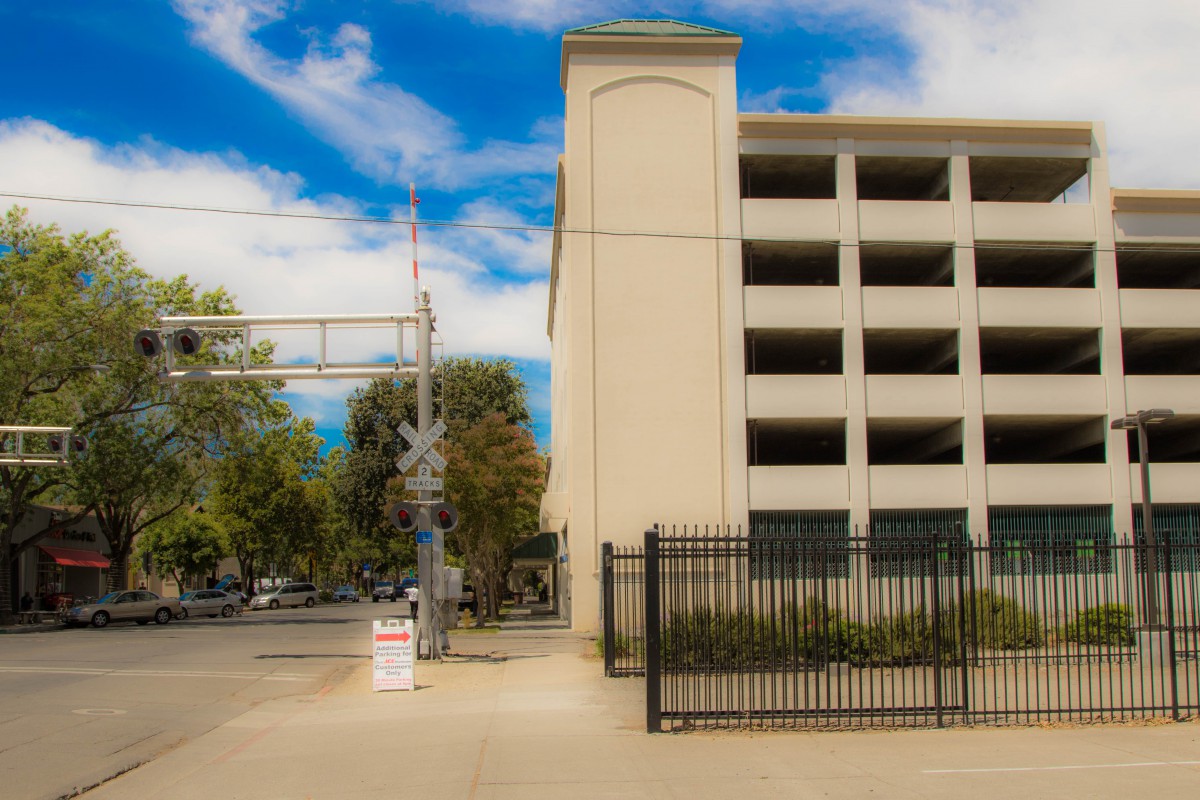 But here is what happens when you get just a block away from the structure – this is taken from the far corner of I and 4th attempts to show a limited impact of a tall building for most neighbors.

Notice that at this point I have to shoot under the tree to get the structure insight and if I move down the block, it would be largely blocked by existing housing.

At 500 feet (probably twice the distance from this photo) with rows of apartment buildings, residents won’t even see it.  The only people who are going to see the building itself are going to be living in apartments – and they will most likely never experience the change of circumstances.

The biggest impacts will be from Russell, but even that impact will be mitigated by how far the structure is set back from the street.  The impact of Sterling is going to be larger because it is right on the street whereas this will be set back a good distance from Russell.  The other impacts will be on Sycamore and Anderson – that will have an impact on the street – but not from a lot of residents in their homes and moreover, the side impacts will not be the length of the “wall” but simply of the side profile.

In short, this “Wall” concept is not going to impact anyone living to the north of the project in single-family homes – they won’t even see the project.

23 thoughts on “Sunday Commentary: The University Commons ‘Wall’ Impact Has Been Greatly Overstated”