There are no guarantees in Davis politics — Nishi learned that in 2016 when a unanimous vote by the Council still ended up with a project rejection.  But the Council and developers lifted the Davis Innovation and Sustainability Campus (DISC) proposal as far as they seemingly could at this time, and now it will be up to the voters to decide — in what figures to be a contentious election on a very crowded ballot.

For all of the complaints that the Council and City were ignoring the recommendations and concerns of Commissions, much of Tuesday was spent addressing the concerns of several — particularly the Natural Resources Commission and Tree Commission.

The applicant — Dan Ramos — took a huge step with a letter delivered to the city early on Tuesday that further addressed many of the concerns raised.  Council then further refined, before passing a motion by Will Arnold and Dan Carson to put the project on the ballot.

The commitments are now locked into the Baseline Project Features … for the most part.

The applicant addressed the issue of “shall” versus “commit.”  They wrote:

“We believe that, from a legal perspective, the terms ‘Developer commits,’ ‘Developer agrees,’ and ‘Developer shall’ in the context of a contract, all equally obligate the party to do whatever

They were further agreeable to modifying all “commitments” in the Development Agreement to say “Developer shall” if that was the desire of the Council.

While the applicant did not get to the 4,000-tree level as the Tree Commission would have liked to see, they committed to 1,800 trees.  One of the issues would have been trying to maximize trees while at the same time fully committing to “maximize the onsite generation of power through the use of photovoltaics.”  In the end they settled on committing to no less than 1,800 trees and modified the language so that if it did interfere with onsite solar generation, they would plant trees offsite.

In a big concession to the NRC, they agreed, “Commercial buildings will be all-electric for the building envelope, i.e. those functions servicing the common areas such as HVAC systems and water heaters.  Natural gas may be provided to the building and made available to meet the needs of individual tenants.”

Councilmember Will Arnold saw this along with the sustainability features and all-renewable commitment as a huge win for the City in pushing the project forward.

The issue of housing again was prominent.  Matt Keasling, attorney for the applicants, indicated that they believed going to off-cycle rentals would be a violation of fair housing laws since its primary purpose would be discriminatory intent.

Nevertheless, the applicants attempted to push forward with a commitment to make onsite housing at DISC, housing that will be “predominantly occupied by employees.”

They wrote the following language: “To further minimize transportation emissions and enhance the active live-work-play environment of the Project, the applicant and the Master Owners Association (MOA) shall ensure an introduction and establishment of a relationship between commercial tenants and the then active builders of on-site housing and/or leasing companies.”

This would include: “Establishing a direct relationship between employers and purveyors of onsite housing will maximize the number of project housing units occupied by individuals working onsite.”

They also plan to provide incentives “to commercial users such as offering a reduction in the annual Master Owners Association (MOA) fee based upon the number of employees living onsite. “

The applicants also opened the door for co-housing and cooperative limited equity housing, but attempted to slam the door on “dormitory-style housing” by limiting housing to micro units, studios, limiting it to three bedrooms or less, and allowing ownership cooperative housing, co-housing, condos and townhomes.

No home will include more than three bedrooms.

Finally they agreed to “participate in and contribute toward an electric shuttle service running weekdays from the AM to PM peaks, connecting commuters from DISC and 2nd Street to UC Davis and the Amtrak station.”

As Councilmember Will Arnold pointed out Mace 25 “is off the table” in that the City makes no commitment to provide an easement and the use for Mace 25 will be determined at a later point, separated from this process and with community discussion and input. 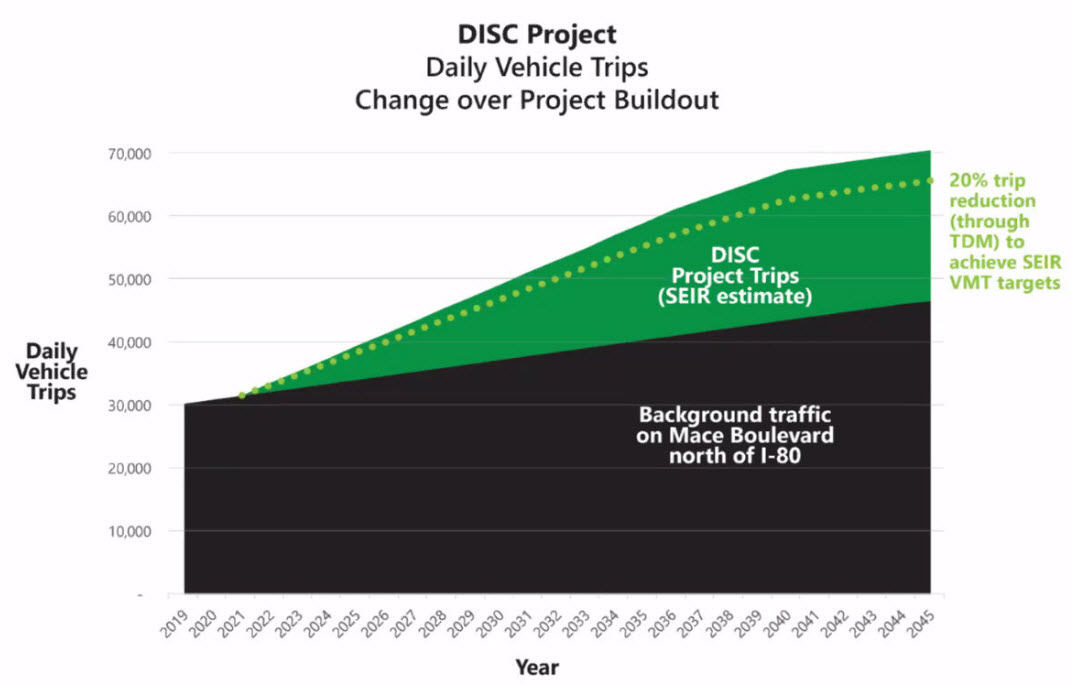 Traffic concerns are definitely significant and unavoidable.  However, Brett Lee pointed out this chart which shows the overall impact of traffic on the Mace corridor with and without the project.

“People are criticizing the project because of the idea that we would be approving a project that generates a substantial amount of traffic while we haven’t been able to solve the problem with the existing level of traffic,” he said acknowledging that a reasonable person would see a disconnect.  “What this slide shows is that there are a few years for us to get the Mace improvements in place to address … the impacts (that) were very real last year.

“It tells us that we do have some time to work with some of our partners to address the traffic challenges today,” he said, as well as the new challenges from the sizable development.

Assistant City Manager Ash Feeney noted that there were $113 million in fees generated by the project, including nearly $80 million in roadway impact fees to offset the impacts of this new development.

Dan Carson adding to the statement of overriding considerations, acknowledged the environmental impacts but also noted that the project was still worthy despite them.

The statement of overriding considerations  document, he explained, “contains four points that are all good and valid points.”  These included: the economic benefits, jobs from construction, additional housing in the city of Davis,  it increases the economic potential of UC Davis and creates long term jobs.

“These are all good, but there is so much more to this project than that,” he said.

“The project includes a vision that has been identified and studied by the city for more than two decades,” he said.  “It positions the city for post-COVID economic recovery stressing the importance of having shovel-ready sites.”

He pointed out it “assists the city in goal of achieving fiscal sustainability as we still have a significant funding gap.”  He added, “It provides a revenue source that will be used to maintain and enhance community amenities.”

In addition to several of Councilmember Carson’s proposals Mayor Gloria Partida added that it sets a precedent for sustainability goals in not just in Davis but our region.

Will Arnold said that this project has been “decades in the making,” noting the work of DSIDE and “other community-led organized attempts to identify ways to diversify our tax base in Davis.”

He noted that when they put revenue measures on the ballot, they are constantly asked “to please find other ways to generate revenue in the City that are not just increasing taxes.

“This is that,” he said.  He noted that this came out of a “community-led process.”

Regarding the community-led process, during the Great Recession, the need was identified to create viable strategies for a strong recovery, and as a result the City led a collaborative effort called Designing a Sustainable Innovative Davis Economy (DSIDE) with partner organizations including UC Davis, the Davis Chamber of Commerce, the Davis Downtown Business Association, the Yolo County Visitors Bureau and many leaders of private industry. Based on a significant amount of stakeholder outreach, this initiative led to several important reports and studies.

Councilmember Arnold also applauded the developer for making “sustainability commitments” including “new commitments that we were able to attain from them over the course of the last two meetings—I will call out the 100 percent renewable and the electric for every building.”

Councilmember Brett Lee noted, “I have a job, I have a house, why would I vote for something that increases traffic and makes the developers rich?”

But he said that attending a Greater Sacramento training session, Barry Broome talked about something that changed his mind.

“He said over the past four years, there have been 200,000 kids—African American kids and Latinx kids—who have left high school in California with no degree,” he said.  “What’s the plan?”  He said, “It then started to make sense.”  He noted that economic development isn’t just about high level professionals—“he’s talking about a broad spectrum of jobs that are available in areas that need those jobs.”

Councilmember Lee noted that those without degrees need access to entry level jobs.

Brett Lee argued “it isn’t a zero sum game” where, if we say no, “it will magically pop up elsewhere.”  He said “in many situations it just doesn’t happen, and so an opportunity is lost.”

The key then is to make sure that even with the impacts, Davis “stays a nice place to live.”  Brett Lee acknowledged that there will be more traffic and other issues, but argued “if we’re smart that money can mitigate impacts.”

Councilmember Lucas Frerichs acknowledged that he struggled in the past with the issue of a business park versus mixed use.

But he came to the conclusion, “I think that a mixed use path is really a superior choice” and acknowledged changing his mind on this issue.

“There is a real need,” he said, for jobs and this type of project in Davis.

Mayor Gloria Partida said, “There is no question that the opportunities that would come out of the project are quite substantial.”

She added that while there is high vetting in Davis and standards that will not be asked for anywhere else in the state, the “opportunities come at a cost.”  That cost she said is that “traffic will increase” and “the flavor of our city will change some.

“That is the biggest concern to a lot of people,” she said, but argued that the overall benefits were worth it.

The council approved the motion on a 5-0 vote.