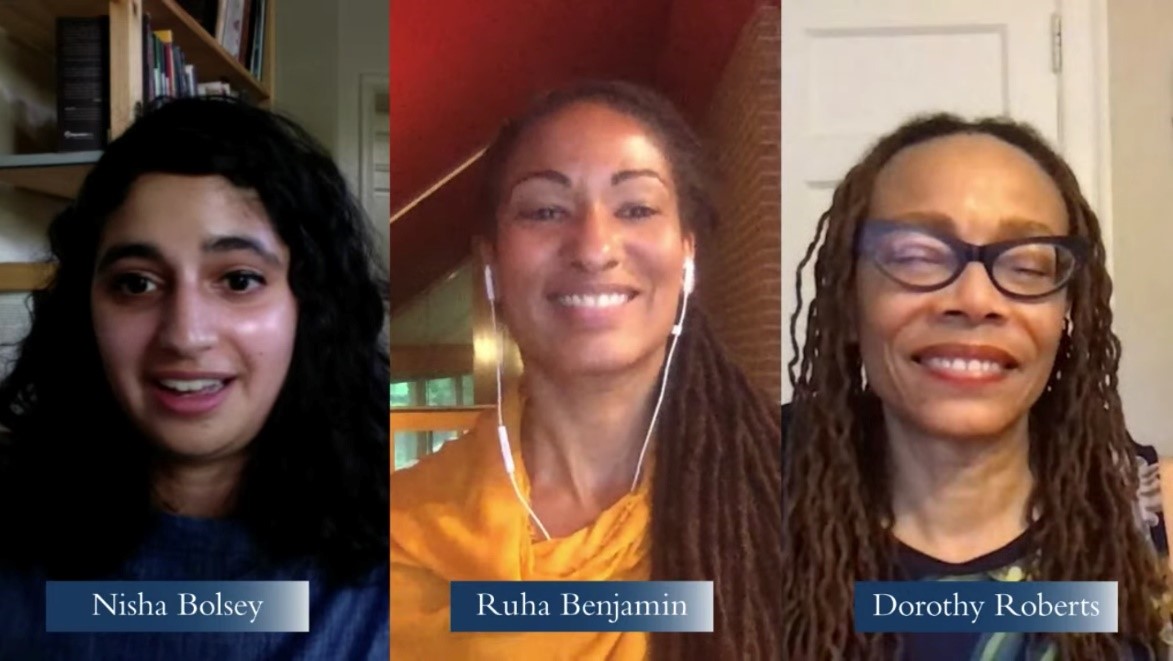 Renowned scholars Dr. Ruha Benjamin and Dr. Dorothy Roberts—who have devoted their impressive careers to focus on issues like health, technology, and social justice—in a livestream webinar Wednesday discussed today’s reality of policing in the U.S., and urge new generations to reimagine systems and institutions in a way that uplifts racial minorities.

Haymarket Books, a radical, independent, nonprofit book publisher focused on social change, hosted an online event, entitled “Policing Without the Police: Race, Technology, and the New Jim Crow.”  This event is the most recent addition to the publisher’s social and economic justice series, “Learning Together (while staying apart)”—which was developed as a result of the coronavirus crisis.

The 90-minute discussion focused especially on the role technology plays in disproportionately policing racial minorities through a variety of institutions.

“Racism has always been about predicting. Prediction is a way of maintaining a racist order,” Roberts said about the predictive algorithms police use to assess risk, adding that some of these risk assessment tools are used to predict future behavior by defendants and incarcerated persons in order to assist judges, parole officers, and other officials with decision-making.

“Law enforcement databases and algorithms are already predicting that toddlers are going to be gang members,” she added.

While a common narrative in support of using these algorithms in the criminal justice system is that computers can make unbiased predictions and decisions, Roberts and Benjamin reminded viewers that technology does not have an independent mind.

“Technology is the product of human agency,” Benjamin stated.  She explained how those who create algorithms and other designs incorporate their own biases, motives, and ideals into them.

“Racism gets built into the algorithms of law enforcement without being explicit,” added Roberts. “Risk assessment is no longer about determining whether an individual is going to do something. It is about whether they belong to a population they want to manage.”

The scholars also discussed policing and controlling communities outside of law enforcement tactics.

“With targeting marketing, the same way you can be included, you can also be excluded,” Benjamin said. She provided an example of how house developers can post ads on Facebook and choose if they do not want certain groups such as Black people or Latinx people to see it in order to maintain a neighborhood the way they desire.

“It’s not a ‘whites-only’ sign but it plays the same role,” she said.

Benjamin categorizes designs like this as part of the “New Jim Code”, a concept that explores a range of discriminatory designs in today’s modern technology which amplify racial hierarchies. This concept is discussed in greater detail in her most recent book, Race After Technology: Abolitionist Tools for the New Jim Crow.

Roberts also argued that the child welfare system in the U.S. is an institution of policing individuals, especially Black and indigenous people. According to Child Welfare Information Gateway, Black or African-American children made up 23 percent of the foster care population, while Black people only make up about 13 percent of the country’s population.

She stated that this system was built on “ideological foundations of the state policing of Black mothers.

“Policies pretend that it is Black mothers who are the cause,” said Roberts, explaining how parents are blamed and families are destroyed instead of addressing and ending the structural inequalities that are actually harming children. She maintained that monitoring families and forcefully taking children is just another way policing occurs.

As a foster care abolitionist, Roberts warned about the current political movement to abolish or defund the police.

“We need to be careful not to take the resources from one oppressive institution to another. Police and Child Protective Services work hand in hand.” She claims that both institutions destroy families and communities, so people must work collectively to build a new society that supports rather than harms.

“Getting rid of child welfare isn’t bad. We can create a different way of meeting people’s needs that doesn’t involve taking children away and locking them up or locking up parents,” she insisted.

Benjamin also warned about the danger of blindly relocating funds to institutions like schools, which are another carceral system. This idea refers to the school-to-prison pipeline which the ACLU describes as “wherein children are funneled out of public school and into the juvenile and criminal justice system.”

“It’s not about shifting money around, it’s about reimagining,” Benjamin clarified. “Imagination is a terrain of struggle. Many people are forced to live inside someone else’s imagination.”

Both speakers also educated viewers on the role community members play in policing without the police.

“It’s not just a top-down process. It’s also about how we use apps. How we perpetuate policing, how we are deputies of the police,” Benjamin said. A recent example of this is how photos from protests that are posted on social media can be used to identify protestors and put them at risk of retaliation from governmental forces.

When asked about what individuals can do to fight against policing and oppressive institutions, Benjamin responded to “know your history…Understand the hierarchy of knowledge and academia that allows people to graduate without any education of history and sociology.”

She also challenged viewers to shift their own imagination in a way that values small actions, as those are the ones that lead to building worlds.