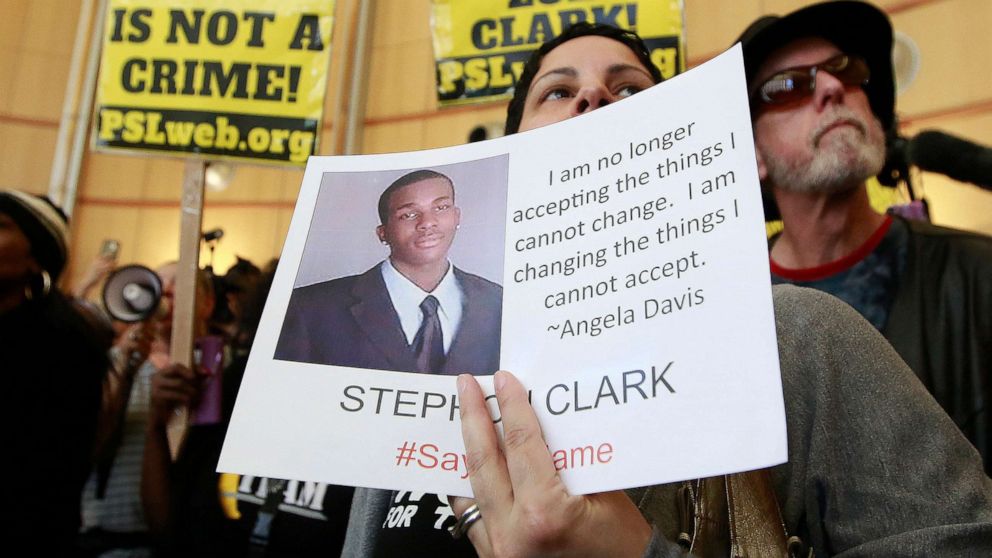 The NFL ran a public service announcement about the killing of Stephon Clark as part of their anti-racism campaign. The PSA is narrated by Stephon’s mother, Se’Quette Clark.

Among other things, it notes that Clark’s death led to the passing of AB 392, which is California’s new use-of-force guidelines that put it among the forefront in the nation in terms of being the toughest in holding officers accountable.

In the PSA, she said, “As a mother, I can’t help the immense feeling of pride, knowing my son’s life will affect so many people for generations to come.”

“With sincerity and gratitude, I would like to thank Roc Nation and the NFL for choosing to honor the life of my son, Stephon Clark, who was unjustly stolen from us on March 18, 2018, by Sac PD officers Terrence Mercadal and Jared Robinet who are still employed and patrolling our streets,” Se’Quette Clark said in a news release last week.

“What the world lost was a living example of someone doing the right thing in their day-to-day life,” Se’Quette Clark says on the video.

So of course the California District Attorneys Association, that bastion of progressivism, is pushing back and asking the league to pull the video because they say it “misrepresents the facts” about Clark’s March 2018 shooting death at the hands of Sacramento police.

El Dorado County DA Vern Pierrson, the President of the CDAA and a strong opponent of reform efforts, said in part that he committed several crimes including car burglary, vandalism and an attempted residential burglary. Whenever someone gets shot and killed by police, their crimes are always used as justification—as though the fact that someone commits a crime justifies the

In a news conference on Wednesday, the family pushed back, disagreeing with the letter and saying it continues to “assassinate the character” of Stephon Clark.

“The District Attorney’s Office is trying to make a mockery and discredit my brother’s legacy,” Stevante Clark said. “This is not something that is new to us.

“It’s been a smear campaign from the start,” he added.

“Stephon’s PSA, his public service announcement, is the fifth one the NFL and Roc Nation have put out,” Se’Quette Clark said. “And in the history of them putting these out, no other district attorneys have contradicted, or attempted to assassinate, or have taken down these PSAs. What this shows to me is that they’re afraid of the truth coming out.”

We see this all the time. DAs and police departments consistently attempt to justify their actions through character association—bringing in past misdeeds or crimes as though that justifies the use of deadly force.

But what really caught my attention was this: “Mr. Clark was running from officers when he entered the backyard of his grandmother and took a shooting stance and advanced on officers who believed he had a gun.”

Remember the statement by the Police Officer’s Association in Vallejo on the death of Sean Monterrosa.

The POA, led by President Micheal Nichelini, put out a press release dated June 5 in which they describe Monterrosa as “attempting to flee with others in a vehicle” and then, instead of continuing his escape, he “chose to engage the responding officers.”

As described by the POA: “Mr. Monterrosa abruptly pivoted back around toward the officers, crouched into a tactical shooting position, and grabbed an object in his waistband that appeared to be the butt of a handgun. At no time did Mr. Monterrosa make any movements consistent with surrendering. Fearing that Mr. Monterrosa was about to open fire on the officers in the vehicle, the officer was forced to fire multiple rounds through his windshield.”

In the Stephon Clark case, he had a cell phone. In Sean Monterrosa’s case he had a hammer. In neither case did they have a weapon with which to take a shooting position.

Clearly no rational person when facing the cops without an actual weapon is going to take a shooting stance.

Now perhaps it is true that the police didn’t know that they weren’t armed with guns.

But the question we must ask is whether the police are misreading these movements, or offering up a questionable ad hoc justification for using lethal force?

As John Burris pointed out, the POA position “doesn’t make any sense. As he pointed out, “he didn’t have anything,” so why would he grab an object in his waistband that was not a firearm and simulate as though he were about to open fire?

Share:
Tags:California District Attorneys AssociationSean MonterrosaStephon ClakVern Pierrson
Previous : Davis Announces Beginning of Furlough Days for Employees Due to COVID Budget Cuts
Next : Savit’s Victory in Michigan, Gardner in St. Louis, Are the Latest in the String of Wins for Reformer DAs

5 thoughts on “Commentary: How Does One Take a Shooting Stance When You Have No Weapon?”