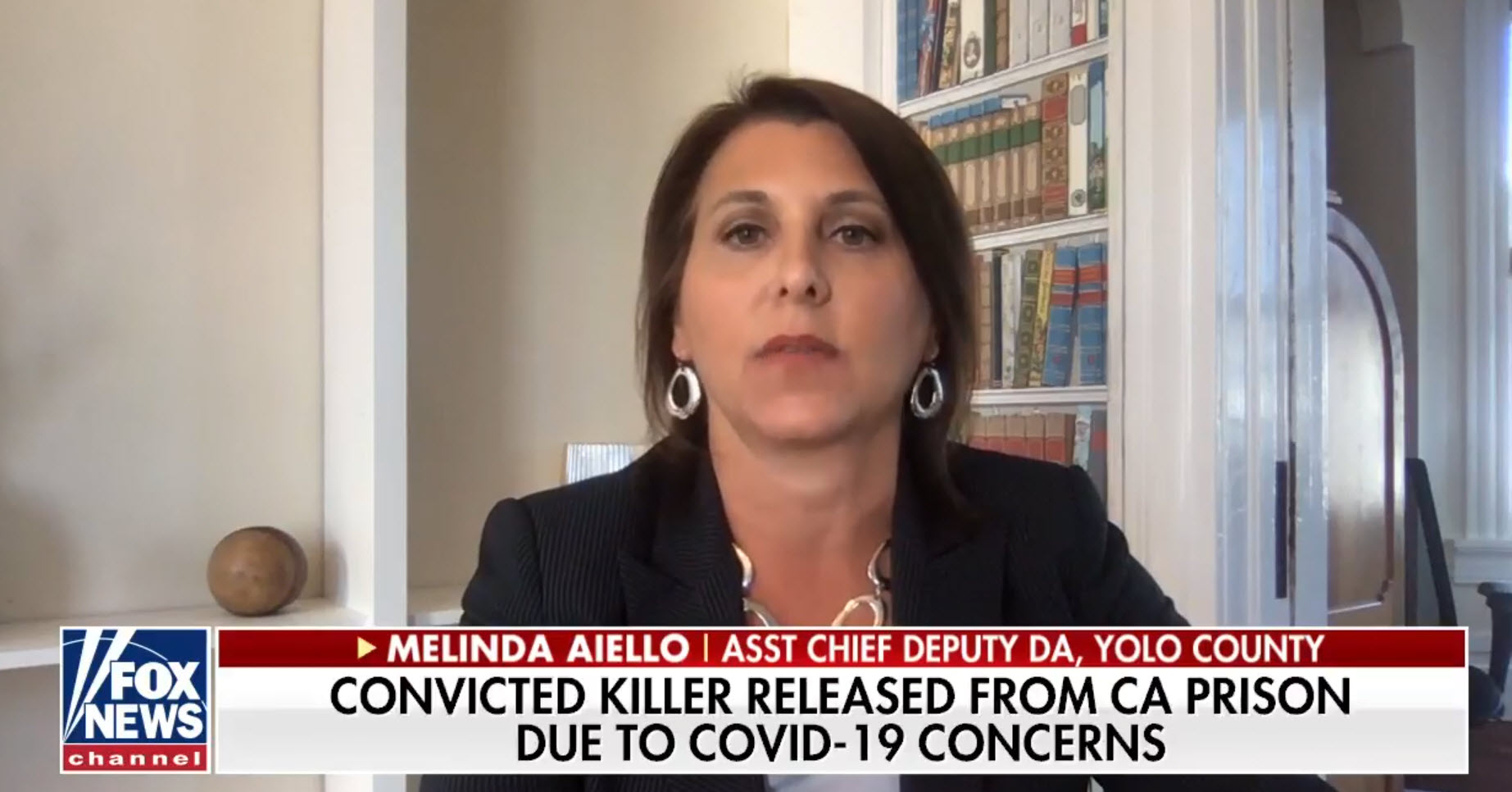 Remember when the Yolo DA was touted by local media as being one of the most progressive in the state? That seemed like just two years ago. But now Assistant Chief Deputy DA Melinda Aiello once again is taking to Fox News to push, not for progressive reform, but for traditional tough-on-crime measures and policies.

Earlier this year, she was on there complaining about the Judicial Counsel’s Zero Bail policy, now she is back after a state parole board released a convicted killer out of Yolo County.

That’s Fox News as in the conservative cable news network, guardians for the Trump Presidency, and pretty much the antithesis of anything resembling progressive prosecution.

Terebea Williams, 44 now, was convicted in 2001 of first-degree murder, use of a firearm, carjacking, and kidnapping in the death of 23-year-old Kevin Ruska in Davis. The sister is angry and wanting justice for her little brother.

What we don’t know from this case of course is what has happened over the past 19 years that Williams has served in prison. The crime took place in 1998, and she was just 22.

When we interviewed Chesa Boudin’s office a few weeks ago, he had designated a Deputy DA to review case files at places like San Quentin to see who would be a good candidate for release under PC section 1170(d). That office had at the time we talked with them resentenced at least 15 individuals—many of them who had been sentenced to long sentences and had served years in prison.

On the other hand, the Yolo County DA’s office has only agreed to release a few and has fought pretty much every single parole request.

This week, there was Melinda Aiello on Fox News.

She told them that “as a career prosecutor, I cannot emphasize enough how horrific of a conversation I had to have with Dena’s family to deliver them the shocking news that Terebea Williams was going to be released and that they had absolutely no say in the matter.”

Fox then quotes from Californians for Safety and Justice, calling it “kind of an odd name for a group that really is kind of open to letting these people out of jails.”

The group said, “We’re glad the governor is taking action to release more people. This is absolutely critical for the health and safety of every Californian. Too many people are incarcerated for too long and facilities that spread poor health. Supporting the health and safety of all Californians means releasing people unnecessarily incarcerated and transforming our justice system.”

Aiello responded, “I agree. And I want to emphasize that as prosecutors were absolutely appalled at the lack of transparency at the release decisions that are being made on the state level, CDCR has already released over 10,000 inmates who were convicted and sentenced to what we call a determinant term. They had a determined outdate.”

But she added that “now CDCR has expanded their efforts, and they’re including violent criminals, including murderers, and that’s the situation that we have here with Terebea Williams.”

The host then quoted Melinda Aiello on the zero bail policy where she wrote, “As a society we can never lose sight of the fact that nearly every crime, even those dubbed ‘low level’, has a victim. Simply dismissing a crime as low levels diminishes the very real and life altering impact that these crimes have on victims lives.”

Compare the Yolo DA to San Francisco’s prosecutor who has been working hard to follow the guidelines of public health officials who have warned the state that they need to reduce the prison population in half.

In a recent Op-Ed, Boudin along with Miriam Krinsky of Fair and Just Prosecution noted, “Being confined in a prison or jail should not be a death sentence. Yet, in the context of COVID-19 that is exactly what it has become for far too many.”

They added that in addition to releasing those who are elderly and within six months of their release or otherwise medically vulnerable, “They can accelerate release for individuals already found suitable for parole.”

A parole board has found Williams suitable and the governor signed off on it. Everyone else is flying off the handle with less than full information here.

It wasn’t that long ago when local media and people in Jeff Reisig’s office were claiming he was among the most progressive prosecutors in the state.

His chief deputy in 2018 wrote, “Reisig is a visionary who is constantly looking for innovative and progressive ways to best serve the public.”

The local paper in endorsing his reelection—that he narrowly won in 2018, wrote, “Despite efforts by those opposed to him to portray him as something that he is not, Reisig is, in fact, one of the most progressive district attorneys in the state.”

But whenever reforms seem to come up, this progressive who is being portrayed as “something that he is not” always seems to side with the status quo, with tough-on-crime approaches that have failed this state and failed this nation and left us with the most incarcerated population in the world.

Now his Assistant Chief Deputy is coming on Fox News to defend their opposition to early releases and zero bail during the pandemic.