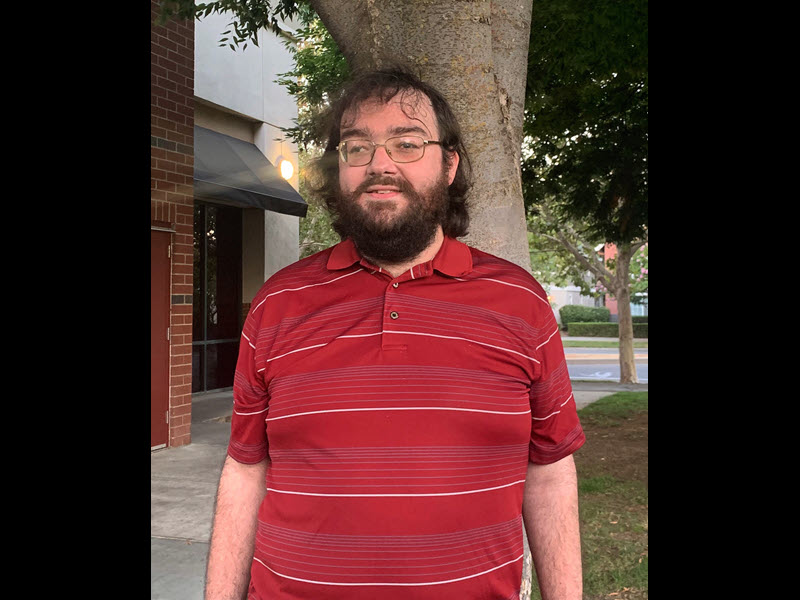 Connor Gorman has been a fixture during public comment at City Council meetings or, as he put it, “involved in local political things for quite awhile”—including labor organizing through UC Davis worker’s union, direct action organizing, and event city politics through the “No DAPL” movement where activists successfully pushed the city to divest from Wells Fargo.

“I started going to city (council meetings) more regularly and got invested in it, especially around issues of housing and policing,” he said. He called running for office “a good next step.” He sees this as “a good way to attempt to influence the city’s decision making.”

He hopes to graduate soon but remains very interested in local politics.

“I’m down to stay here and get more involved in that scene in a more formal way through city council if I win in November,” he said.

From physics to labor organizing, he explained, “I have been a leftist for quite a while,” starting in high school and undergrad.

But he came here in September 2013, and went on strike in late November over the contract issue. “I think that was definitely part of it—being involved in a strike from the beginning,” he said. “But I was headed that direction anyway.”

He became a head steward in the student workers union his second year. That involvement got him involved in other groups and other activities as well.

Two big issues for him are policing and housing.

Connor Gorman describes himself in the “PHIMBY” camp. NIMBYs are generally opposed to development, according to Gorman. YIMBY’s are generally supportive of development. PHIMBY, on the other hand, “stands for public housing in my backyard.”

His idea: “We need housing and we need development, but we would like it to really like it to serve our communities, especially the most marginalized in our community.”

First, “We would like to see more direct democratic public projects, especially housing.” He cited things like co-ops and public housing that are “run in a democratic community-oriented way” and not with a private landlord.

But he also acknowledges that in the current society “we are not going to house everyone in democratic public housing,” he said, “when it comes to development, pushing for better projects.” He said, “What the developer usually comes with is not the most they’re willing to give. Generally with enough pressure we can push them to provide more.”

He especially wants that push “around affordability,” which he says he is most concerned with, but “other stuff as well.” Environmental measures in particular.

He is pushing for a separate department of public safety that covers homelessness, substance use and mental health crisis—respite centers as well.

Gorman said, “The idea would be to start redirecting resources from the police department.”

He also wants to end the armored vehicle contract “and redirect the funding to other things as well.”

He wants traffic stops outside of the police department—nor does he want it under public safety.

Homelessness is another big issue—he sees that as an intersection of housing and public safety. He said, “Generally I support a housing first approach where the idea is that you provide people with housing even if they still have other issues to be addressed.” He sees them as more likely to be receptive to those services if they’re housed already.

Finally, the downtown and businesses in general. He wants to look into “commercial rent control” or a vacancy tax. The downtown, he points out, is owned by a few large landowners. A lot of the small businesses in town rent their property.

“Having some kind of rent control for downtown businesses could actually be a way of keeping businesses—especially the smaller, more local ones—in place,” he said.

3 thoughts on “Gorman Talks about His Campaign for City Council”