SAN QUENTIN –– For the past 21 years, Orlando Smith has sat in his prison cell, filling his 250-year-long sentence with art as an illustrative journalist and comic book artist. This year, he got to illustrate the prison’s deadliest villain yet –– San Quentin’s COVID-19 outbreak.

“I wanted to inform the world that California prisons are ill-prepared to deal with any fast-spreading disease,” writes Smith, 53.

San Quentin, which has now claimed 26 lives, was free of the virus before the end of May. When a bus of 121 medically vulnerable men from the California Institution for Men (CIM) transferred there, positive cases immediately started popping up.

Several sources, however, told the San Francisco Chronicle that four of the men bound for San Quentin were already showing symptoms of COVID-19 before getting off the bus.

Within three months, over 2,000 individuals have tested positive for coronavirus in San Quentin –– making up 21% of the total cases in the CDCR facilities.

In one of Smith’s recent comics entitled “COVID-19 versus the Nameless,” he depicts the realities of dealing with the pandemic behind prison walls. Incarcerated persons are sketched in close quarters as COVID-19 particles float about.

“I would love to be in a one-bedroom apartment with Chevron-patterned Oak Floors, a Scavolini Kitchen, and a master bathroom walled in Calacatta Marble –– with my entire living room converted into a drawing studio, but instead I awoke in a 4.5 by 9.5 foot cell to the sound of my cellie taking a piss,” writes Smith back in July. “This is my stark reality. It has its dehumanizing elements.”

Trapped in claustrophobic cells, incarcerated persons are only permitted 30 minutes a week to shower. There are 16 shower heads total –– two feet apart from one another –– for approximately 840 individuals to use. With prison officials continuing to enforce double-ceiling, social distancing, as recommended by the Centers for Disease Control and Prevention, is nearly impossible.

The prison food, which Smith describes as a “Soylent Green-like substance,” is served without face masks and has only worsened in quality since the lockdown. Prison commissary and programming have also come to a halt.

Individuals who feel sick are reluctant to report it to officials out of fear of being sent to Carson, otherwise known as “The Hole,” where prisoners are kept in solitary confinement.

In addition, Smith has failed to receive any treatment after being injured from cleaning chemicals used by “professional cleaners” at the prison.

“This deadly crisis has brought out the best qualities among the population of the incarcerated people –– but double-celling people in a small concrete box is no-doubt a human rights violation. And if not, it sure as hell should be,” writes Smith.

Back in 1997, Smith was sentenced to eight life sentences under California’s Three Strikes Sentencing Law for eight counts of armed robbery. Enacted in 1994, the Three Strikes law gives defendants a prison sentence of 25 years to life if they are convicted of three violent or serious felonies. The law also doubles the prison sentence for people convicted of any California felony who have two prior violent or serious felonies.

Proposition 36, passed by voters in 2012, made significant amendments to California’s Three Strikes Law. Incarcerated individuals sentenced as third strikers under the old law could now appeal to be released early.

With a petition signed by over 500 people, Smith hopes to be granted commutation by Gov. Gavin Newsom as soon as possible. He also asks that the governor give San Quentin prisoners, who are engaged in programs, furloughs –– including those convicted with violent offenses.

During his time in incarceration, Smith has created 63 graphic novels as well as illustrated, written and inked 748 different characters. He produced a “Protest Poster” series for numerous activists and social justice organizations including The Ella Baker Center for Human Rights.

His art, which ranges from discussing social issues to the impact of environmental pollution, has won awards and has been displayed in exhibits across the country.

Smith has donated his art to raise funds for causes such as the “San Quentin Women’s Breast Cancer Cares Program,” and has participated in community arts projects with the Berkeley Art Museum, Southern Exposure Art Gallery in San Francisco and Stanford University.

“Over the long years of incarceration, I’ve witnessed injustice on an unparalleled scale. The devastating and deeply felt impact of America’s Mass Incarceration, which I call the continuation of slavery and the 13th Amendment, confirms in my diverse ideas of creating art, there is always a touch of redemption so that the viewer can discover unexplored thoughts within the details,” writes Smith.

For Smith, the only solution to these deep-rooted issues is group participation.

“I am no longer a danger to the public. I seek to thrive as a mindful citizen, contributing my art. I have a firmness of purpose and that is ‘who you are is what you do, and what you do is who you are,’” Smith says. 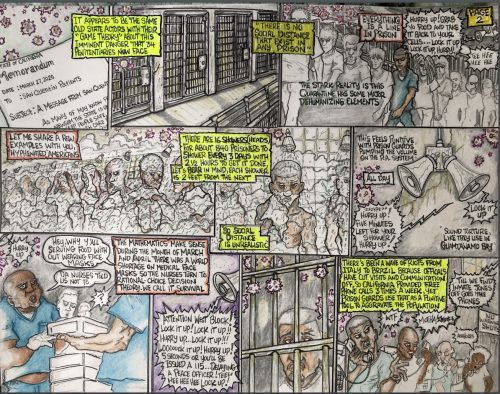 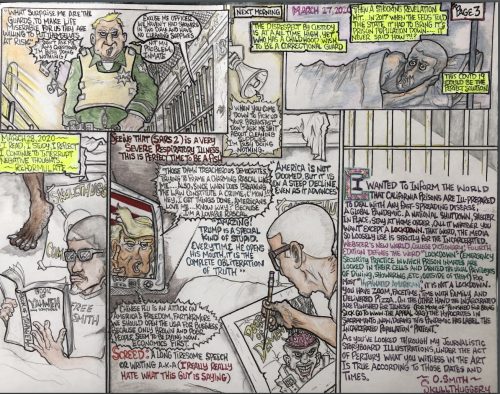 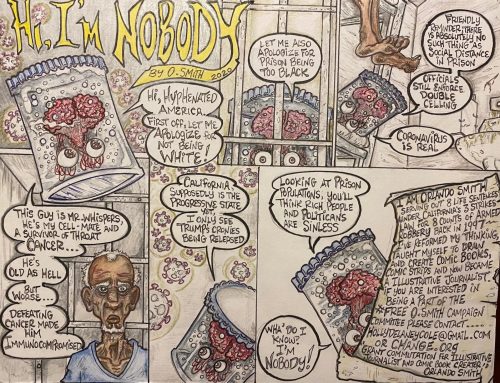