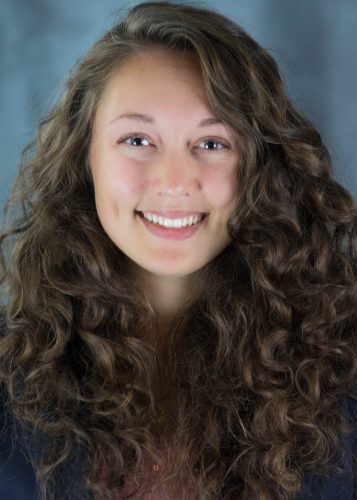 Kelsey Fortune, it is fair to say, is probably the least well known of the four candidates for District 5’s council race.  She is an economics graduate student who moved to Davis in 2013.

She grew up in Wisconsin—a small town of 16,000 people.  She said when she goes back today, everyone still knows her.  Kelsey Fortune plans to finish her degree in December.

She said, “It’s very Davis of me, I am focused on transportation, the economy and the environment.”  She said, “I fit right in, in this community.

“I came to Davis for school but really fell in love with the community,” she said.  She has been working with a local non-profit, Purple Tree Cafe, which creates employment for people with disabilities as well as connects people with disabilities to the broader community through food, art and music.  She explained that this is “a big reason why I would like to stay in Davis.”

She explained that she got stuck at home during the pandemic, at her parents’ house in Wisconsin—”I found myself stuck in a home with 5 adults and a teenager.” She said

She explained that her parents moved to another town which has large sections of poor populations, and when school was closed it was not a great setup for how to get meals to the children who might otherwise not have food to eat.

Kelsey Fortune took it upon herself to make sure that the children were taken care of.  “We partnered with a church and were doing pickup and delivery of meals for about 500 students in town until the school district could finally get things together.”

She also told the school district that, in addition to having drive-up food service, they needed to have delivery because there were a lot of families that did not have the ability to pick up meals during the day.  She offered to do that for them, but they ended up being able to do it for themselves.

“It just reminded me of how well things can work when people push for what they know is necessary,” she explained.  “There are a lot of things happening in the world right now where people are feeling like things need to happen and we need that leadership that’s willing to just lay things out and say how are we going to do this because it needs to get done.”

It was then, still stuck at her parents’ house, that she thought, “I wonder if there’s a way I can be a leader in my community?”  She did not know anyone in the town where her parents live and yet she was able to make it happen, and she thought about how much more she could do in a community where she did know people.

Prior to this, she was primarily involved in the student side of government as part of the Graduate Student Association, where she was president of the economics grad students section for a year.

In that position “you’re still a student and you don’t have the same ability to get things done.”

She said, “I decided to take a different route and the city council was my in.”

On the issues, she has three big ones.  First, public safety.  She said a lot of people are very concerned about this right now: “I think it’s important that we listen and make changes.”

The second, she said, “would have to be housing.”  She said, “Davis needs a good plan to house a lot more people than it is (doing).”  She added, “The vacancy rate is below one percent—we need to make changes.”

The final thing, she said, is climate change.  “We have to take proactive steps to limit our footprint,” she said.  “And to be a real example for what a community can be.”

She said, “We have to deal with that.  It’s kind of taking a backseat right now, people are really focused on policing and public safety, but it’s still there.  It’s still going to have to be dealt with.  We still need to be doing a lot more than we are.”

She pointed out, “I lived here for seven years and I still don’t have a car. You don’t need one in Davis.”

Kelsey Fortune is not planning to spend a lot of money on this campaign, but doesn’t believe that will be a problem with the district election format.

“That’s one nice thing about the districts, you can talk to just about everybody there,” she said.  “It’s not like covering the whole town. You can really meet with most of your constituents—which is really cool, I like that about the district system.”

She explained “that’s what I’ve really been doing, I’ve been putting myself out there and making myself available to the public.”  That has meant going to local businesses and sitting outside for a couple hours almost every day, where people can come and chat.

“It’s been really fun,” she said.  “I have met a lot of people this way. There (are) a lot of concerned citizens, which I appreciate because I really do want to listen to what other people’s visions for Davis are.”

11 thoughts on “Kelsey Fortune Talks about Her Council Run”