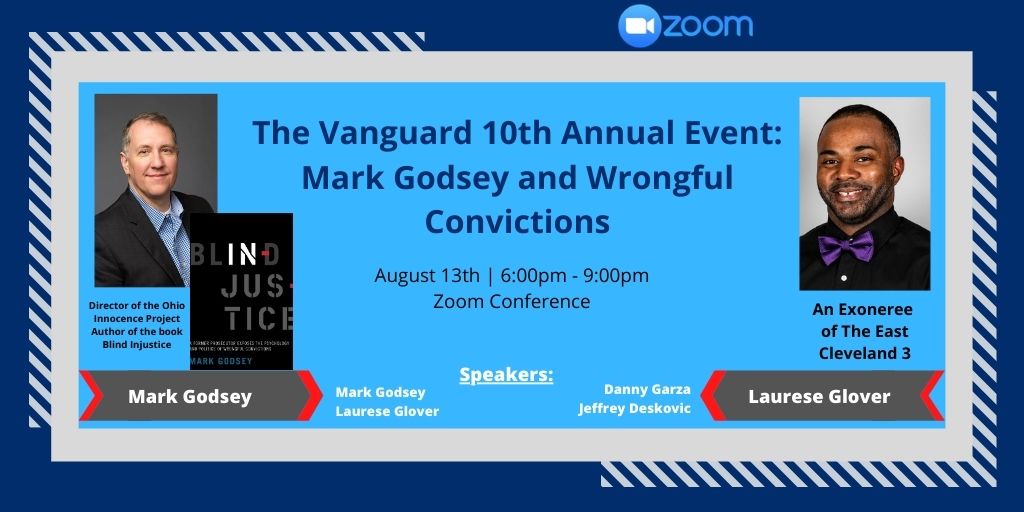 By Cailin Garcia and Shellsea Lomeli

DAVIS, CA – Dozens turned out for The Vanguard 10th Annual Fundraiser with former prosecutor and current director of the Ohio Innocence Project, Mark Godsey, as the keynote speaker, along with other inspiring guests and advocates for justice in the American criminal justice system.

Given the current situation with COVID-19, the Vanguard’s annual fundraiser moved from the University of California, Davis, Conference Center to a virtual seminar over Zoom. However, the change in venue did not curtail the core objective of the event, which was to shed light on wrongful convictions and raise support for the Vanguard—which works to uncover everyday injustices in courtrooms all across the country.

The Innocence Project, an organization that works to free the staggering number of innocent people who are incarcerated in the US, has exonerated 375 individuals through DNA testing. However, a grave amount of wrongly convicted individuals still remain in prison today and those who have been exonerated serve an average of 14 years for a crime they did not commit.

As indicated, Mark Godsey, director of the Ohio Innocence Project (OIP), was the keynote speaker at the fundraising event. Before his presentation, two other speakers joined the Vanguard to speak on their own experiences with the criminal justice system.

Danny Garza is the current vice president of the Sacramento National Lawyers Guild, a progressive bar association that provides legal support for political activists, protesters, and movements for

He spoke about his experiences as a legal observer at a George Floyd protest in Sacramento, where he was shot in the head with a rubber bullet by a police officer.

“I’m still having significant problems with my brain,” Garza said about the lasting effects he was still experiencing from the shot. He noted that the gas mask he was wearing at the time likely saved him from having a fractured skull.

Garza also spoke at length about police unaccountability and the steps needed to move forward. One point he mentioned was closing the revolving door of “bad officers” moving from one department to another when they are fired for malpractice.

Another speaker at the event was Jeffery Deskovic, a man who was wrongfully convicted at the age of 17. Charged as an adult, he served 16 years in prison before he was exonerated due to DNA evidence that identified the true guilty party.

“I believe my place in the world is to fight wrongful conviction,” stated Deskovic. He used the compensation awarded to him by the state to start The Jeffrey Deskovic Foundation in New York which has freed seven wrongfully convicted individuals and helped pass three laws.

Along with being the founder of the Ohio Innocence Project, Mark Godsey is the author of Blind Injustice: A Former Prosecutor Exposes the Psychology and Politics of Wrongful Convictions. He was joined by Laurese Glover, an exoneree whose case was rightfully overturned, thanks to assistance from the OIP.

Godsey began by explaining his first introduction to the Innocence Project when he was asked to supervise during his first year as a law professor.

During his presentation, Godsey admitted that he was quite skeptical of the Innocence Project at first, coming from seven years of experience as a prosecutor. Working with the students and meeting exonerees from across the country opened his eyes to the injustices of wrongful convictions.

“By the end of that year, I realized that there are serious problems with our criminal justice system and I had been in hardcore denial about it,” said Godfrey.

His novel details how prosecutors’ offices tend to have highly competitive cultures that place more value in winning cases than the actual truth.

Godfrey started the Ohio chapter of the Innocence Project in 2003 at the University of Cincinnati. The OIP advocates for criminal justice reform and actively works to free Ohioans who have been wrongfully convicted of crimes. Since its founding 17 years ago, Godfrey and his team have freed 30 wrongfully convicted individuals.

One of those individuals is Laurese Glover, who, as indicated above, also spoke at the fundraiser, giving a powerful testimony of his experiences after being wrongfully convicted of murder.

Glover stated that he was a teenager when he was charged with murder alongside his two friends Eugene Johnson and Derrick Wheatt—later collectively known as the East Cleveland Three.

His story was used to highlight some of the many problems with the current criminal justice system. He was convicted based on questionable forensic evidence and testimony from a witness who admitted she was not wearing her glasses when the event occurred.

Glover maintained his innocence throughout the entirety of the trial and during his time in prison. He was finally released just five years ago when the actual perpetrator of the crime was tracked down and matched the DNA from the crime scene.

“I always thought the police protect and serve. So when all this happened to us, I knew everything would work itself out because we were innocent,” said Glover. “But it took us 20 long years to fight to get our freedom back.”

Glover explained that his adjustment after being released from prison was not easy. He still suffers from PTSD that affects his daily life and relationships. However, he noted that his community of fellow exonerees from the Innocence Project and his passion for public speaking keep him grounded and motivated.

“It’s my passion—going to speak about wrongful convictions. I find it to be therapeutic for me,” said Glover about his public speeches. He hopes that telling his story to young people who aspire to be law enforcement, prosecutors, and judges will prevent future wrongful convictions.

Godsey rejoined Glover for a Q&A with the fundraiser attendees. When asked what can be done on a national scale to help prevent wrongful convictions, Godsey stated the following:

“Like every other civil rights movement, it succeeds if you never take your foot off the gas. The fight for social justice never ends. You never win. All we can do is have incremental improvements. And that fight is worthy.”

“Thank you everybody for being here, but most importantly thank you for supporting the Davis Vanguard,” Godsey stated at the end of the event. “The longer I’ve done this, the more I’ve realized that change is going to come from education, from court watching, from spreading the word at a grassroots level.

“There needs to be Davis Vanguards in every jurisdiction. This is a trailblazing organization and making this one strong is going to help it spread,” he finished.