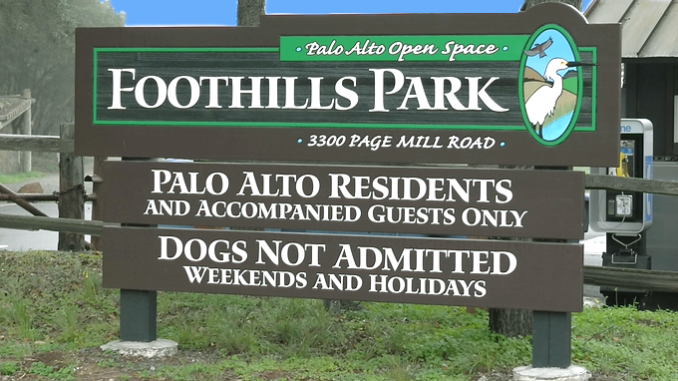 But this beautiful park is now the center of a civil rights controversy because of a discriminatory policy that bars non-residents from entering without being faced with high fines or potential jail time.

The ACLU Foundation of Northern California has teamed up with Munger, Tolles & Olson, LLP to act against this policy by filing a lawsuit against the City of Palo Alto, charging the Foothills Park non-resident policy is not only unconstitutional, but also highlights Palo Alto’s well-documented history of racial discrimination.

According to the complaint filed by the ACLU in Santa Clara County Superior Court, the Palo Alto ordinance violates both the U.S. and California Constitutions by infringing on plaintiffs’ rights to freedom of movement, freedom of speech, and freedom of assembly.

The suit’s plaintiffs include the National Association for the Advancement of Colored People of San Jose/Silicon Valley (NAACP) and 10 individuals who are residents of Palo Alto, East Palo Alto, Menlo Park, and neighboring communities throughout Santa Clara and San Mateo Counties.

The complaint maintains that the non-resident ban “traces its roots to an era when racial discrimination in and around the City was open and notorious,” citing past racist policies enforced by Palo Alto

The ACLU alleges that Palo Alto’s population reflects the city’s racist past – only 1.6 percent of Palo Alto’s residents are African American.

“Palo Alto’s exclusion of its neighbors violates the civil rights of communities who too often still find those rights under threat: Black and Brown communities,” said William S. Freeman, Senior Counsel at the ACLU Foundation of Northern California.

Plaintiff Alysa Cisneros said the park’s policy had personally affected her, noting, “This past Fourth of July, I took my daughter to Foothills Park to protest the exclusion of non-residents. The park ranger turned us away from the entrance because we do not live in Palo Alto. On this most American of holidays, we were reminded of the inequities that still exist in our own backyards. I want to show my daughter that it is important to face the things that are wrong in our communities, and to work to do something about them.”

Rev. Jethroe Moore II, President of the NAACP of San Jose/Silicon Valley, issued a statement on the Foothills Park lawsuit, emphasizing the importance of allowing public access to the park amid the COVID-19 pandemic.

“In our communities, we need more inclusive spaces. We need public green spaces that truly reflect the meaning of the word ‘public’—‘for the people.’ This is even more important during this time of global pandemic, when outdoor public areas are some of the few places where we can safely and responsibly enjoy time away from our homes. This experience should not be exclusive to those who hold the most racial and socioeconomic privilege,” said Moore.

The ACLU also aims to use the suit to stop Palo Alto from using public funds to enforce the discriminatory policy. Several plaintiffs expressed negative feelings about their tax dollars being put toward preventing others from entering the park, including LaDoris Cordell, a retired Superior Court judge and former member of the Palo Alto City Council.

“I cannot in good conscience sit by while the city of Palo Alto uses my tax dollars to perpetuate the exclusion of people from public spaces in my community. The practice of blocking non-residents from Foothills Park perpetuates inequity, and it must end,” said Cordell.

Plaintiff and Palo Alto business owner Gwen Gasque also weighed in: “As a Black woman who grew up in the segregated South, I find this ordinance particularly offensive. Even though I own a business in Palo Alto and have for many years paid taxes that fund the park, I cannot enter it.”

“I attended schools in the Palo Alto Unified School District for many years, I currently work and serve as a volunteer in nonprofit organizations in Palo Alto, and have spent much of my career in public service. Yet I am barred from entering the public grounds of Foothills Park,” said Laura Martinez, who is not only a plaintiff but also the former Mayor of East Palo Alto.

“It is time for Palo Alto to end its exclusionary policy and welcome all members of the surrounding community to Foothills Park,” Martinez concluded.

Share:
Tags:ACLUDiscriminationLawsuitNAACPRacism
Previous : Judge Sets Trial for Defendant Charged with Pushing Wife Out of Car, Beating Her and Breaking into Home
Next : Louisville pays $12 Million to Breonna Taylor’s Family and Enacts Police Reform