In early July, Supervisor Don Saylor submitted a number of questions to DA Jeff Reisig about their funding requests (see here).  The night before the Board of Supervisors Budget Workshop, the DA finally posted the response on his website.

The DA posts: “The comprehensive 29 page report, submitted far in advance of the September 29, 2020, Board of Supervisors (BOS) Budget meeting, was prepared with the input from numerous District Attorney staff in response to a multitude of questions posed by Board of Supervisors member Don Saylor in preparation for the September 29th BOS budget meeting.”

In response to the increased expenditure, the DA responds as follows:

First, “It should be noted that many of the questions regarding the DA’s budget made comparisons between actual expenditures in FY 18/19 to estimated budgets in FY 19/20 and 20/21. Comparing actual expenditures (FY18/19) with estimated budgets (FY19/20 & 20/21) is not a scientific way to measure changes in budgets (e.g., not apples to apples). During DA Reisig’s tenure as DA, this office has always stayed within its allocated budget.

“Unforeseen events occur throughout a year that are not within a department’s control. Positions becoming vacant and are not filled or there is a delay in filling the position. Budget crises

“With respect to the office, in FY18/19, among other things, two DDA IVs resigned. We did not hire for one position and the other was hired at a lower level resulting in salary savings. We budgeted for both positions in FY19/20 and we chose not to hire the position we left vacant in FY18/19 due to budgetary constraints caused by COVID.

“Although departments do their absolute best in planning and preparing a budget for the upcoming fiscal year, it is impossible to completely and accurately anticipate unpredictable events in the upcoming year (e.g., unplanned resignations, budget crisis caused by COVID-19, etc.). As a result, it does not make sense from a fiscal standpoint to compare actual expenditures from one fiscal year to an estimated budget in another fiscal year.”

So the question is what caused the increase in the DA’s budget over the three-year period from FY 18/19 to FY 21/22?

“In FY 19/20, the District Attorney requested $9.3 million in General Fund dollars, but at recommended and adopted budget, we were allocated a little over $8.2 million,” he continues.  “To reduce the general fund contribution by 1.1 million, we were asked by the Chief Budget Official to use fund balances we had in special revenue funds to balance our budget. Though nearly all special revenues fund balances cannot be used for this purpose, we were able to budget $863,000 towards salaries and benefits. We also held an attorney position vacant to reduce the gap by another $180,000.

“We have multiple grants that fully fund their programs. Victim Services is the only unit in which its primary grant does not fund their entire program. General funds/public safety funds contribute to Victim Services’ operating expenses such as landlines, cell phones, mileage to meet with victims, and to fund their benefits.”

The DA does present some interesting data.

The DA argues that his primary charge “is criminal prosecution.”  Here the chart shows an interesting pattern.

The cases received has largely dropped since 2015, but the cases filed, with the exception of 2018, have remained steady.  What seems to have dropped is the number of cases rejected by the DA.

There is also the issue of racial disparity.

The DA writes: “Based on the data presented by the Sheriff, DA and Probation at the Board Workshop on racial disparity in Yolo County on July 21, 2020, the disparity of race/ethnicity is consistent across all three departments and is also very notable in that the percent of criminal justice involving black individuals exceeds the percentage of black residents in the county.”

As he did in April, he offers, “One must keep in mind that many individuals committing crimes in Yolo County are not County residents so comparing the census numbers to individuals who are criminally justice involved are ‘predictably inaccurate’ and unscientific.”

He does allow, “That being said, this data is informative and troubling and must be explored further.” 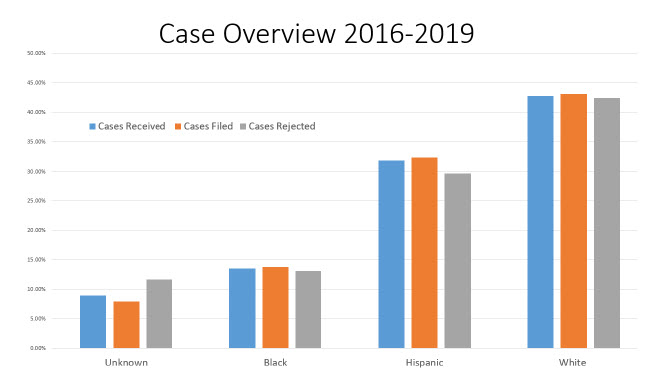 The DA’s data shows cases received, cases filed, and cases rejected.  But that may actually underestimate the racial discrepancies.  When Tracie Olson looked at the jail population on a day in April, it was 28 percent Black.  The DA’s chart shows about 14 percent Black and over 30 percent Hispanic.  By merely looking at cases filed it ignores other components—severity of charges and percentage of people in custody pre-trial, either due to severity of charges or inability to pay for bail.

The DA has consistently downplayed the discrepancies by arguing that many of the population are from out of the county.  It is not clear how relevant that fact actually is.  However, the Black population in Sacramento County is about 9.5 percent of the total population while in Solano County, it is a bit higher at 13 percent.  Even taking that factor into account, there would seem to be a disproportionate number of Blacks charged with crimes and, in particular, being held in custody.