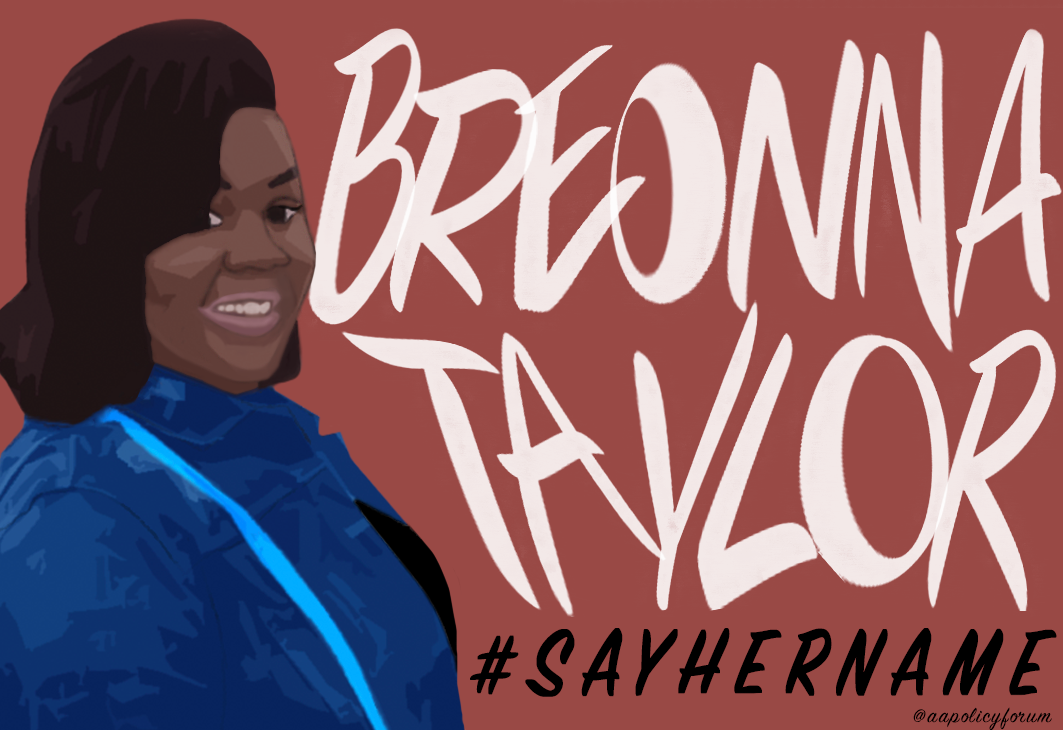 LOUISVILLE ー With protesters already gathered in downtown Louisville, Attorney General Daniel Cameron announced Wednesday the much anticipated findings of the Grand Jury investigation into the case of the death of Breonna Taylor, fatally shot by police in her apartment on March 13 this year.

The Grand Jury indicted one officer, Detective Brett Hankison, who has been terminated from the force, with three counts of first-degree wanton endangerment for firing recklessly.

Markedly, the officer was not indicted for the killing of Taylor.

Within an hour or so of the announcement, disappointed demonstrators protested in the streets as tensions increased – shortly, police had already made arrests of demonstrators.

The two other officers involved in the shooting were not indicted, based on the conclusion that the officers fired in self-defense. The Attorney General also announced that his office will be creating a task force that will investigate and seek ways to reform the search warrant process in the

Attorney General Cameron prefaced his announcement with the statement that the shooting and death of Taylor is “unequivocally” a tragedy, expressing his first-hand knowledge of the pain that this loss has left in the lives of Taylor’s family. This, he argued, should not affect, or alter the proceedings of justice.

“Despite passions [and] opinions,” he stated, “…the rule of law must apply, justice must be done.”

Cameron explained the process of the Grand Jury investigation and review of evidence, which only just concluded with final interviews last Friday. The evidence presented to the Grand Jury, the Attorney General explained, was limited to ballistic forensics, 9-1-1 phone calls, and statements from the officers and civilian witnesses. No video evidence exists of the actual shooting.

The compiled evidence, Cameron explained, demonstrates that the three plain-clothes officers arrived at the location on the matter of executing a search warrant in a narcotics investigation.

He accused the Attorney General – who was a speaker at the GOP convention and Trump supporter – as well as President Trump of denying systematic racism. “[Taylor was] in the sanctity of her home, the place where you are expected to be safe.” Crump argued that Taylor’s death is indicative of historic and continuous racism against African-Americans.

In a pointed tweet, Crump said, “The rallying cries that have been echoing throughout the nation have been once again ignored by a justice system that claims to serve the people.”

He continued, “But when a justice system only acts in the best interest of the most privileged and whitest among us, it has failed.”

Critics have focused on whether the officers in question knocked and announced their presence. The warrant itself was originally a no-knock warrant. However, by the night of the incident, the court had changed it to a knock and announce warrant, as the Attorney General confirmed in his announcement.

Witness testimony seemed to corroborate the officers’ statements that they knocked then announced their presence, which led the Grand Jury to determine that the officers were not in violation of their requirement to make their presence known.

However, there are other accounts that as many as 12 witnesses – including two who called 911 asking for police – who said they heard no announcement.

Sergeant Mattingly “was the first and only to enter the apartment,” according to the AG, after there was no response from inside the residence and officers made the decision to breach the door. In the hallway, he encountered a male and female, who was Kenneth Walker and Breonna Taylor.

According to Mattingly’s statement, Walker was holding a gun with his arms outstretched. Mattingly then testified that he was shot in the foot, which led to an opening of fire from the officers; Walker admitted that he was the first who fired his weapon, which is also shown by the ballistics report.

“The round that struck Sergeant Mattingly was fired from a nine millimeter handgun. The LMPD Officers fired 40 caliber handguns,” said the AG

“Within a matter of seconds,” he said, Taylor was struck by six bullets, with one being the fatal shot. According to the evidence, this shot came from Detective Cosgrove, not the indicted officer. Hankison fired his weapon 10 times from outside the residence through a sliding glass door and a window, with bullets traveling through apartment four and three.

“We had to try every means necessary” to find who fired the fatal shot, and the Attorney General said that the ballistic evidence does not show any indication that Hankison shot Taylor.

Cameron contends, that given that the Grand Jury found that the officers fired in self-defense, the officers were not indicted for the shooting that killed Taylor. The fact that Hankison fired his weapon from outside through the window and glass door, and landed bullets in two apartments, is what secured the Grand Jury’s indictment against the officer for first degree wanton endangerment.

If convicted, Hankison is facing up to fifteen years, or five years for each of the three counts. First degree wanton endangerment is considered a class D felony.

The Attorney General recognized that “not everyone will be satisfied” with these findings and the indictment, but assured the public that the Grand Jury conducted their investigation and review “with a specific goal in mind: pursuing the truth.”

He then finished his statement by discussing the creation of the task force. This task force will review the process of securing search warrants, offering a “top to bottom” review. “I am committed to being part of the healing process,” he added, “you have my word that I will vigorously prosecute the charges … I choose the side of justice, truth, that moves the commonwealth forward and towards healing.”

During the question period, the press asked several times about the evidence indicating that officer’s did in fact announce their presence before breaching the door. The Attorney General responded by returning to the civilian witness testimony mentioned earlier in the announcement.

When asked if he recognized that some may feel that the “black community is not getting full justice” and how can the community heal, Cameron replied that he understands the pain: “I understand [the anger] as the Attorney General… I understand that, as a black man, how painful this is, which is why it was so incredibly important to make sure that we did everything we possibly could to uncover every fact…”

Protesters gathered in the downtown area to express their disapproval of the indictment, before and after the announcement. As shown by the attorney’s reaction, those protesting are concerned primarily that these findings are not satisfactory, and that the case is representative of nationwide insufficient justice for not just Taylor, but numerous African-Americans involved in police shootings, recently and in years past.

The Attorney General’s statement defends the indictment, arguing that while it is a tragic case, any further indictment, such as manslaughter or homicide, would not be in keeping with the evidence, criminal law, and justice.