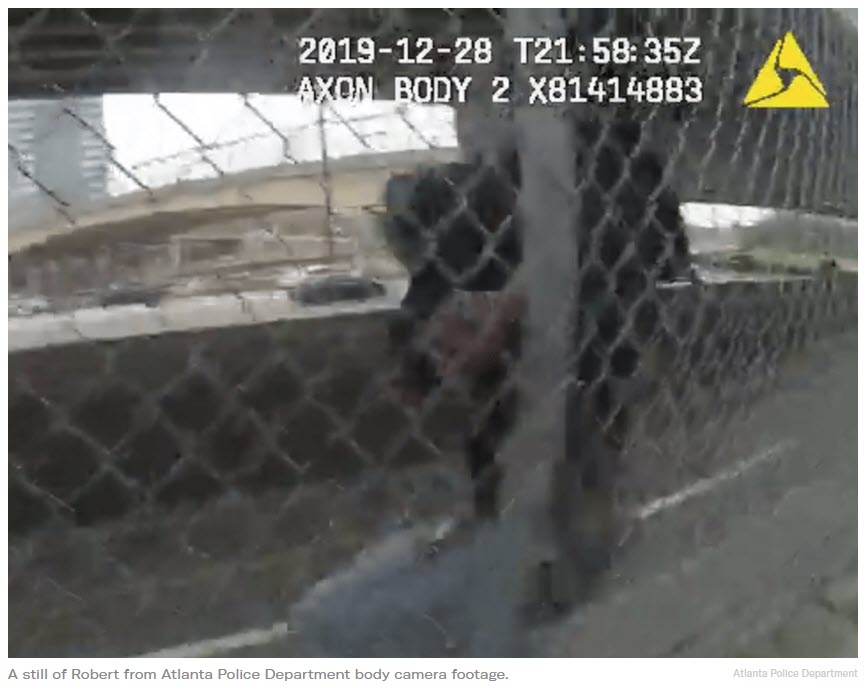 The 17-year-old, who his lawyers say was pushed off a fence by a police officer, survived the fall but suffered serious injuries.

Robert was a football player. The 17-year-old was headed into his senior year of high school with hopes of playing the game that he loved with his friends again in the fall. (The Appeal is withholding Robert’s last name because he is a minor.)

That changed in December when an interaction with an Atlanta Police Department officer ended with Robert shattering his legs. His mother Koranda told The Appeal that her son has trouble

walking normally because of his injuries.

“When I see him walk, it hurts because he didn’t do nothing to nobody to deserve that,” Koranda said.

On Dec. 28, two police officers were dispatched to the intersection of 17th Street Northwest and Spring Street Northwest where Robert was standing on a median in the street. A bystander had called police because they thought Robert was selling drugs. As the officers approached him in a squad car, they expressed skepticism, according to body camera footage worn by Officer Erik Clanton and provided to The Appeal by Zack Greenamyre, a lawyer with Mitchell & Shapiro LLP who is representing Robert.

“There’s no way this kid’s selling dope in the middle of the street,” the officer in the driver’s seat, listed as J. Douglas in the police report, says 55 seconds into the video.

But Douglas continues, suggesting there was another way to apprehend Robert. “You can’t just hang out in the median … I need the code section, you know. There’s got to be something.”

At about two minutes and 20 seconds, the police car approaches Robert and he runs. In his report, Clanton wrote that Robert threw two water bottles he had under his sweatshirt onto the road as Clanton chased him. Greenamyre told The Appeal that Robert ran because had been told by friends and family members that police harass and arrest people for petty offenses, like selling water bottles without a license, and he didn’t want that to happen to him.

Clanton exits the police car and chases Robert across a parking lot and to a fence, which Robert starts to climb. Clanton runs into the fence forcefully, despite knowing, as he acknowledged later in his report, that there was a 20- to 30-foot drop onto the highway on the other side. Robert, now at least partially on the other side, appears to lose his grip and falls off.

Greenamyre contends that Clanton struck the fence twice, first loosening Robert’s grip from the fence and then again, causing him to fall. But in his report, Clanton wrote that he tried to grab Robert first but couldn’t reach him.

“As I approached the male has almost climbed over the fence and I attempted to reach for him to pull him down but he threw his body over the fence to where I could no longer reach him,” Clanton wrote. “The male then dropped onto the concrete below and appeared to still be moving.” Clanton noted the cuts on his own legs as well, which he attributes in the video to striking a concrete ledge near the fence.

After Robert falls, Clanton turns away from the fence and appears to yell, “Fuck!” He walks away, and nearly a minute passes before he returns to the fence to look down at Robert. Several other officers and emergency medical staff arrived shortly after to tend to Robert.

“He’s lucky to be alive,” Greenamyre said of Robert. “He’s a young kid going through something difficult. I think in some ways I think he’s still getting his head around all of this and what he’s lost.”

Beyond the fractures to his legs, Robert suffered a broken shoulder and facial fractures. He spent nearly a month in the hospital as a result of his injuries and underwent multiple surgeries. Robert is also supposed to receive physical therapy, but that has been delayed because of the COVID-19 pandemic.

As Robert was being loaded into the ambulance on a stretcher, other officers suggested that Clanton, who suffered two cuts on his legs, join him. “You got Aflac?” an officer asks at 32 minutes and 45 seconds, referring to the insurance company. “Just have them document for you that you’re injured as well and being transported … you’ll get 200 bucks for it.”

Prosecutors charged him with being a pedestrian soliciting rides or business, darting into traffic and two counts of disorderly conduct. Greenamyre said Robert potentially faces several years of incarceration for these offenses.

On Sept. 10, Robert’s lawyers sent a letter to the Atlanta City Council and mayor, demanding that the charges against him be dismissed, and that the city cover his medical bills and make significant changes to its police department, including ending custodial arrests for minor offenses like jaywalking and solicitation.

Greenamyre shared the letter with The Appeal.

“We write you directly as our city’s elected officials because we have little faith that the city’s law department will do anything other than reflexively defend the status quo,” Greenamyre and Samantha Funt, who is also representing Robert, wrote. “The misconduct presented here, and its heart-breaking consequences, is too severe and too systemic to wait years for justice.”

The letter follows months of nationwide protests, including in Atlanta, against police brutality. Despite the public’s calls to defund the city’s police department, Mayor Keisha Lance Bottoms asked to increase its budget by more than $13 million. And a vote to set aside about one-third of the police budget for community-based initiatives and social services failed 7-8 in the City Council.

In June, Atlanta police officers, responding to a report that a Black man was asleep in his car in the Wendy’s parking lot, shot and killed Rayshard Brooks as he ran from them. Protests quickly followed his killing and Erika Shields resigned as police chief within hours of Brooks’s death. Former Officer Garrett Rolfe, who killed Brooks, was charged with murder and Officer Devin Brosnan was charged with aggravated assault. Rolfe, who is fighting the charges, has sued the police department to be reinstated.

Greenamyre did not place a timeline on the demands submitted to the city but said if it does not respond soon, he planned to file a lawsuit to force the issue.

“I want justice for my son,” Koranda said. “And I want to make sure this don’t happen again.”

Share:
Tags:Atlanta PolicePolice MisconductUse of Force
Previous : Vermont County Eliminates Cash Bail ‘Caging Black, Brown and Poor People’
Next : My View: The Death of an Icon and the Legacy of Ruth Bader Ginsburg