A Letter to the Public Safety Joint Subcommittee

When formulating the specifics of policy changes, it is easy to lose sight of why that policy change is necessary in the first place. It is important to take a step back and remember the broader picture. The process of re-envisioning public safety was spurred by an outpouring of grief and hurt in the wake of the police murder of George Floyd and countless other Black people across our nation in recent months and for decades before that. These murders do not stop, or slow even while the nation is in the midst of a pandemic. The recent shooting of Jacob Blake has highlighted the urgency of the situation and the danger of maintaining the status quo. Our region of Northern California has been the site of many high-profile police shootings such as Stephon Clark (Mar 2018), Willie McCoy (Feb 2019), and Sean Monterrosa (Jun 2020). Our state, region or city cannot expect to exempt itself from this long overdue conversation.

We want to take a moment to recenter the conversation not on the minutiae of the data or local politics or ego, but instead on the people in our community for whom the current system is failing. In public forums, commission members and city leadership have heard from the Black and Brown people in our nation and in our Davis community who say that they do not feel safe in the presence of law enforcement.

We have reached an inflection point that was well summarized by Dr. Khalil Muhammad, a Harvard professor of history, race, and public policy when he said:

“The question that has to be asked in the wake of George Floyd. . .do white people in America still want the police to protect their interests over the rights and dignity and lives of Black, and, in too many cases, Brown, Indigenous and Asian populations in this

It is the task of this sub-committee to reaffirm, through your actions, that the City of Davis’s answer to this question is a resounding no. A return to or insignificant attempt to “reform” the status quo is insufficient.

As acknowledged by Mayor Gloria Partida and Vice Mayor Lucas Frerichs in their June op-ed in the Davis Enterprise, while the changes we have made are moving in the right direction, there is much more work to be done. The truth is that these incremental changes are not enough to overcome a philosophy of, and approach to public safety that relies on criminalization, perpetuates inequity, and which fundamentally does not protect and serve every member of our community equally.

While the path may not be immediately clear on how to solve this centuries-long problem, there are forms of evidence that exist that can guide us in this process. We want to emphasize that any further steps, especially as we consider a transformative change, need to be based on the best available evidence. By evidence, we mean data from our community, academic literature, expert opinion, and stakeholder and community experiences.

On the topic of alternative first responder models, our research team has compiled an extensive list of academic literature, reviews, meta-analyses, etc. written by experts. The alternative models fall broadly into the categories of: Crisis Intervention Team Training (CIT), Co-Responders, Mobile Crisis Teams, and EMT and ambulance-based responses. Each of these models vary in their levels of officer involvement, ranging from the armed officer as the sole responder (CIT) to a response involving both an armed responder and a medical professional or social worker (Co-Responder), to an entirely medical/ social worker response team which calls upon armed officers only when necessary (Mobile Crisis Teams, and EMT/ambulance based). [For an extensive review of all models, definitions, pros, cons, etc. we recommend the Vera Project’s October 2019 review: ‘Crisis Response Services for People with Mental Illnesses or Intellectual and Developmental Disabilities: A Review of the Literature on Police-based and Other First Response Models’.] 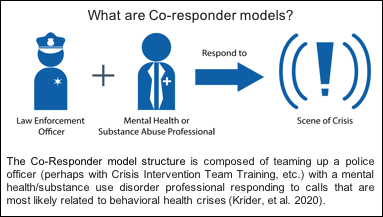 To determine which models will be appropriate for Davis, this sub-committee and city leadership need to understand the benefits and downsides to each of those models. However, in the August 11th joint subcommittee meeting, discussion seemed to focus almost entirely on the co-responder models and CIT training. We want to caution against focusing on only one or two models before giving full consideration to the many models available both nationally and internationally. While we have heard some of the benefits of the co-responder models in the last meeting, we want to highlight some of the critiques from the academic literature that have not yet been discussed and that we feel require particular attention when creating solutions for Davis.

Firstly, the effect and outcome of having an armed officer as a primary responder even as part of a co-responder team has yet to be extensively reviewed as the current co-responder models are diverse and myriad in their approaches, making it challenging to effectively determine the model’s efficacy in relation to other models which do not involve armed officers (Vera Project, Puntis et al. 2018; Shapiro et al. 2015).

However, based on the available literature, here are commonly discussed concerns:

As we mentioned, academic literature is only one of the many forms of evidence that we should be considering. Another crucial form is hearing local community members’ experiences with police and social services in Davis. To that end, our Local Voices researchers have created a survey on police interactions to be circulated to community members. They are compiling a list of community members from groups disproportionately affected by the police and are planning a series of community stakeholder roundtable discussions to get input on alternative public safety models. This community outreach is crucial to the goal of ensuring all members of our community have a seat at the table during this important process.

We cannot stress this enough- this joint subcommittee has the opportunity to enact meaningful changes that can substantially improve our community. You have the opportunity to be bold, creative and truly transformative. Davis has everything it needs to be a leader in this moment of national reckoning: a public will, experts at one of the largest public universities in our city, and an engaged community that is eager to help move this process forward. All we need now is for our leaders to be brave, gather the evidence, and take action.

30 thoughts on “Guest Commentary: Toward a New Model of Policing for Davis”