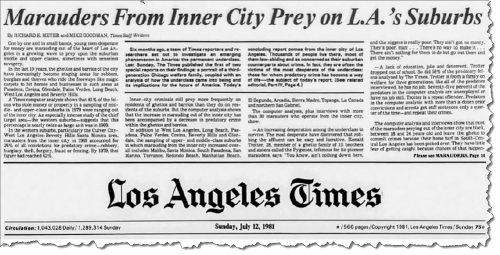 LOS ANGELES – Throughout the history of the Los Angeles Times, the paper has investigated, documented, and highlighted the economic and social issues facing communities of color; however, its newsroom fails to be representative of the diverse communities that constitute the multicultural city of Los Angeles.

The police killing of George Floyd on May 25, 2020, in Minneapolis, Minnesota, sparked a public outcry throughout the United States. The power and anger fueling the Black Lives Matter movement has compelled many white Americans to acknowledge and confront the systemic racism and racial disparities that exist in every aspect of American life.

On September 27, 2020, the LA Times Editorial Board published an introspective piece after reflecting on its own discriminatory journalistic history. By taking the time to apologize for its racism, the Times owns its past and hopes to offer a more “inclusive and inspiring” future.

The LA Times Editorial Board shared how the paper began as an “institution deeply rooted in white supremacy and committed to promoting the interests of the city’s industrialists and landowners.”

Under the conservative influence of Harrison Gray Otis from 1882-1917, the LA Times was used as a tool to “further a naked agenda of score settling, regional boosterism, economic aggrandizement and union busting.”

Control of the paper later passed on from Otis to his son-in-law Henry Chandler in the early 20th century. Despite significant events such as “Dust Bowl migration, the World War II arms industry and a vast movement of Black Americans escaping Jim Crow Segregation” that altered the landscape of the region, the LA Times remained almost all white in its personnel, readership, and perspective.

In fact, during this time period, the LA Times utilized its extremely influential voice to support “wartime incarceration of Japanese Americans.”

The last “patriarch who controlled the Times for its first century” was Otis Chandler, a man considered to be knowledgeable and open-minded. Under his tenure, he hired hundreds of journalists with the aim of repositioning the paper to take a “more politically neutral” stance while advocating many of the objectives of the Civil Rights Movement.

Even though the newspaper as a whole moved in “a more progressive direction,” the people who comprised the newsroom remained mostly white, which does not “come close to representing the city’s demographics.” The fact that the Times almost exclusively filled its newsroom with white men oriented the paper to solely seek out a white audience, causing the paper to fail to provide an “accurate account” of the “city, region and state at a time of rapid change” to all Los Angeles residents.

Another example of racism highlighted by the editorial article was the LA Times’ slow response covering the shooting of 39-year-old Eula Love by police officers in 1979. As a result, top editors of Otis Chandler’s organization began to reevaluate “how the paper covered the LAPD.”

Eventually, small “progress came from the bottom up,” with published series by Latino journalists focusing on how the Latino community was positively transforming the greater LA area instead of the usual “crime, gangs, illegal immigration” rhetoric.

Despite the strides made in newspaper content, the LA Times continued to possess a “dearth in diversity” due to a shortage of journalists of color in its newsroom. The LA Times then began known for “having one of the poorest records for minority advancement of any major paper in the country.”

After the brutal police beating of Rodney King in 1991 and the riots that followed, the LA Times won a Pulitzer Prize for its covering and reporting of the situation. During this period of unrest, “newsroom tensions burst into the open,” leading the paper to commit to improvements.

The LA Times hired more journalists of color to cover stories transpiring in the overlooked and undervalued neighborhoods of South and East Los Angeles. Unfortunately, this effort came to a close in 1995.

Since the “extended Chandler family still owned the paper,” the LA times ran rampant with political divisions. The top editors of the Times “pushed for broader and better coverage of the city’s diverse communities,” but found themselves in a constant tug of war with those who felt the paper had “leaned too far leftward.”

Then, in 1994, “the top business executive, Publisher Richard T. Schlosberg, III” ordered the LA Times Editorial Board to support Republican Governor Pete Wilson in his bid for reelection. Since Wilson was the primary supporter of Proposition 187, a ballot initiative that sought to deny public services to undocumented immigrants, he disgusted many staff members of the LA Times.

A summer after Proposition 187 was adopted by California voters and then struck down by the courts, Janet Clayton became the “named editorial page editor.” She was the first person of color to hold this title. Throughout her time in this position, the LA Times’ opinion section grew to “reflect an optimistic, progressive and inclusive political vision.” The newspaper expanded to include Frank del Olmo, “the first Latino on the masthead,” and Andres Martinez, “a Mexican-born writer…as editorial page editor.”

Unfortunately, this high point of diversity was extremely fleeting. Clayton, Del Olmo, and Martinez were no longer with the LA Times after 2007.

The LA Times remains positive in its pursuit of inclusion and diversity. The Editorial Board shares that “an organization should not be defined by its failures, but it must acknowledge them if it is to hope for a better future.”

Ultimately, the “current pandemic, economic crisis, and national debate over policing” has provided individual citizens and institutions with an opportunity to examine their part in perpetuating systemic racism. The LA Times is no different.

By acknowledging and apologizing for its past racism, the LA Times strives to create a newsroom that reflects the community that it represents and commits to “including stories that historically were neglected by the mainstream press.”