On Tuesday morning outside of the Sacramento Police Department on Freeport, attorneys, friends, family and supporters of Jeremy Southern gathered as Attorneys Adante Pointer and Patrick Buelna announced they were filing a Federal Civil Rights Lawsuit against the City of Sacramento for Southern’s death.

“We are all outraged and demand accountability for the death of Jeremy Southern,” Pointer said on Tuesday at the press conference. He said, “He had his life taken from him in the most unnecessary,

needless unlawful and tragic way. It was wholly preventable what took place.”

On July 15, 2020, two Sacramento police officers confronted Jeremy Southern as he was walking at the Crossings Apartment Complex. The two officers reportedly believed Mr. Southern was involved in a shooting that had taken place at the apartment complex some time before.

Pointer said that the two officers who first arrived acted appropriately. While they pointed their guns at Southern, he pulled his gun as well.

Those officers attempted to use de-escalation techniques to resolve the situation using verbal persuasion.

However, “the responding officers abandoned their training and violated their duty,” Pointer said. “The two officers that initially contacted Jeremy, they did what the officers were trained to do—which is de-escalate the situation. Being in possession of a gun is not a death sentence.

“The two original officers, they tried to de-escalate the situation,” he said. He noted that Southern did not fire a weapon or even direct any verbal threats at the officers. “This young man needed help.” He said, “Instead of bullets, this young man should have continued to receive assurances from the officers that it didn’t have to end this way.

“Things took a turn for the worse and ultimately ended deadly when the responding officers came to the scene with their high powered rifles,” he said.

Within mere seconds of arriving, one of the rifle-toting officers fired a shot striking Southern in the chest. The impact of the gunshot caused Southern and the small handgun he was holding to hit the ground. The gun tumbled away from Southern, landing approximately 10 feet away and well out of his reach.

Four minutes past, Jeremy Southern lay on the ground, in critical condition, bleeding out, not moving, and the officers failed to make any significant and subsequent effort to either separate him further from the gun or provide him with substantive medical care. 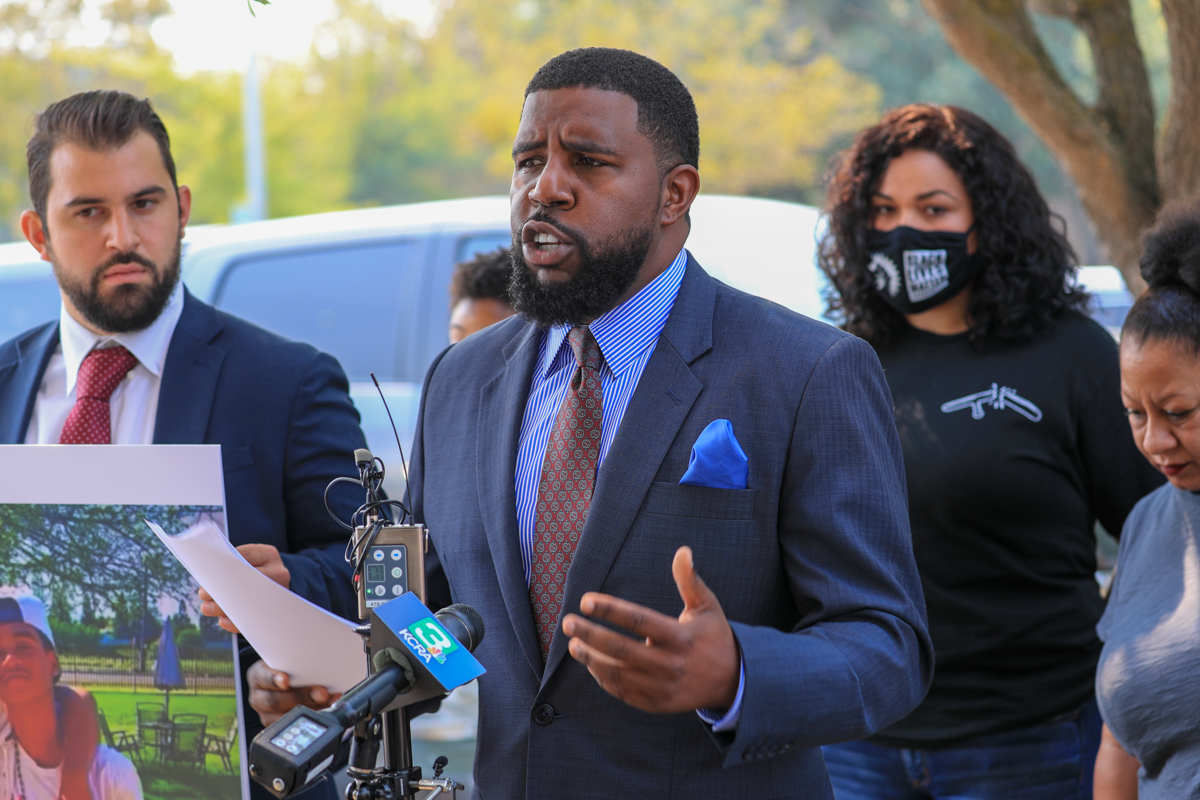 About this time Southern started to stir. A second officer fired the second shot into his back as he began to make the slightest movement of raising himself off his gunshot wound.

“The second shot was unnecessary,” Pointer said. He clarified that the new law on the use of deadly force requires it to be only when necessary. “We contend and we believe the video tape shows, that second shot was not only unnecessary, it was criminal.”

The video shows that Southern was at least ten feet from the firearm—and the police had ample time to move it out of the way prior to his starting to stir.

“There was no reason for the officer to take a kill shot, striking this young man in his back,” Pointer said. “That was criminal conduct.”

He said that the officer should be identified, taken off the streets and charged.

“He should be given what Jeremy never had a chance to do—which was his day in court,” he said. “He took a 22-year-old man’s life and he should be held accountable for it.”

So they have filed a federal lawsuit to hold the officer accountable for his actions.

Patrick Buelna agreed that “the second shot was unnecessary and unlawful. Mr. Southern was critically injured, unarmed and in need of medical attention. Instead of safely bringing Mr. Southern into custody, officers chose to be judge, jury and executioner—killing him with an unnecessary second shot several minutes after he had been critically wounded and lying on the ground.”

She said that Jeremy did not get his due process and reminded folks, “Sac PD knows how to de-escalate—they chose not to de-escalate.”

She noted that the police violated their own use-of-force policy for the second time since it was put into place. “We want to know what the repercussions are going to be for the officers that violated this policy.

“What good is making a policy is you’re not having change,” she added. “And Jeremy didn’t have to die.”

Jimmy Southern, the older brother of Jeremy, explained that his brother grew up in foster care and by 22 had endured more than most people endure in a lifetime.

He said that Southern endured abuse and an encounter with the criminal justice system that stole years from his life. “His fear of police was grounded in real life tragedies and inequities.”

He added that “growing up in this system often carries with it death from overzealous Sacramento Police officers who decided that a scared young Black man did not deserve to live.”

The first shot struck his chest and disarmed him. He lay on the ground bleeding out, while officers stood around and did nothing.

Adante Pointer would add, “Jeremy Southern should have been afforded every opportunity to live. Instead, videotape of the incident showed that a Sacramento Police Officer mercilessly shot Jeremy in the back as the unarmed 22-year-old was lying on the ground. The kill shot took his life and any hope he may have had to survive this deadly encounter.”

Pointer added, “It’s unconscionable, unethical and just plain not right what that officer did to Jeremy Southern.”