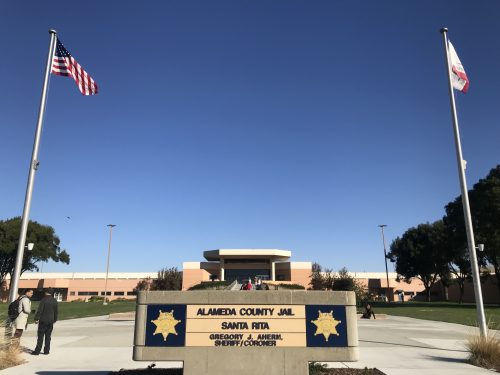 Last week at Santa Rita Jail, two housing units under quarantine were released days after they began quarantine, citing negative test results for the index case. No new positive COVID-19 cases among the incarcerated population have been detected for six days. The number of confirmed active cases are the lowest they have been since early July.

Cal Fire lifted all evacuation orders and warnings for the SCU Lightning Complex Fire in Alameda County on Aug. 31, meaning Santa Rita Jail is no longer under threat of fire danger, though ASCO never publicly announced an evacuation plan for the jail when the threat was active.

On Saturday Aug. 30, ACSO announced the release of HU 31 A, B and C from quarantine, which began three days prior on Aug. 27. This housing unit was released from quarantine early due to negative tests among those temporarily placed there. It was initially scheduled for release on Sep. 10.

Also on Saturday Aug. 30, HU 6F began quarantine and was scheduled for release on Sep. 14. However, HU 6F appeared to have been released after two days, as ACSO’s daily update did not include the housing unit in its report on Sep. 1.

Jen Diaz, a Wellpath representative, said in a conference call that housing units are quarantined when someone presents symptoms while awaiting test results. If the person tests negative, then quarantine can be lifted.

On Sep. 5, ACSO announced that HU 24D began quarantine and is scheduled for release on Sep. 19, unless negative tests allow for earlier release. This is the seventh time HU 24D has been under quarantine.

HU 3E, 3F and 8B remain under use to hold individuals with a known exposure to COVID-19. These units have been in quarantine since July 31.

There have been 3,363 tests completed in the jail cumulatively. This number does not reflect the number of individuals tested since one person can be tested multiple times to monitor their condition. This week, 134 tests have been completed. There are currently 40 tests pending results.

Testing revealed one new case on Saturday Sep. 5 among the incarcerated population. No new cases emerged during the week, however ACSO also reported that six people recovered this week. On Sunday Aug. 30, there were eight COVID-19 positive people in custody. Five of those cases were resolved by Monday Aug. 31, dropping the number of cases active in custody to three. On Friday Sep. 4, there were two COVID-19 positive people in custody.

There may be more active cases in the jail than what ACSO reports. These cases may be undetected because (a). individuals are asymptomatic or (b). individuals refuse testing to avoid isolation and quarantine if tested positive.

Testing would need to be more widespread to confirm the true number of infected individuals in the jail so they can be separated from those more susceptible to the virus. Furthermore, to encourage testing, quarantine protocols must be altered so individuals do not fear isolation in quarantine, as incarcerated narratives have suggested.

As of Saturday Sep. 5, the jail population count is 1923 incarcerated people.

As stated in our weekly report last week, Commander Yesenia Sanchez explained that the increase in population is a usual occurrence in any given year.

Sanchez also stated that the number of bookings is increasing due to the fact that they are “holding onto large numbers of people destined to go to state prison.” The CDCR does not allow transfers between correctional facilities at this time. They are currently holding 99 people who are supposed to be in a state prison.

There are currently three confirmed COVID-19 cases among jail staff. Staff members who test positive may not return to work until they are cleared per CDC guidelines.

Testing among the staff is voluntary and staff members also have the opportunity to self-quarantine if they are showing symptoms of illness or suspect they have come in contact with the virus.

Commander Yesenia Sanchez said that they do not have data on how many staff members have chosen to self-quarantine  and stated that Human Resources holds that information. According to her, the Sheriff’s Office only has data for those who have been COVID-19 positive and quarantined by order.