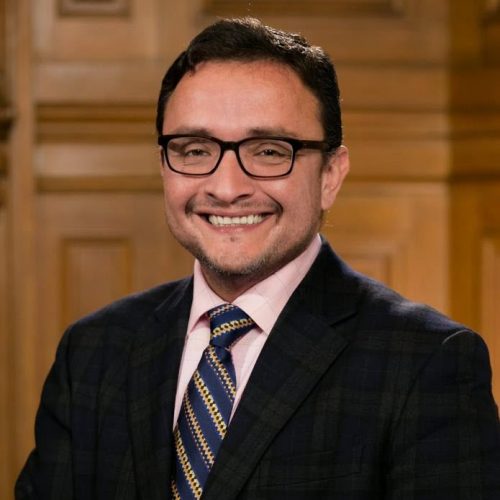 Campos was born in Guatemala and attempted to come to the U.S. at 11, when he and his family were deported after being jailed in an immigration detention facility. Three years later, at 14, Campos again came to the U.S., fleeing war.

Initially, Campos could not speak English; however, he excelled in the schools he attended in South Central LA, eventually earning scholarships to both Stanford University and Harvard Law School.

His career in public service began in 1999 when he worked as a Deputy City Attorney for the City and County of San Francisco. At the same time, he served as general counsel for the SF Unified School District. In this position, Campos managed the school’s day-to-day operations for the legal offices and oversaw the city’s school desegregation program.

From 2005-2008, Campos served on the SF Police Commission where he actively “worked to reduce violence in the Mission and to promote community policing approaches.”

As the first Central American member of the SF Board of Supervisors, Campos worked from 2008-2016 championing “groundbreaking policy on issues ranging from immigration; transportation; health care; gender equality, and the environment.”

In 2017, Campos was unanimously elected as the Chair of the San Francisco Democratic Party. One of his first acts as Chair was to “introduce a resolution condemning President Trump’s exclusion of transgender persons from the military.”

Since the beginning of the COVID-19 pandemic, Campos has served as Lead Public Information Officer for the County’s Emergency Operations Center which is responsible for the county’s COVID-19 response. In this role, Campos has overseen “all communications and community outreach.”

Campos also helped develop a Community Health Worker program that “conducts door to door outreach to prevent transmission in the Latinx Community and other communities.”

District Attorney Boudin noted that Campos “will play a vital role in implementing our vision of a decarceral, data-driven approach to public safety…[his] lengthy record of successful advocacy for the most vulnerable, his ability to unite others…and his extensive legal experience make him perfectly suited for our office…as we push for a more just criminal legal system.”

San Francisco Supervisor Shamann Walton commended Boudin’s new appointment and praised Campos’ work, “David is a visionary of reform and an advocate for equitable voice in government…[he] is grounded in community and understands firsthand as a person of color the implicit bias that exists within our systems.”

A previous colleague of Campos, SF Supervisor Hillary Ronen stated, “he brings vision, determination, and a sense of purpose to every role…he will be a real asset to DA Boudin’s District Attorney’s Office…”

Many community members paralleled these thoughts and emphasized Campos’ leadership in the Latinx community.

Lariza Cuadra, Executive Director of CARECEN SF – a resource center that supports the needs and rights of Latino, immigrant, and under-resourced families in San Francisco – praised Campos’ leadership in the Latinx community stating his track record is “clear evidence of his commitment to and success in engaging those most impacted in the process of informing, advocating and achieving ground-up policies that are responsive, timely and measurably improve the lives of ALL San Franciscans.”

Mr. Campos will start his new position on October 19.