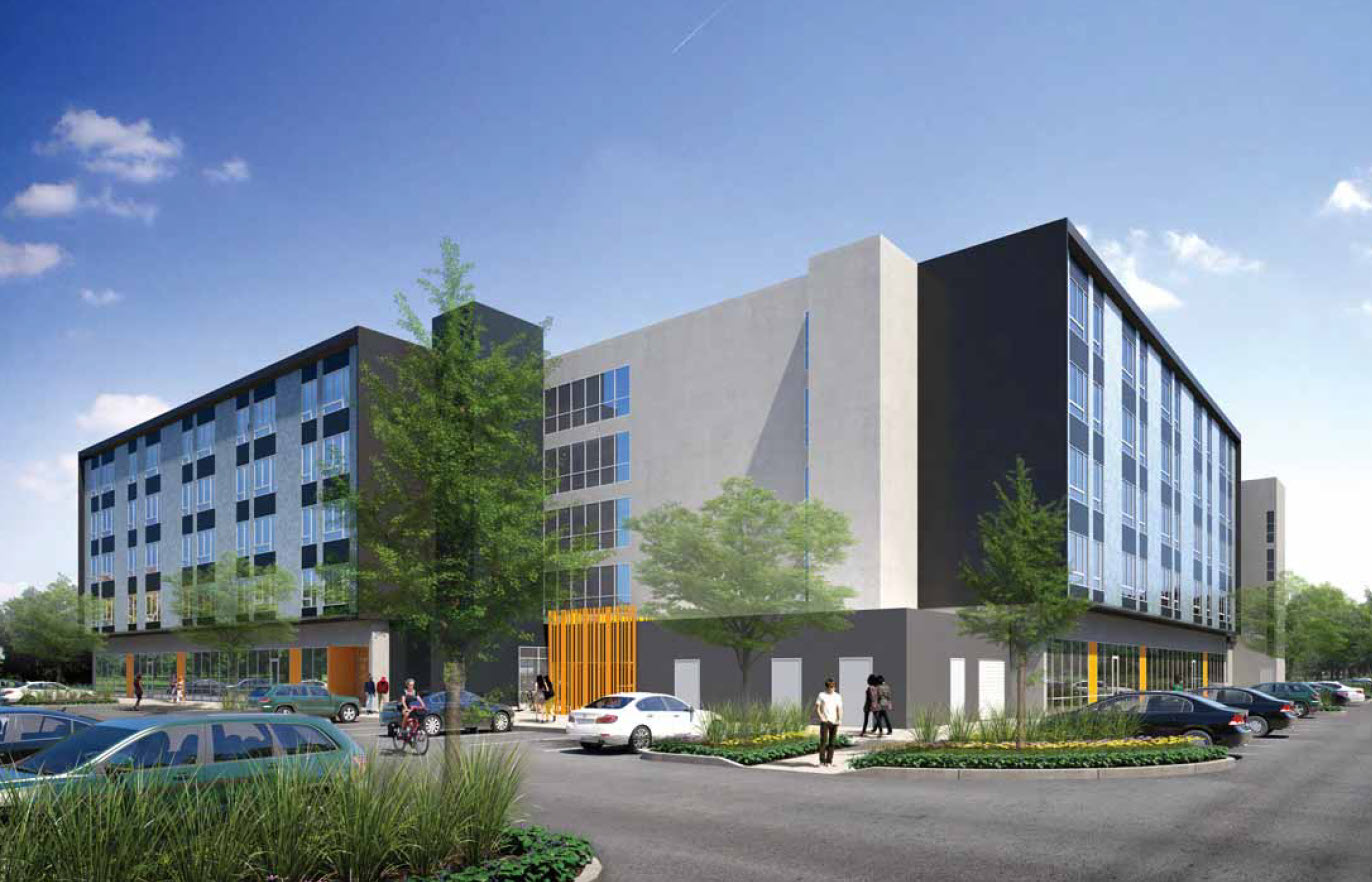 One commenter apparently was anticipating a long night for the University Research Park Mixed-Use Project agenda item, and called in to complain about a midnight vote after lengthy public comment—neither of which materialized.

While there were some concerns by the Planning Commission about aesthetics and lack of affordable housing, the applicant at Planning Commission promised to build a “beautiful” project and this time, the renderings were far more flattering even though the project design has not changed.

Mark Friedman of Fulcrum, the project applicant, noted that the project is located close to the downtown and the university.

“It creates a wonderful opportunity for tech and research companies to interact closely with faculty and students,” he explained during his presentation to council.  “Our major objective is to figure out how to continue to provide the kinds of amenities, lab space and office that will continue to make this a viable and desirable park for those who want to do research.”

The problem with URP, he said, was it was designed in a 1980s mindset with 16 single-story buildings and one two-story building.  He said, “It’s really not very respectful of the environment.”  So what they would like to do, he explained, “is densify the land use and to make a more vibrant environment.”

When they first purchased the property, one of the first things they did was go on a tour around the country of other research facilities and they found “it is increasingly important to have locations that have some kind of amenities and vibrancy.”

He said looking at places like Atlanta where Chancellor Gary May originates, he said it is very important to locate facilities and amenities in cities to attract young people who do not want to live in remote locations.

While this will never have the density of a place like Atlanta, he said one of the things they found attractive was “a campus style of development.”  Campuses, he said, are good at bringing people together and it’s that kind of design “that’s really really important for cross-pollinating businesses, for sharing ideas, and for promoting creativity.”

In this project, he wants to introduce a mixed-use element because “there really isn’t any kind of jobs and housing balance here.”  Many businesses expressed concerns about their own staff “being able to find affordable housing close to where they work.”  He said, “One of the needs of the project was to figure out ways to create housing that might serve the needs of the people who work here.” 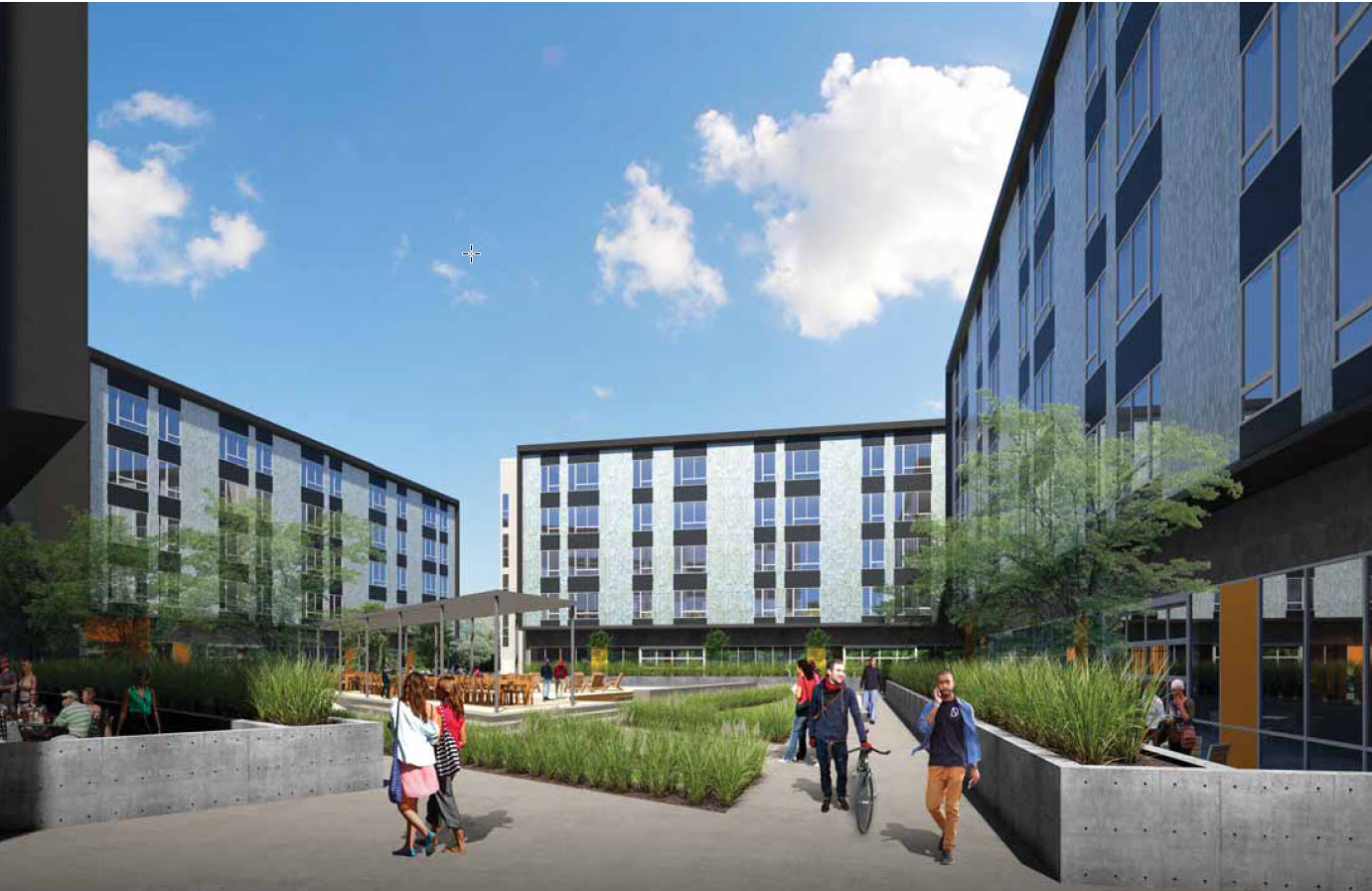 The buildings here are arranged in a “relaxed quad formation” and by leaving it open on one side it opens it to other people doing research at URP, as their goal is “create a mix of uses that bring people to this area on a daily basis.”

The ground floor could include a café, a child care facility, a co-working facility and an incubator.

“The idea is to create the kind of interaction that you might see in the Bay Area all the time,” Friedman said.

One of the concerns of the Planning Commission was about the aesthetics of the project.

Friedman admitted, “I thought the renderings of the project really didn’t do a good job of dealing with some of the attention to materiality of landscape and design that I know are inherent in this project.” 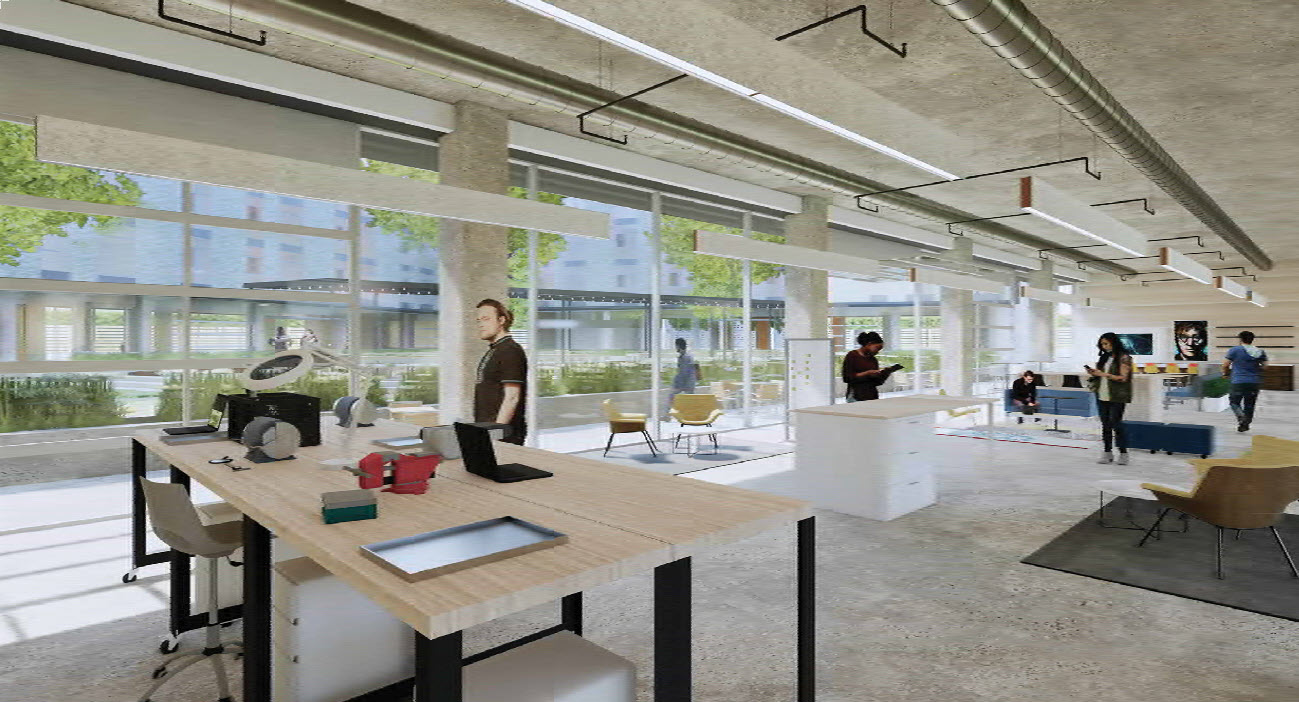 He noted that the inside material is a glass panel.

He said, “Unlike ceramic, because it’s translucent, it has a beautiful reflectivity that changes with the sun.  I think this is going to be a very very handsome project.”

Friedman said this project, by providing housing, “will enhance our ability to attract tech companies to the rest of the park.”  He added, “If this is successful, I hope, it will be a model for how we densify the rest of the project so that we can accommodate more uses—more research on this fine piece of property.”

Councilmember Dan Carson asked, “Why are mixed-use buildings like this expensive to build?”

Mark Friedman responded, “When you mix uses it is important to separate them for sound purposes, code purposes.  There is a lot of space that is required in terms of the floor plan to handle simple things like utilities.”

Carson asked how much of the current facility is leased up.

Carson also asked about the COVID factor.  He asked whether Friedman was comfortable that companies would be demanding this space.

Mark Friedman responded, “It’s actually interesting, at the moment I’m more concerned about the apartments than the lab and the research space.”

He noted that, the kind of tenants they have, “it’s very essential for people to come in and make sure their experiments are working.  That’s not something that you can do from home.”

But because the campus is closed, he said, as a result, “the residential market has begun to soften considerably.”

Davis has not experienced the level of this that San Francisco has, Friedman explained, he said said “it’s possible.”  On the other side of the equation, “the cost of new construction has not declined.  It’s still very challenging to figure out how to make the numbers work.”

But he believes in the project and the community of Davis and thinks that it ultimately will.

Perhaps the most notable part of the discussion was a public comment left by Larry Guenther, prior to the meeting, that seems out of place compared to the tone and direction of the discussion.

Larry Guenther said, “By short-circuiting the process, we have left far too many major issues with this project to be resolved at another late night meeting after hours of angry public comment.”  He said, “I believe major issues need to be resolved before coming to city council for final approval.  Trying to resolve these issues at midnight in a last minute scramble to get what few concessions the proponent is willing to give is bad process.”

It is not really clear what Guenther was talking about, however.  There were a total of six public comments—a few minor issues raised, but also a lot of support.

The council in fact asked for no changes, and the discussion concluded before 8 pm.

“It is almost midnight in Rio de Janeiro,” Councilmember Will Arnold would quip.  “I hope they’re still up watching.”

Mayor Gloria Partida added, “We talk a lot about process in our community and I have to say that it is something that we’re sometimes too good at.  Although I’m sure there are plenty of people who think that we need more process.

“We have to find the balance between shooting ourselves in the foot by not doing the things we need to do,” she added, including providing housing and “projects that we need in this community.”

She said, “I am pleased with this project – it is providing everything that we’ve been asking for.”  She noted we have been asking for workforce housing, infill and mixed-use projects which are very difficult to develop.

The council unanimously supported the project.