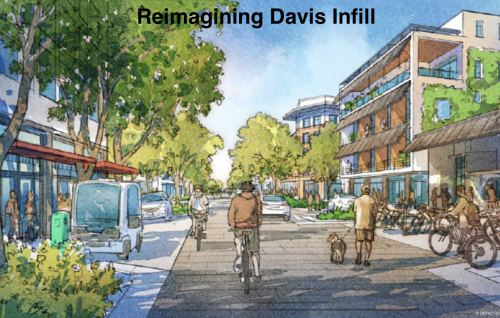 A 200-acre business park like DISC is not an objective in the City of Davis’ General Plan.  Additionally, DISC contains uses (housing, retail, parks, ag buffer) that require land that would not be needed with an infill model that uses existing parcels inside the city limits. According to the project’s own environmental review documents, the FSEIR, only 101 acres of the 200-acre DISC are needed for R&D, office and light manufacturing.  (FSEIR p. 2-21 and p. 2-254)

Since DISC is proposed to be built out in 4 phases over 20-25 years, 101 acres of land is not needed all at once.  For that reason, existing smaller parcels in Davis may be able to accommodate the initial R&D development and defer the need to consider DISC for a number of years … at a time when the impacts of COVID on market demand for Office/R&D/Flex space are much clearer.

The City, however, is not seriously considering meeting its commercial needs with infill of existing parcels, despite the fact that a 2019 City study enumerates 124 acres of vacant parcels inside the city limits. (FSEIR p. 2-21 and this LINK) This does not include City–owned properties and parcels that are underutilized and could be rezoned – for example the PG&E property on the edge of downtown nor does it include redevelopable properties already appropriately zoned.

Regarding the argument that the existing vacant parcels are not contiguous and some are small, one of the vacant sites is 27 acres, which would accommodate 26% of the proposed R&D and manufacturing sq. ft. from DISC. (FSEIR p. 2-254)

In justifying the conversion of 3820 Chiles Rd. from commercial zoning to residential in 2017, the City’s economic consultant EPS, who also did the economic analysis for DISC, stated “If the proposed Project is approved to accommodate multifamily residential development and 7.4 acres are removed from the office and R&D/Flex land supply, the City is estimated to have a 41- to 65-year land supply, all other assumptions held equal.” (page 14 of this LINK).  This could be even longer if this infill space was developed at a greater than traditional low densities.

The following pictures tell an important story about the current infill opportunity. 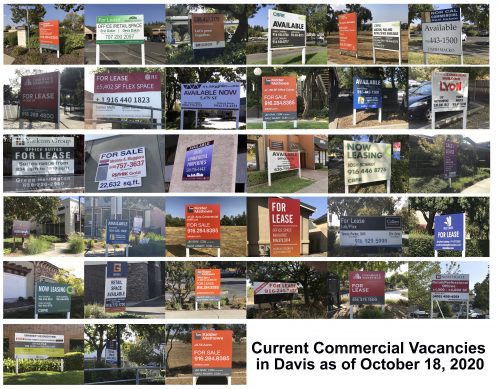 That story is that with the advent of the COVID pandemic, commercial spaces in Davis are rapidly showing up as vacant. The pictures are current as of October 1, 2020 … a total of 33 commercial vacancies with signs, and who knows how many without signs.

As a result, there is a real question as to how much commercial space Davis can absorb and retain going forward. We already know from the FSEIR that a substantial amount of existing commercial space is at risk of sustained vacancies if DISC goes forward, especially in the downtown area. We also worry that the retail component of DISC will make it difficult for our downtown businesses to

come back from COVID and thrive.

Further, the 2017 EPS report stated “As of the fourth quarter of 2016, the City’s R&D/Flex market experienced a vacancy rate of about 14 percent,” and that was before COVID. Reducing that vacancy rate to a more-healthy level of 5% or below is one of the business fundamentals that Davis needs to address with or without DISC. There is an excellent chance that DISC will actually increase the vacancy rate in the existing R&D/Flex space, while at the same time increasing the amount of urban blight in Davis.

Given these current market conditions, we strongly believe that our best path forward is to capitalize on our existing inventory and infrastructure and to focus economic development efforts on vacant and underutilized parcels already in the city. Infill is much more environmentally sound and would not cause blight in existing Davis commercial properties. . It would also achieve higher tax revenues for the City budget because there would not be required tax-sharing with the County as there would be for projects outside the current city limits like DISC. Please vote No on Measure B and put the city on a path to achieving the infill development vision in the General Plan!

Pam Gunnell is a retired Science teacher who also served on the Davis Planning Commission for several years.

Richard McCann is an economist focused on energy, water and environmental policy issues. He has been a member of several City commissions and task forces, including the Utilities Commission and is now on the Natural Resources Commission.

Matt Williams is a member of the City’s Utilities Commission, as well as a former Chair of the Finance and Budget Commission (FBC). He is retired after spending over 30 years in the management of healthcare practice, healthcare finance, and healthcare technology, as well municipal finance.

9 thoughts on “Guest Commentary: Davis Can Meet Its Commercial Needs without DISC for Now — Infill Is a Better Choice”